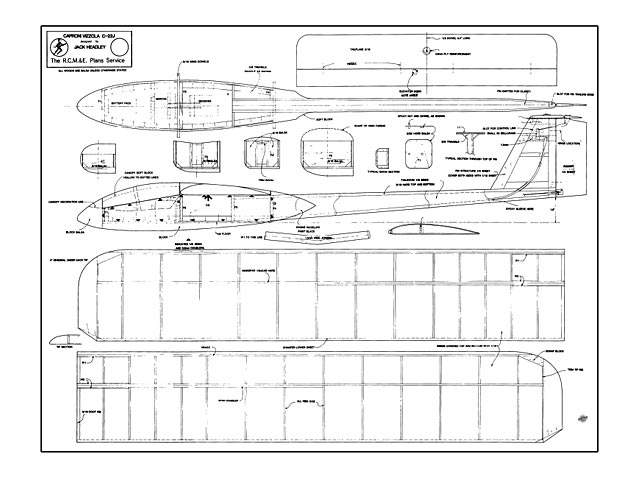 I WAS FIRST ATTRACTED to the C-22J when browsing through a copy of Air International in our library (Feb '81 issue, if you want to look it up). A first glance at the splendid colour shots of the plane flying over the Alps led me to believe it was a glider, but after spelling out a few of the words, and looking closely at the drawing a couple of (wait for it) Klockner-Deutz KDH-317 turbo-jets were discovered behind the armpits of the wings. A well disguised dorsal NACA type inlet, invisible on all the photos, supplies air to these engines, which is later ejected through two, equally well disguised, exits alongside the tailboom.

These latter features, plus the camouflage colour scheme switched on my brain to the possibility of making a slope soaring version of the C-22J, no inlets or exhausts to build, a simple pod and boom body, and whoopee! a parallel chord wing; what could be simpler.

The article wasn't unfortunately accompanied by a three view configuration drawing, but later on in the same magazine, amongst a flock of other trainers, a drawing was discovered. But what a disappointment! Instead of the elegant glider type shape I'd been expecting here was a large dumpy body, with a small boom/fin, and tiny wings.

However, never being one to let the facts stand in the way of a projected model I whipped out my trusty semi-scale ruler (made of the finest Dunlop rubber), and stretched the dimensions here and there, mainly there, until a shape that matched up to my expectations was achieved. If you ever get around to comparing the model shown here to the actual full scale version you will see that I did take a few liberties, but it's all in a good cause after all. The model is pretty simple to build, being all balsa sheet and blocks. I started by making the wings, so this is where I'll begin outlining instructions.

Wings: These basically consist of upper and lower 1/16 in sheet skins, a few ribs, and a full depth Vain, sheet spar. As the span is only a little over 6ft, a single piece wing is quite practical, and should fit into almost any car. I use this justification for all my glider wings, regardless of size, as (1) I don't like to build wing joiners, and (2) I do have a giant Chevrolet station wagon.

Back to the balsa. First select the sheets to make up the wing skins. Use the tough stuff for the flat bottom bits, and the more flexible for the top skins. Four skins are needed, each 3 ft long, and about 7 in wide.

Pin one of the bottom sheets onto the plan, then make up the main spar from 1/8 in sheet, and glue this into place. Naturally with the sheet in place you can't see where to actually glue this item down, ditto the ribs, and this is the reason for all the small marks drawn around the wing plan to locate these items. Add the W2 wing joiners on each side of the spar, then cut the front spar from 1/8 in sheet, and cement this into place, together with wing joiner W1. All the ribs are now made and installed. Note the small balsa block at the tip, which is added now. When this is all dry bevel the front spar as indicated in the wing sectional view, then glue the top skin into place. Finally add the true leading edge, and the block wing tip, and one wing panel is complete.

The other wing panel is built in a similar way, except that the first panel is attached after the front and main spars are laid down. The first panel needs propping up at the correct angle during this operation, and this is obtained by using a block 8 in. high under the tip. Sanding the leading edge as shown on the plan, then a light sanding all over, finishes off the basic wing construction.

Fuselage: This is made initially as two items, the front pod, and the tail boom. Begin with the tail boom, which is built as a simple box, with 1/8 in sheet sides, and 3/16 in sheet pieces top and bottom. Note how these top and bottom pieces taper locally at the fin station. Only add one of the 1/8 in sheet sides at the base of the fin at this time, so that the elevator control run can be installed, after the fin has been attached. Don't as yet sand the boom to its final contours.

The pod piece has some highly contoured sides, so choose some suitable wood for these items. To help form these contours 1/32 in ply doublers are first glued to the 1/8 in sheet sides, with the pieces held in a curved position, approximately that of the final shape. This can be done with some suitable weights and blocks. While these sides are drying the fuselage floor can be cut from 1/8 in sheet, and all the fuselage formers. Pin the floor to the building board, then glue the tail boom into place followed by all the frames. Block up the end of the tail boom as shown on the plan. Add the fuselage sides now, then the 3/8 in triangular reinforcement pieces. Soft balsa blocks, aft of former 4 are used as simulated engine nacelles. Other blocks are needed for the fuselage bottom, and the nose, and these can be added now. Former 2 is shown on the plans as a solid item, however suitable holes will be needed to anchor the (flexible) snake outer tubes, and to pass wires through.

Again a lot of sanding now to get the fuselage into its final contours. The partially constructed fin is now attached. When the fin assembly has been com-pleted, (see later), the wing can be fitted to the body. Trim former sides until a suitable fit is achieved, then make the cockpit canopy, followed by the two small fairings on the wings.

Tail pieces: The tailplane and elevator are made from 3/16 in sheet, the elevator being sanded to a wedge shape, all other edges are rounded off. This completed item is attached onto the top of the fin by a small bolt, to a nut epoxied underneath the tail platform T1. A small 1/32 in ply washer is glued on the top of the tail for the bolt to bear on..."

Plan from DBHL, cleanup by Circlip. 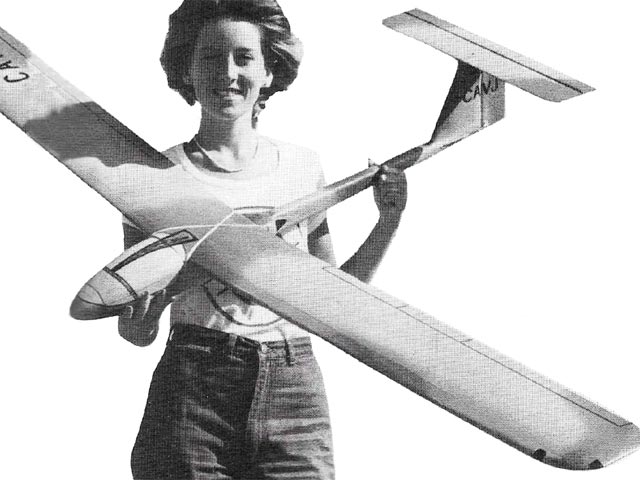