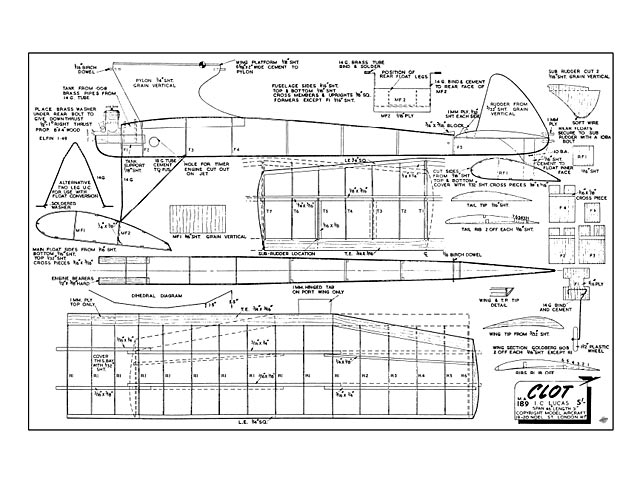 THIS design was laid out with a view to use in both the FAI power contests and the 1.5 cc limit contest introduced by the SMAE in 1951. The prototype test flown only a few days before the competition placed 7th out of 163 entries in the 1951 1.5 cc contest with an aggregate of just under 10-1/2 minutes despite the fact that full power could not be employed as the model had not been fully trimmed. In the only other contest entered, the 1952 Power Eliminators, the model placed first among the SE Area entries and was lost. A second model was built and was fitted with the detachable float gear used on the prototype. However by then the use of the Brighton club's flying ground with its pond was lost. Rather than risk losing the seaplane it was not used in its landplane form in any contests in 1953.

Eventually a suitable pond was found in September and a belated attempt was made on the British FAI floatplane record but due to the turbulent air surrounding the new site a clean climb of the water to miss the steeply banked bowl of the pond could not be achieved at the first attempt. Further test flying was carried out withal tered rigging to obtain a quicker ROW and a further attempt was made in October. The seaplane made a perfect take-off at the first attempt easily to beat the existing record with a time of 4 min 58 sec, the dethermaliser operating at about 4 minutes.

Due to the heavier weight of the 1.49 Elfin (now used) and the Mk.II Javelin over the Mk.I used in the prototype, the construction of the tail has been strengthened to keep the CG position correct. However two Mk.II versions are now flying with lengthened fuselages and redesigned tail surfaces in readiness for this year's contests.

Construction: The fuselage is built on the usual sheet box principle popularised by Lew Mahieu in his Zeek (oz5040) as this seems to produce a strong and light structure with the minimum of work. The rest of the structure is conventional and at all times the object has been to keep the building time down as much as possible. The wheels are retained by screw collets so that the float gear can be attached in less than five minutes and when fitted in no way affects the trim of the CG position.

Balsa wood of about 8 lb per cu ft should be used throughout except for the wing lift spars and the wing platform for which medium stock is required. No.2 Clot built hastily from unselected timber, despite being covered throughout with lightweight Modelspan came out over 1 oz overweight without being any stronger. Take care therefore to select lightweight wood of good quality.

Covering: The wing, tailplane and the bottom of the main-float are covered in heavyweight Modelspan and the rest of the model in lightweight. Two coats of clear dope are given all over followed by one coat of banana oil on the wing and tailplane and two or three coats on the floats. The fuselage, fin and parts of the underside of the wing centre-section and tail where fuel or oil soaking are liable to occur are given one coat of fuel proofer.

Trimming: The tail should be keyed in position with 1/16 in dowels and there should be no offset to the fin. The port wing panel between the centre-section and the outer dihedral break should be washed in, about 1/8 in is adequate. Only 1 degree side thrust is required but 3 or 4 degrees of downthrust should be set in to the motor. In test glides the model should have a gentle turn left with a tendency to stall. If under-elevated increase the wing incidence by 1/16 in and if over-elevated pack up tailplane leading edge by 1/32 in. Make sure the CG position is where indicated on the plan.

When the glide is correct add a small amount of plasticine to the floating tab on the port wing, and then try under low power with an 8 sec motor run. Model should climb and glide to the left. Any tendency to stall on the glide can be corrected by increasing the weight on the floating tab and tightening the glide circle. The climb should be adjusted to a steep left hand spiral by increasing the downthrust or decreasing it as required. " 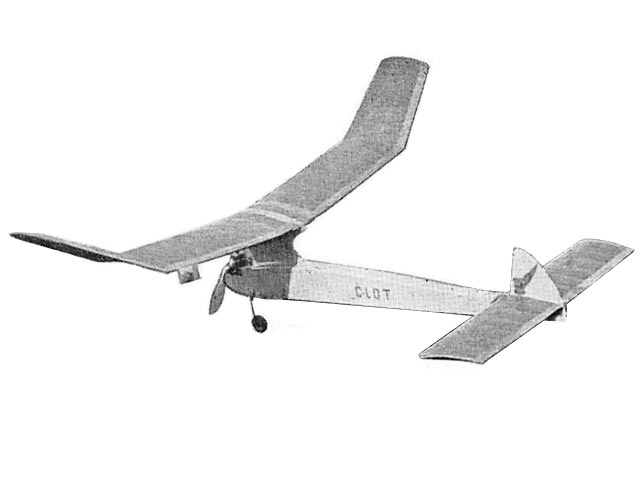