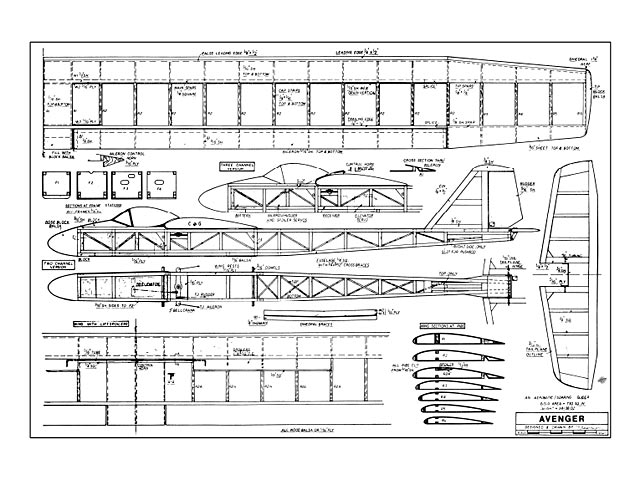 Quote: "Third in a series taking two years to develop, our Aerobatic Slope Soarer lives up to all its promises: very effective performance! The Avenger, by Jack Headley.

The Avenger is the third in a series of models built over the past two years to explore the possibility of producing a sailplane suitable for both Slope Soaring and Aerobatics.

My experience before beginning these models was mainly with Slope Soaring, but I'd reached the stage where I wanted to do a little more than just soar around the sky, with a few loops and spins thrown in now and again, so I thought that a more or less standard slope soarer with aileron control might be a bit more lively. And it was!

A model was designed and built which had almost full span ailerons, no rudder, and a normal elevator. After a few practice sessions, it became very obvious that the aileron control did indeed give considerably more maneuverability. During the past two years the model has been flown many, many times; recently a friend modified it to coupled aileron/ rudder control, and this seems to have increased the agility of the model even more.

We'll draw a veil over the next model, which was supposed to be even more acrobatic, but didn't turn out that way, and come to the current design. Here we went back to the basic layout of the first model, and made the following changes to increase the performance:

1. The wing area was increased to reduce the overall wing loading.
2. Slightly larger ailerons were used to in-crease the rolling power.
3. The wing was stiffened to increase the flutter speed.

In addition, an all-moving tail was added, mainly because I'd not tried one before.

The resulting model, called the Avenger, is the design we present here. It's now been flying for a couple of months and shows considerably promise. If you're looking for a slope soarer with a difference, this is it!

Fuselage: The fuselage is constructed mainly from 1/4 in square stock, so first select a few lengths of good quality wood, then begin by making the fuselage sides. At this stage put in only the 1/4 square pieces (the cross-bracing comes later). When the two fuselage sides have been completed, sand away the surplus cement, then join together using the various frames. You'll note on the plan that some of the frames have holes for the control runs. These may be satisfactory for your particular radio or they may not, so be prepared for some possible revision later on.

The top line of the fuselage is flat, so that joining the sides can easily be done on the plan, with the body upside down. When all the cross pieces have been put in place, a further light sanding of the joints will prepare the body for the next step, which is to cement on the 1/16 ply floor, and the 1/16 sheet piece behind it. Then remove the body from the building board, and in-stall the 1/4 x 3/32 cross-bracing, and the 1/16 sheet sides. The nose block is made from hard balsa, and can now be attached. To reduce wear in the wing region two strips of 1/4 x 1/16 ply are cemented to the top of the longerons.

Add the bellcrank mounting plate, which is made from ply. Next, at the aft end of the fuselage, we need to provide the slot for the fin, and also the tailplane mounting. Strips of 1/4 square are used for the fin support, and 1/4 sheet for the tail mount. Before in-stalling this support be sure to put in the 1/16 tube which provides a hinge for the tailplane. The photos and plan show this a little better than I can describe it. Add the wing dowels, and that's about all for the fuselage.

Wings: Now for the wings; here we'll just talk about the plain wing, no spoilers. In later paragraphs we'll discuss the modifications necessary to include the spoilers in the wing, and also how to build the ailerons.

The plans show the right wing only (I'm a conservative); the left wing is built on the back of the plan in the usual manner. Each wing half basically consists of two sections (although it's built as one piece), these being the inboard parallel chord section, and the tapered wing tip. The parallel chord piece is the more strongly constructed, with a full 'D' section leading edge, and capped ribs for both torsional and bending stiffness. The wing tip is more lightly constructed, with smaller spars to help reduce the rolling inertia. 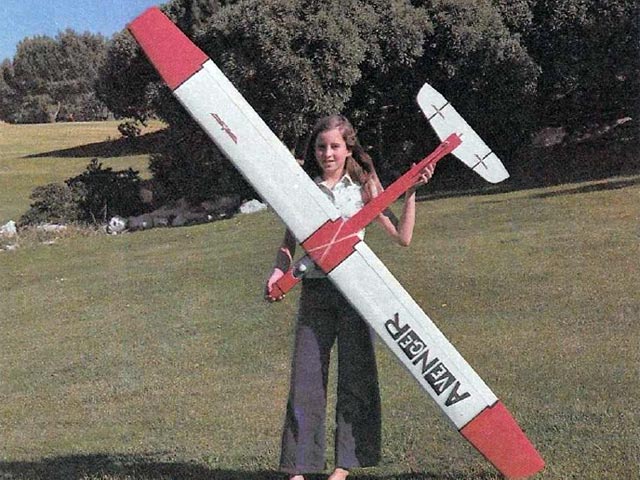