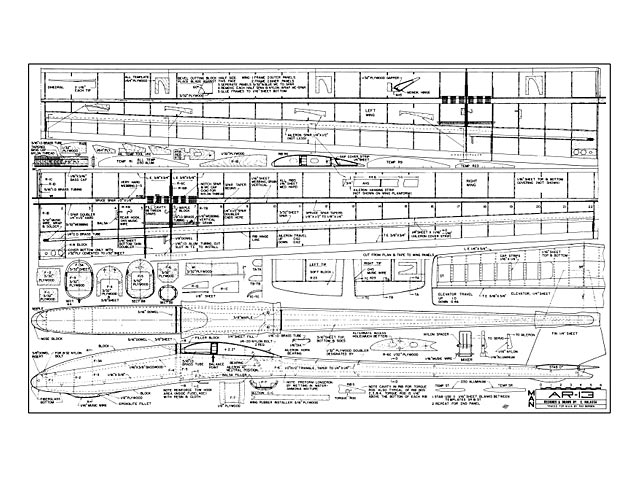 Quote: "An interesting article covering the complete details of the development of a soaring glider that combines stunt or aerobatic capabilities along with thermaling. AR-13 RC Glider, by Edward Kolassa.

Right from the beginning it was decided - an attempt would be made to add the roll maneuver to soaring. The key word is soaring, and here it implies the ability to stay aloft in weak lift. Slope lift usually is not weak lift; therefore the objective was to add the roll maneuver to a glider with a decent sink rate. AR-13 has a decent sink rate - not super, but decent. Not quite as good as the good old Cirrus (oz8532), but fairly close to it. And the comment heard most often at the flying field, practically said word-for-word by everyone, is: Wow, what a flat turn.

And it will do a good roll. This project began many moons ago and included the construction of several air-planes. The initial attempt was the first glider I had seen in the flesh, so it can be said that the starting point was zero. My lack of glider experience (though macho power experience) delayed the project somewhat. But it was time well spent, and that is what the hobby is all about, isn't it? Doing your thing and, in this case, at a leisurely pace.

The first plane, Power Off, exhibited a definite power model influence as well as a lack of glider design background. I thought that an 18% semi-symmetrical airfoil used in an 80 in wing with generous dihedral would be enough to generate a roll if ample rudder was used, but the roll and the sink rate were poor. The poor sink rate was expected, but the inability to generate a fair roll was disappointing. After diving the model to generate sufficient speed, full-rudder deflection produced the first half of the roll, but the model was reluctant to go farther. Previous experience with rolling rudder elevator power models led me to ex-pect more, so I tried to figure out the cause of this model's poor performance, and it was - drag, which could be directly at-tributed to the wing's semi-symmetrical air-foil whose thickness ratio is a big, fat 18%.

While there are some benefits to using an airfoil this thick on some power models, there are few reasons for using anything over 13% on model gliders. (In fact, it is difficult to think of one.) Also contributing to the total drag picture, aside from the obvious boxy appearance, is the stationary propeller, The smallest diameter and highest pitch were chosen to minimize this effect, but unless the prop is folded or the prop engine combination retracted into the model, there is no getting away from this energy-absorbing device.

Something else to consider is the relatively low (for gliders) aspect ratio (10:1) of the wing. The thinking around here is that for a given aspect ratio there is a higher induced drag penalty for a rudder roll as compared to an aileron roll because the up-moving panel in a rudder roll operates at a higher angle of attack (hence higher induced drag) than the up-moving panel in an aileron roll. Put the other shoe on, and the relatively low AR of 10 becomes a relatively high AR of 10 when damping in roll due to span is considered. AR-13 established that the aspect ratio chosen for Power Off was not excessive, and damping in roll, due to span, was less of a factor than the excess drag picture.

At the time, I thought about cleaning up the design and proceeding in the same direction - that is the rudder roll - and looking back, it probably would have worked. Instead, I decided to investigate the properties of an aileron roll in a glider, and subsequent events indicated that this was the way to go.

Not convinced yet that the semi-symmetrical wing section was a poor choice, one of the new Wortman 15% laminar flow airfoils was tried on a second model, called Stage Two. While Stage Two was much cleaner, in order to make launching from a small field possible and to insure adequate stunt height on every launch, I kept the same drag-generating prop/engine combination. Ailerons and rudder were not coupled, so each could be studied for its contribution. Elevator was the third and final control included.

I was apprehensive during this model's first few flights because a coordinated effort of aileron and rudder was necessary to effect a turn. The small dihedral prevented the rudder from being effective by itself, and the almost nonexistent aileron differential made aileron turns look like a banked, straight line. All the control functions, aileron, elevator and rudder, were needed simultaneously to make any turn, so a fair amount of flying skill was required. The pilot furnished by the engineering department was inexperienced and had difficulty coping with the situation.

To offset the flying problem, 45° output arms were used on the servo, so now the ratio of 'up' aileron to 'down' became roughly 2 to 1. The change was enough to counteract the reverse yaw due to the ailerons and add a little yaw in the direction of the turn. It had the same effect as putting in some rudder control with only the ailerons being used. The engineering department and its pilot could breathe easier now..." 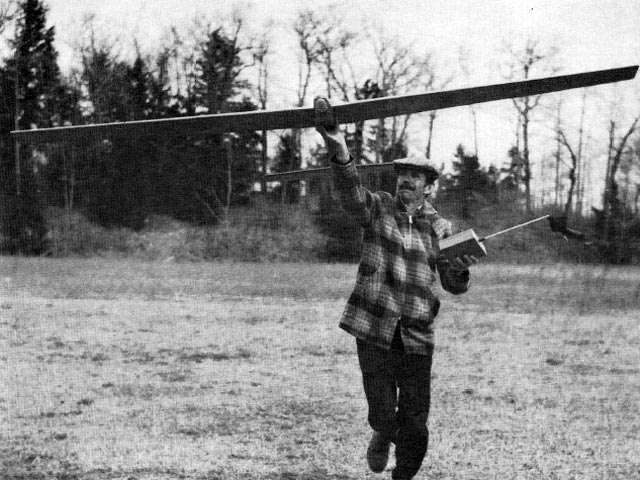