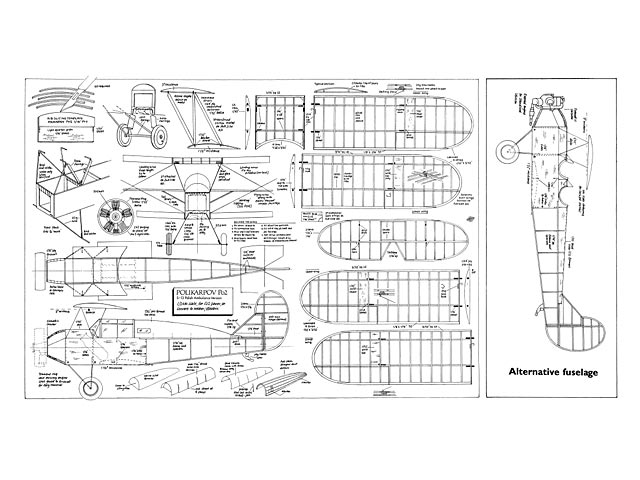 With 40,000 built, the Polikarpov P02 holds the record for the largest production run in the history of aviation. Conceived as a primary trainer, it first flew in 1928 and, with some minor changes, remained in production until 1955.

Unlike other countries, Russia had no qualms about women in combat, hence the highly effective lady tank commanders and the squadron of Po2 bombers flown entirely by women against the German invaders. The harassed Germans called it the 'Sewing Machine', because of its engine sound.

During the Korean War, American troops nicknamed the Po2 'Bedcheck Charlie'. The enemy flew over at night to spray machine gun fire and drop grenades.

Many thousands learned to fly on the Po2 and pilots said it was inherently stable, with only limited aerobatic ability and rather insensitive controls, Such extensive production probably ensured the easy availability of spares throughout Russia and her satellite states. It flew in East Germany, Czechoslovakia, Rumania, Hungary, Communist China and North Korea. The Poles built 500, post-WW2, in several versions including the S-13 Ambulance, that was chosen for this 1/24th scale Co2 scale model.

Good proportions: No way is the Po2 a thing of beauty. In fact it's a bit of a donkey, a clod-hopper, a hill-billy. But it does have character in abundance. It also has perfect proportions for a free flight scale model without the need to enlarge anything from scale outlines. Wing area is ample, there's two degrees of dihedral and stagger, plus very generous tail areas.

The structure lends itself well to model work. The fuselage of the full size is ply-covered forward of the lower wing trailing edge - just where a model needs strength. The rest is fabric covered, except for the hinged top deck, which is ply. Wings are a traditional two-spar structure, fabric covered.

Best of all, there's an excellent set of drawings by F Pourlowicz that show several variants with colour notes, construction, instrument panel and even manufacturer's logos.

The model: 1/24th scale produces a wing span of 18.5 inches (470mm), ideal for the Telco motor used in the prototype model built back in 1982. The Pawlowicz drawing also came at 1/24th scale so the model was traced from the scale drawing.

For an R/C model, it has some attractive features, such as external control horns and cable runs for rudder and elevator, which could be reproduced true-to-scale. At quarter-scale, the wing span works out at 112 inches, a size that would make it a great glider-tug for towing vintage scale sailplanes.

California bound: My prototype model was taken to San Diego, USA and flown in competition at the famous Mile Square flying site. The Americans were quite amused to see how it all fitted together with working rigging, because most US models are made in one piece.

Bill Hannan found me trying to rig it for the comp. but I was shaking so much with nerves, that I could hardly manage it, They gave me a special prize called the 'Pressure Prize' that was a rubber face squeezed into a small bottle. That was in 1983 and the warmth of the welcome I received from the Scale Staffel in San Diego still glows today.

The Nats: In 1992, I cleaned it up and entered the Indoor Nationals, where it won 1st place. I can remember it taking off smoothly and slowly climbing up and up, cruising just below the roof girders at Alumwell, while I stood, knees knocking, until it came in for a perfect landing and a big round of applause. I have never managed to get it to fly so well since that memorable day.

Building guidelines: The Po2 is for experienced builders. We all have our preferred methods, so I will keep these notes brief. My prototype was built as the drawings and weighed 1.75 oz (49.6 grams).

Fuselage: Make two sides and join with formers A and B, identical except for the 1/64 doubler for the undercarriage, which is fixed to B, before the sides are joined. Pull in at the rear, add spacers top and bottom.

Shape the cabanes, using a card jig to set three degrees of wing incidence. Solder only when you're sure you've got it right and fix to the top of formers A and B.

Laminate the nose, shape and hollow, fit to A. Face the nose with 1/32 ply firewall using blind nuts on the back of the engine mounts.

Next, install the CO2 unit. Mine is fixed, but you can make it removable if preferred. It is a good idea to have the bottle on the balance point (CG). Test in-situ, then remove the engine.

Fit the front decking. Laminate three hoops for the cockpit. For the rear deck, follow the sequence on the plan. Detail the cockpit - mine had instruments, pilot and patient on a stretcher, with blood-stained bandages. Sheet the underside to the trailing edge of the lower wing.

The Townend Ring is made from laminated sheet balsa, while the dummy crankcase is a push-fit over the Co2 engine, but spot-glued to the firewall. Cylinders are balsa dowel wrapped with thread, pushrods are wire and oil cooler is balsa.

Wheels are laminated ply/balsa and the wheel discs are moulded in acetate.

Fair the cabane struts with thin card, while the undercarriage is faired with balsa dowel and tissue wrapped. Make the tailskid from ply, let into a slot in the sheet balsa in-fill under the tail.

Centre section: Make eight solid ribs from 1/64 ply. Clamp one batch of four ribs and drill for a 1/16 dowel plus a pilot hole for the hook. Mark these four ribs 'top', then do the same for the 'bottom' set. Take two ribs from each set and enlarge the pilot hole so that it will accept the wire hook with the wing-retaining band.

The centre-section has solid balsa ribs (with holes for the bands) and two substantial spars of hard balsa or Bass. The trailing edge is laminated. Cap ribs in 1/64 balsa finish this component which is then bound and glued to the cabanes. Use packing, or cut away spars slightly to achieve three degrees incidence, without a trace of twist and glue only when the correct angle is set.

For the lower wing, glue one 1/64 ply rib to the fuselage each side, with only 1.5 degrees incidence, taking care to get the same incidence angle on both.

Wings: Ribs are 'sliced' as shown on the plan. Tips are laminated. Angle the root ribs to 2 degrees dihedral and add reinforcements for rigging hooks and strut ends. Fit hooks and dowels. Note: if these methods do not suit your chosen scale, or you want a simpler model, please adapt to suit. You could add separated ailerons, hinged for trimming, but the original S-13 had 'slotted' ailerons.

Tail surfaces: These have laminated outlines, firm spars doubled at the centre. The elevator and rudder could be hinged if you prefer.

Brush-paint the blue and black. Curved blue lines are drawn with a lining pen (slightly thinned blue Humbrol matt) working against a card template raised off the surface slightly.

The Polish Ambulance Service lettering was applied with a Mapping pen, using matt silver-grey enamel. The registration codes on the fuselage sides are blue (top half) and silver-grey (bottom half). This was brush-painted, but might be better done by mask and spray. Other details were brush painted.

Details and character: The Pawlowicz drawings show a wealth of detail, and character of the Po2 depends on this detail. Note the elevator trim-tab arrangement with its exposed cables and bright red tabs.

Rigging: My method is fiddly and tiresome to put together, but it does survive bad accidents because it all springs apart and absorbs shocks. Wings are held in place by small bands through the centre section and fuselage. Landing wires are of fixed length, adjusted to give correct dihedral on the bottom wings. One end is tied to the cabane, while the other loops over the hooks on the wings. Interplane struts are then fitted (mark 'Port', 'top' etc). Then add the flying wires, which have elastic shirring thread at their centres, passing under the fuselage up to the hooks on the top wings. The flying wires pull down against the tension of the landing wires. I use grey button thread. Try to avoid 'hairy' thread. Many prefer fishing nylon, which comes in a wide range of thicknesses.

Flying: I trimmed my model outdoors, over grass during late evenings when there was no wind. Co2 models are best trimmed with low power. Test glides won't help much because models so powered have some power on, even during the landing.

All my model needed was a little nose weight and a touch of left rudder, but I must confess, the trim seemed to change for each flying session. Perhaps the working rigging tends to create warps and a more rigid arrangement would give more consistent performance. However, biplanes can be temperamental, it's part of their nature. Happy landings!" 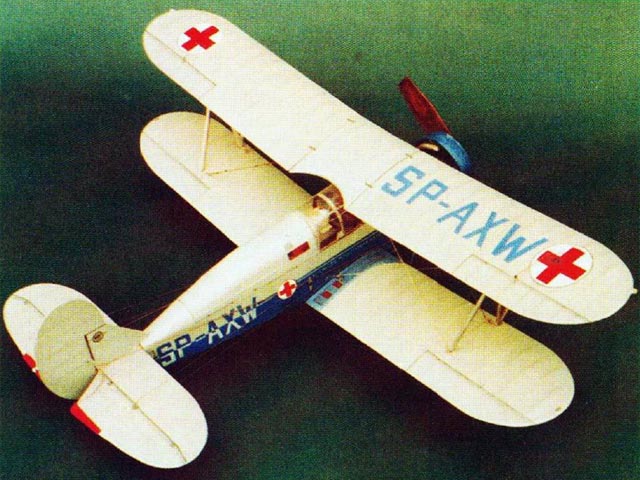