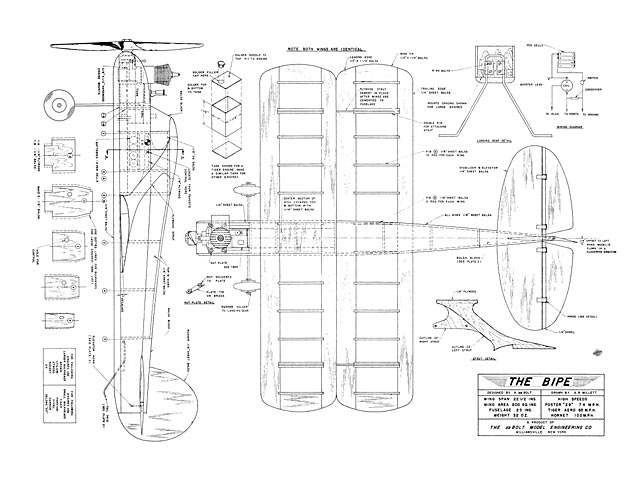 Quote: "The Bipe was first designed in the early forties as a compact, simple, control line biplane which wouldn't use up too much precious balsa wood in its construction. WW-II was a challenging era for modellers, especially C/L modelers who were just learning the basics of this new form of flight.

It has been said many times before, free flight was king prior to WWII. We all thought that F/F was great, of course, and enjoyed it very much. The War killed F/F and served as the stimulus that the embryonic control line movement needed. Obviously, with the phase practically dead, F/F saw little development during the war years. However, with the shift of interest toward C/L, there came rapid development in that phase, especially with so much to be learned about the radical, new method of flying. The excitement came from the modelers who were learning more about it each day, or so it seemed. This could easily be where our favorite query - What's new? - originated. In those days, you asked the question, and really did get a thrilling answer!

There was all sorts of action within the Patuxent Model Engineers during the war, as their primary interest was control line. This was a progressive club; its members created new C/L designs prolifically, and flew them with equal fervor. It had to be progressive and innovative, with C/L so new there had been only a few kits manufactured. and the war had stopped what production there was.

With the C/L phase so new, the emphasis was toward what we would label 'trainers' today: something which you could learn to fly with, enjoy the excitement of, and bring home in one piece, along with a handful of busted props. The Patuxent Sailors (also known as the Navy Patuxent River Model Engineers, the first Navy model hobby group. wrf) put together various sorts of 'designs' for this purpose, some were OK, and others simply did not cut the mustard.

By this time your author was an accomplished C/L pilot, having learned the basics with a Stanzel Tiger Shark (oz302) and some other thing he had created with which to learn more about 'U-Control'. So, the urge for something different kindled more investigation into the aerodynamics of C/1. designs. No thought was given to creating a design which would appeal to others, or be commercially viable.

At that time, biplanes were a rarity in free flight, and nothing was known of them in control line. Yet, when this experienced free flight designer looked at the design needs for C/L the basic characteristics of a biplane seemed to be a good solution. Remember, the available power in those days was anemic. The required ignition system was heavy, and its size could use much precious balsa. The cost alone did not make the balsa so precious, but its lack of availability likened it to Gold! You really had to scratch for every piece you got.

As a designer facing such problems, the advantage of the great wing area offered by a biplane was attractive. If you had high weight, and little power, aerodynamics said to use wing area as a substitute for the lack of power. The idea seemed sound, and the thought of building a 'two winger' probably clinched the decision. The only problem was that there was no design data readily available for biplanes, simply nothing to use for reference.

The Patuxent River Test Center came to the rescue. Our division library had some aircraft engineering books, and there were a couple of biplanes kicking around the dark corners of a hangar. Study it all, and one could assume the basic design factors for a double winger.

The effort which went into the Bipe design would be an interesting lesson in using aerodynamic principles. The additional factors which come into effect when additional wings are used, include wing gap, stagger, and decalage. Probably the paramount consideration is wing gap, for it can have a direct, negative effect on wing efficiency. Assuming one wing to be directly above the other, 1-1/2 chord widths of gap is required to obtain 100 percent efficiency from both wings (ie no interference between the two wings). Reduce the gap to one chord width, and the efficiency drops to 80 percent. Stagger is a sneaky way to reduce the gap effect. If the wings are not placed directly above each other, there should be no interaction to speak of. If this is true, then any amount of stagger used in a design should be advantageous in this respect.

Decalage is the preset difference in the angle of attack of the two wings. One wing is given a greater angle of incidence than the other. If you were to aim for 100 percent biplane efficiency, you would find the necessities cumbersome to use, especially in a practical control line model.

As this was an INITIAL investigation into the use of a biplane for control line flying, the way in which the laws were juggled to obtain a useable model (which did not violate any rules) is of interest. Today, things might be done differently because we have experience to draw on, without it, however, you had to follow the known rules just to be 'safe'. Remember that in the beginning there were no aerodynamic laws, no one could set them down on paper. The laws were created by experience only. Even today, new experiences can alter or add to the laws, as has already happened when aircraft reached the sonic range. However, at this time, and for our purposes, things are now fairly settled.

The Bipe design was an attempt to create a desirable craft while staying within the rules of that day. First priority was the need to design a compact control line model, a large wing gap would negate that design objective. Secondly, cabane struts are a perfect pain, the use of a 'cabin' instead is so much more practical. Hence, you see the use of 100 percent wing stagger in this design which theoretically allows much smaller wing gaps, and eliminates the need for cabane struts.

Note that the Bipe uses two degrees of negative incidence in the rear wing for this purpose. Negative incidence can be used in this case because the airfoil used for both wings commences lifting at about four degrees negative. At two degrees negative, that rear wing is still providing lift, which will increase drastically when raising the nose, and increasing the angle of attack. Remember, at this point in C/L development you only concerned yourself with right-side-up maneuvers, as up to that time no one had flown inverted!

Along the way, we saw a demonstration of this stability factor. One of the Patuxent modelers was flying a Bipe, when somehow he lost an entire half of the horizontal tail. Flown without it, the only apparent difference was a bit of control response sluggishness when performing a loop.

One thing that you can do when talking about something which happened in the beginning is see how things have changed. Is everything really better today? Remembering that the first Ukies were designed by free-flighters, some of the thinking had to be influenced by what they knew to be fact from their limited experience.

Jim Walker was 'Mr U-Control', and he pointed the way for the rest of us. For whatever reason, Jim commenced C/L flying in a counter-clockwise direction, and did it successfully. Naturally, every-one else followed his trend, because after all, he should know.

However, in those days, if you were a freeflighter, you were awfully concious of what was called torque effect. If a model started into a left turn under power, it seldom recovered. This torque was believed to be a strong force. Note that the Bipe was flown CLOCKWISE. If you needed to keep the model tight against the end of the lines, it seemed obvious to let torque help you do it. Thinking further, it seemed absurd to design the model so that it would stay out there, and then add some more yaw to compensate for the torque..." 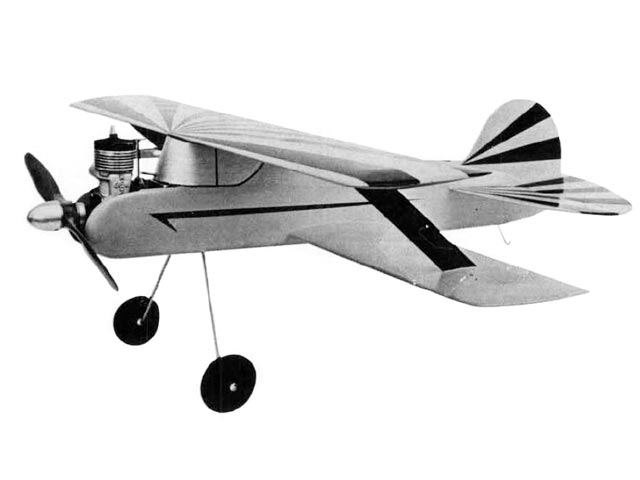