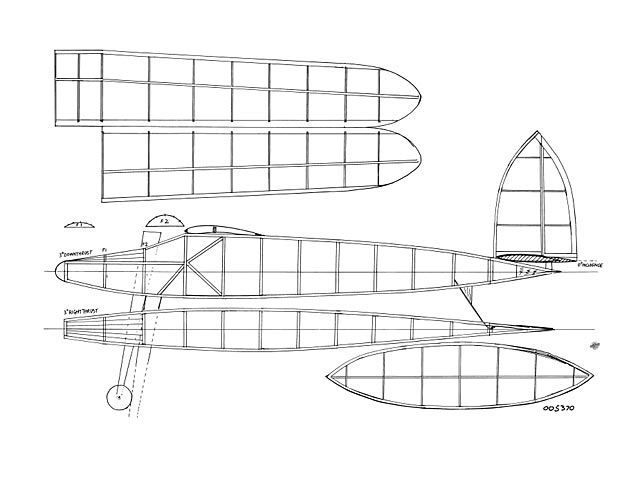 Quote: "Build This Winner of the Bendix Model Trophy. How You Can Create a Fuselage Model That Will Win Contests for You. The Construction Is Simple. By Donald Mertens.

ON AUGUST 31st, 1936, at the annual Scripps-Howard Junior Air Races, held at Buffalo, New York, this trim model flew for 20 minutes and 15 seconds, topping all flights of the day before going out of sight.

Several days later the model was found about 20 miles from the airport at which the contest was held. A few minor repairs were made on the ship and since then it has been flying as well as ever.

First draw a set of full size drawings. Now for the actual construction of the model. The instructions are very brief due to the fact that the plans are almost self-explanatory.

Fuselage. Start by making the two sides of 1/8 x 1/8 in balsa, with the 1/8 x 1/4 heavy braces where shown on the plans. The tail plug is made with the rest of the fuselage and cut off, to a separate piece later. Be sure to put two uprights here.

Now join the two sides starting at the tail. Put the bulkheads and stringers in place on the nose. Bend the wire landing gear part B and bind and cement to the correct cross brace. Cut the tail plug loose now and put the rear hook onto it. Also carve the nose plug. Sand the fuselage lightly and cover, then give it two coats of clear dope. Now put on the hooks that hold the plugs in place.

Tail Surfaces. Cut the ribs from 1/20 in stock, and assemble as shown on the plans. The outlines are cut from 1/8 stock and 1/16 stock. Sand and cover the tail surfaces, have the grain running parallel to the ribs. Now assemble the rudder onto the elevator and when dry cement onto the tail plug. Be sure that the elevator is set with no degrees incidence.

Landing Gear. Cut the two struts to the size shown on the plans, from 3/32 stock. Next bend the wire parts. Cement and bind the axles and parts A, C and D onto the struts. While drying, make the wheels from two sheets of 1/16 laminated and put the bearings on them. Fasten the wheels to the axles. Now hook hook A into the loops on the ends of part B, which are on the fuselage, and slide the rubber bands over the fuselage and yoke as shown. To remove the landing gear slide the rubbers forward off the yoke and unhook hooks A from part B.

This landing gear was designed by the Indianapolis fellows, and is the most efficient landing gear I have found. It makes the model practically crash proof. Give four coats of clear dope.

Wing. Cut out the correct number of ribs from 1/16 stock. Pin the leading edge, trailing edge and the spar in place on the plans, and cement the ribs on them in their proper places. Be sure to notch the trailing edge where the ribs join it; this adds much to the strength of the wing. Crack the spar and put the dihedral in the wing. Brace the spar where cracked with music wire or 1/32 sheet on each side of the spar. Sand the wing and cover it. Give it two coats of clear dope.

Propeller. We now come to the most important part of the plane, at least to my mind, the prop. Carve the prop very careful-ly from a block of the size shown on the plans. Carve it down to about 3/16 in and then sand it down to about 1/16 in, using finer grades of sandpaper till you reach No. ten zero. Now give it ten coats of dope, sanding lightly between each coat and polish with the back of the sandpaper after the last coat. Assemble onto the prop shaft and nose plug and assemble the free-wheeling unit. You may use any type of free-wheeling, just so that it is reliable. Make up a motor of sixteen strands of 1/8 by 1/30 brown rubber 21 inches long and put in the plane.

Mount the wing onto the fuselage and the landing gear onto the fuselage. We are now ready to test fly it. Balance the model by holding the wing tins and slide the fuselage so that the model is slightly nose heavy. Now test the model the same as any other model. When the model is finely adjusted, you can wind it to full power and get ready for a good long chase. By careful winding you can get 750 winds in this motor, I have had 850 winds in mine but do not advise a beginner to try to get this many. With the 850 winds the prop run was 97 seconds, during which the model had an exceptionally steep climb." 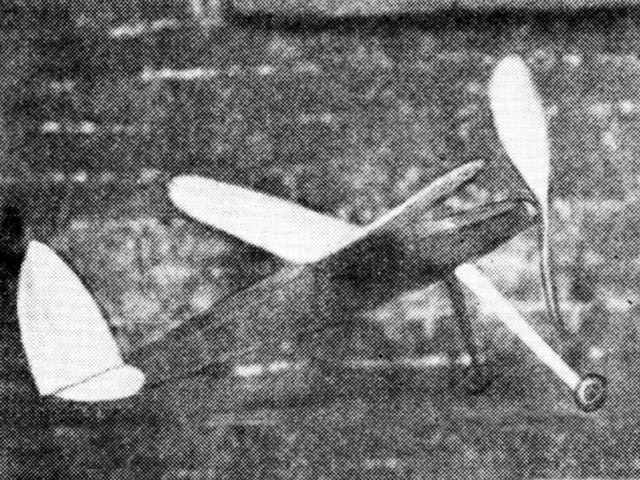