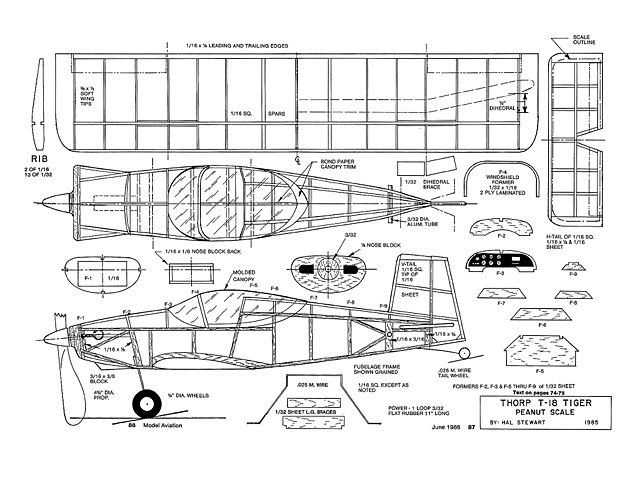 Quote: "This low-wing Peanut Scale model has generous tip dihedral as per the prototype, so it flight-trims rather easily. it has a nice appearance and flight performance to match. Thorp T-18 Tiger, by Hal Stewart.

THE FULL-SIZE version of this aircraft is considered to be a flying hot rod by home-built aircraft pilots. It was designed by John Thorp as a two-place low-wing monoplane of all-metal construction that could easily be built by one man equipped with a pop-rivet fastener gun and ordinary tools such as wrenches, tin snips, and screwdrivers. Several have been built in basement work-shops and family garages.

The 1965 edition of Air Progress Home-built Aircraft Annual provides documentation photos of the Thorp T.18 Tiger and a fascinating pilot's account of flying various home-built versions - from the standard 125-hp model to the 180-hp Super Tiger. A small airplane of 20-ft, 10-in span, this sharp-looking but simple tail-dragger features tip dihedral without sacrificing responsive aileron control. Climbing out at 110 mph and with a max speed of 200 mph, this little hot rod cruises at 115.

I picked the Thorp T-18 for a Peanut Scale model because it was a simple and nice-looking low-winger of good proportions for the purpose, especially the tip dihedral. Besides. I had never seen it modeled before. The model is patterned after the aircraft built by Earl Love of Pacoima, CA, which bore FAA Certificate N299V.

While this is not actually a beginner's model, anyone who has built a few before is not likely to have any problems. Construction is straightforward. It's a good idea to start by accumulating the materials, tracing off all the ribs and formers, and cutting them out. Make a template for the wing rib to ensure consistency. Place the plan on your building board and tape wax paper over it before beginning.

Wing: Build it as a complete unit. Start by pinning down the 1/16 x 1/4 trailing edge (TE). Use the ribs to locate the 1/16 sq lower spar, and pin it down. Glue the ribs in place, making sure the two 1/16 sheet ribs are properly located. Cut the leading edge (LE) as three separate pieces; use the dihedral view of the wing to get the joint shape correct.

Glue the LE to the ribs. After this is dry, notch the TE and lower spar, block up the tip ribs to the appropriate height, and glue the TE, lower spar, and LE joints. At this point you can add 1/16 in shims under the trailing edge of the tip ribs to give washout to delay tip stalling if you're an old hand at flying Peanuts, handle this as best suits your own flying technique.

Add the 1/16 sq top spar. When dry, add the 1/32 sheet dihedral braces, clamping them for a good joint with the spars. Make the wing tips..." 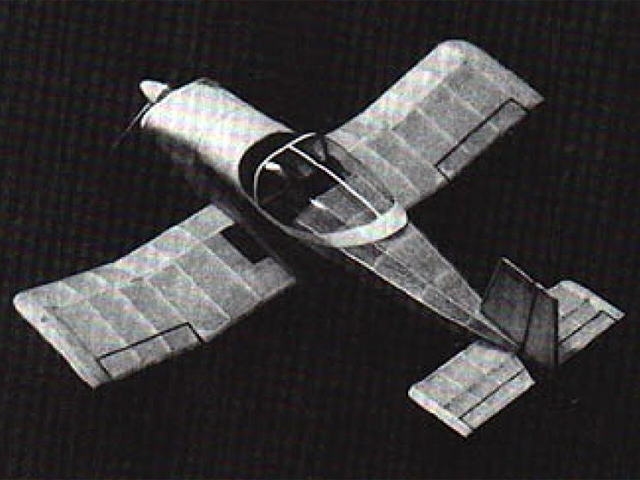