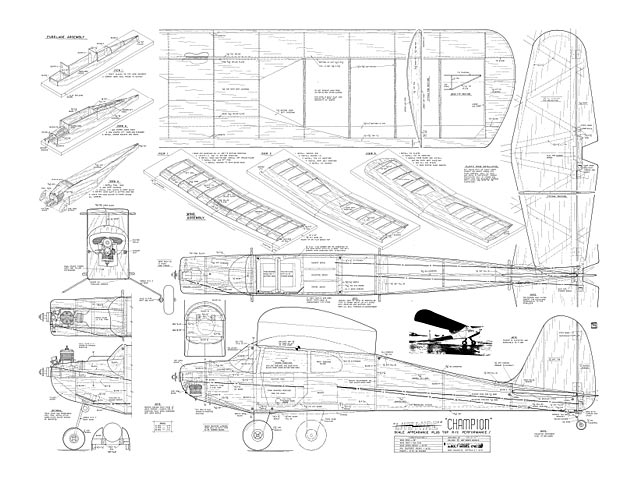 Quote: "The popular 'Champion' is patterned after the Aeronca Champion, ever popular among America's pilots! You get the scale appearance plus the famous Live Wire design features that give fine wind penetration, extreme stability, excessive ruggedness and wonderful maneuverability! The removeable R/C unit holds all R/C equipment for rudder only or elevator and engine controls too! Construction is simple and straightforward for ease of assembly making an extremely rugged model that will give many fine flights."

The original Live Wire Champion first appeared in 1954, this here is a later revision of the plan, marked as "Revised 1967, DMECO Models".

Note: due to the way it has been scanned, this plan has some 'wavy' distortion to it. Caution is advised. For a better and clearer plan to actually build a model from, see the later (circa 1979) Live Champion Wire MkIII (oz413). If anyone can submit a better plan of the Live Wire Champion MkII (or indeed can work on this file, and produce a less distorted plan) to go here on this page, that would be great.

Note: The model pic [003] shown on this page is actually of the earlier prototype, and it shows tailplane mounted underneath the fuse. This seems wrong, but the fact remains this is the image that DMECO used when marketing the MkII version (the same photo also appears printed on the paper plan, too). 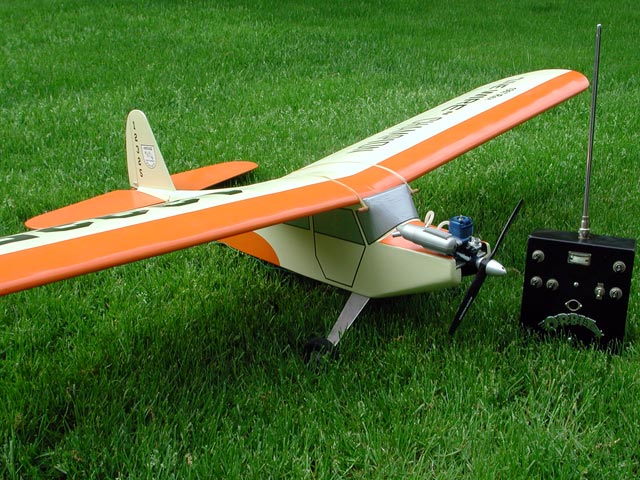 Hi Steve, Attached are a few photos of my Live Wire Champion Mk II [main pic, 005, 006]. The plane was originally built from the first Champ kit which had an airfoil stab on top of the fuselage. When Hal released the Mk II, I updated my Champ to a flat stab and built the MK II wing that had more ribs than Mk I. The stab/fin are rubber banded and when I recovered the plane several years ago I could see where I added balsa to the fuselage tail due to the change from airfoil stab to "slab" stab.
I fly the plane using the Orbit 10 channel reed Tx which has been converted to operate normal servos on 2.4 GHz. I do this so I can demonstrate how we had to "beep" the Tx lever switches to obtain smooth flying in the reed days. The plane is finished in silk and brushed dope.
BTW, I was a very good friend of Hal deBolt and now fly his Live Wire planes at Vintage RC Society (VRCS) gatherings.
Bob Noll - 11/02/2021
Add a comment