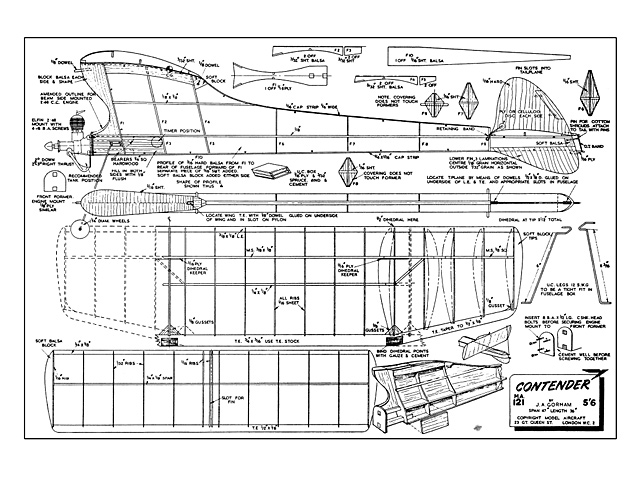 Quote: "CONTENDER was first flown in the 1949 season with very moderate success, but it was decided to continue with the layout for 1950 as it obviously had possibilities. Unlike some of the writer's other designs, Contender did not begin on the drawing board - it just 'growed,' and was influenced to some degree by contemporary designs at the time - notably Marcus's Firecracker(oz2265). Altogether the writer has built ten or twelve Contenders and the number built by the Ipswich club amounts to well over twenty. Up to the time of writing, however, the design has not been allowed to go further. Although conceived nearly two years ago, it is still quite capable of winning a national contest and in fact did so last year. From the international standpoint it does not fly well loaded up to 17-3/4 oz; its best flying weight is about 14-1/2 oz (still FAI loading) and it is for this figure that intending builders should aim.

With an average-power 2.49 engine Contender is fairly docile and the ability to fly stably in high winds is its outstanding feature. In fact as a rough weather contest machine it is hard to beat. However, with a high-powered 2.49 motor it does become a little tricky, and some of the ten machines mentioned have been accounted for by spinning in. Details of an experimental auto-rudder which has been tried out with this design are given. Although producing a slightly higher performance the device was removed as it appeared likely to affect reliability, which is regarded by the writer to be all-important for successful contest flying. CG position will vary with power, for if power is increased, then to main-tain a straight trim the CG will have to be moved aft. It is suggested that the model be tried with straight trim and short engine runs over long grass, moving the CG aft (with consequent positive adjustments to tailplane to maintain glide trim) until the model just does not loop. It is important not to have the CG further back than this point, and also to note carefully whether indications of insufficient fin area show up if extreme power is used. If this occurs (weaving climb) add a few sq in of fin area.

Building is fairly straightforward, the fuselage being of the usual X construction with the added refinement of capping strips - these were added after noticing that X-type fuselages only broke through the backbone buckling. These capping strips considerably strengthen the backbone where strength so needed - on the edges. If a bearer-type engine is used, make sure the bearers are at the correct spacing, as those on the plan are designed purely to add strength to the ply former on which the engine is bolted. A KK 10 x 8 plastic prop is used by the writer, with the tips chopped of to bring it to about 9-1/4 in diameter. The best place for the cutout is as near the throttle as possible, preferably mounted directly onto it. The best tank position is below carburettor level and as far forward as possible.

Wing and tail construction is normal and should present no difficulty to the average builder. Cover wings and tail with lightweight Modelspan; give two coats of full-strength dope and one of fuel proofer.

At this point the writer would stress again that Contender is intended to climb straight or only slightly right or left. In a high wind this results in the model continuing to plough its way up while others are looping and spinning. Readers might also note that with the undercarriage box idea the possibility of using various types of undercarriage is opened up.

Interest in power duration contest flying has grown considerably during the past season, and no doubt there will be very keen competition amongst power fans for the top placings in the 1952 events. However, successful power contest designs very seldom fly 'straight off the drawing board,' but only win after many months of development and contest flying experience. Contender is a result of this kind of development work, and has been thoroughly tested under all conditions. Power contest enthtisiasts who want to avoid having to start a design from scratch will find that if well constructed and carefully trimmed, Contender will prove to be a potential winner in any contest. " 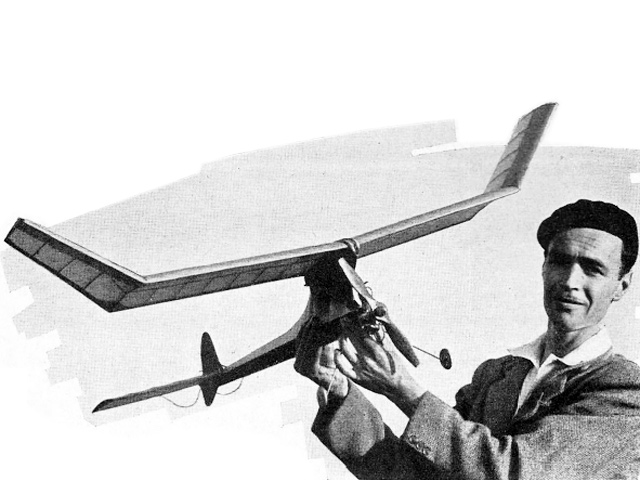