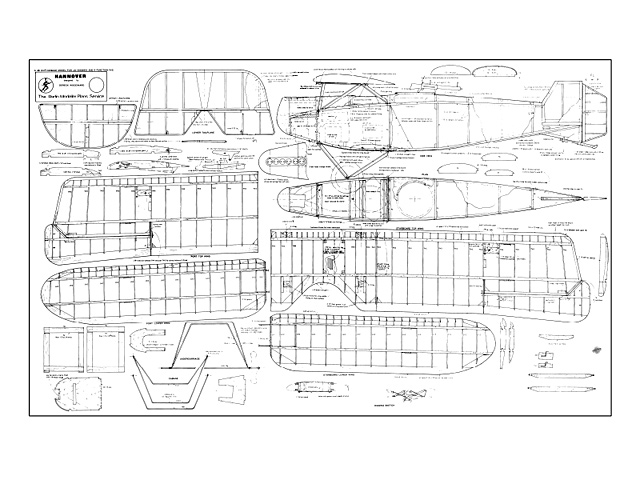 THE HANNOVER CL111A was designed in 1916 as a two seat escort fighter. Spanning a compact 38ft, the aircraft featured a biplane tail, to give the gunner a better field of fire. It proved to be a rugged, agile machine which was very efficient in the hands of a good crew.

Despite the unmistakable appearance, construction is as easy as any other small biplane. Removal of the top wing and the whole of the top decking gives access to a combined radio and tank bay which gives far more room than the usual method of trying to fit the gear through a tiny lower wing aperture.

Interested? Well, let us start cutting balsa and build something that will confound all those who think all bipes areTiger Moths.

The wings: I usually start here, after you have cut out all those ribs, the rest is easy. Most of the top ribs can be made from the one full template and trimmed to the correct size as building progresses, I find this the easiest way to get a good fit.

Build up the top wing panels and centre section apart from the dihedral braces and top spars. Join at the correct dihedral angle then notch the relevant ribs and add the braces and top spars. This avoids bending the braces around that slight sweep angle. Add aileron drive, the ply sheeting, which doubles as a dummy oil tank and the top of the servo bay, and the servo mounting. When complete, build the hatch for the underside of the servo bay. The aileron servo rests in the bay on strips of wing seat tape, the hatch is similarly lined with tape and screwed to the underside of the wing.

Build the ailerons separately, it helps to steam the washout into the trailing edge strips prior to assembly. Leave the root rib and aileron horn until the main structure is complete, then add these off the board. Add the hinges and check the ailerons operation, including servo, for full and free movement.

The lower wings are very basic, but it is easier to rig the dihedral into the wire dowels after the fuselage is complete, so fit the dowels at this stage but do not fix yet.

The riblets on both wings probably add to the efficiency of the wings as well as their appearance, so please don't omit them. The result is well worth the effort. All that remains is to fit the strut hooks and all the gussets shown on the plan.

Tail group: I can hear them from here, the cries that this guy builds backwards! Perhaps, but it helps to use the tail to align the fuselage. Nothing too difficult here, the structures reflect the original, and with two tailplanes weight watching is doubly important so please keep it light. I even used lightweight tissue on the open areas. The wire joiners are best bent to actual model length after the tail is assembled.

At last, the fuselage! Start with the sides, which are just a normal sheet covered framework. While they are setting, cut out the formers and the ply motor mount to suit your motor. This is a good time to fit the blind nuts for the engine bolts. Before you ask, yes it does need all that side and down thrust.

Fit the sides to F2 and F4, add the motor mount and F1 . Chamfer the rear ends of the sides and draw in to the fin, using the lower tailplane to check alignment. Add the cross-braces, turtledeck formers and sheeting. All block areas and the 1/8 ply ring around the gunner's cockpit can be added, then carve the topside to shape. At this stage I find it handy to start fitting the servo mounts, tank installation and the silencer/motor throttle odds and ends. On the prototype model a 4oz tank was fitted in the bottom of the tank area with its bottom level with the lower edge of F2..." 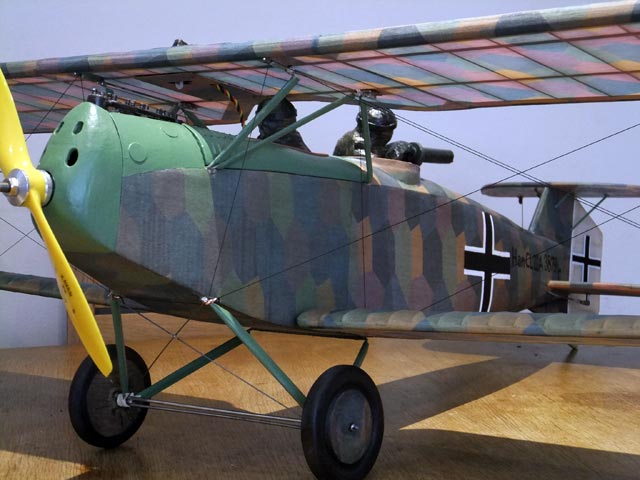 Please find attached jpegs of my Hannoverana [main pic, 008-010], built from the Dereck Woodward plan (oz10694).
Gino - 17/02/2021
What a beautiful model! I especially like the hex-pattern, the subdued colouring, the simulated engine. Two notes only: 1) It absolutely needs a scale propeller!, b) the II Reich national flag was black-white-red, not black-yellow-red as your aileron cable shows. Those were the colours of the Weimar Republic (and current too), sir, so please get a correct cable! :-)
Miguel - 17/02/2021
Beautiful model, Gino! The finish is spot-on! As for Miguel's fertile imagination, your "aileron cable" colors (servo cable) are just fine as well...think of it as a transitional aircraft, from Imperial rule into the Weimar Republic period...besides, I believe the aileron control cables came into the fuselage at the nose of the aircraft. Maybe Miguel's referring to an upper plane radiator hose? All things being said, Gino...your Hannover is a very nice piece of "work," and the contrasting snow likewise is a very nice touch.
Neal Green - 17/02/2021
Very good, the model that is in the snow has an electric motor or glow? Greetings from Argentina,
Gustavo - 24/02/2021
Add a comment