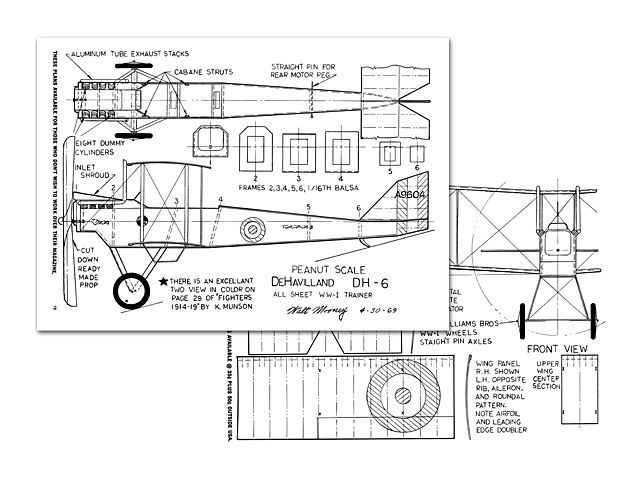 More than 2000 DH-6 primary trainers were built during 1917 and 1918 but because they were neither fighter or bomber they are relatively little known to the present day modeler. While some airplanes appeal to the modeler because of their sleek graceful lines, such as the Spitfire, the DH-6 appeals to the Ole Prof because it's such a straight lined aircraft. When he read accounts that said it was easy - even too easy - to fly and unbelievably safe; he decided it would make a nice, rubber power, scale bird. The wing had a lot of under camber in the airfoil which resulted in a soubriquet of, 'Clutching Hands' for the design. This feature decided the Ole Prof to make an all sheet balsa, Peanut Scale model of the DH-6.

Although the drawings show several thicknesses of wood in the model, if you don't mind laminating the thicker pieces, two sheets of one thirty-second thick sheet balsa will provide enough wood to make the entire model with quite a bit of wood to spare.

Wings and tail surfaces are made to the size shown on the plans. Cement leading edge doubler on the wing panels and when dry sand the leading and trailing edges of all surfaces to a round shape.

The fuselage is essentially a long tapered, rectangular cross-section box, except at the front. Here the top is made of three pieces instead of a single flat cross sheet. In the cockpit area below the wing there is no upper cover. The original DH-6 aircraft had no cowl around the engine at all, so the model front end has been simplified a little making it a box shape. The aircooled V-8 engine is simulated on the slanted panels of the nose with four exposed cylinders on each side and a bent aluminum tube exhaust stack. The Center of Gravity balance point of model is indicated on the side view and may seem pretty far forward, however, with the small horizontal tail used, this CG position is necessary. On the model in the photographs the engine cylinders are short lengths of 3/16 diameter bolts used as ballast as well as detail.

After the fuselage is assembled give all the separate parts one very light coat of thinned dope or sanding sealer. The Ole Prof used a spray can of Magic Brand Lacquer Sanding Sealer; available in Southern California from the Standard Brands paint stores. The idea is to seal the balsa pores very tightly so that the felt pen ink, used in decorating the model, won't run when you apply it. Care must be taken not to warp the wood with too much sealer. One very light coat is sufficient. When the sealer is dry, very lightly sand all the surfaces to remove the roughness raised on the balsa. Felt pens can now be used to put on all the decorative detail you want.

The model in the photographs was decorated as a trainer in the English service. The roundels on the upper surface of the top wing and the lower surface of the bottom wing at the tips, have red centers and blue outside circles. The same roundels are on the fuselage just behind the cockpit. White felt pens aren't readily available so the white intermediate circle is left balsa colored. The vertical tail has a blue forward stripe and a red aft stripe. Use a fine dark brown or black felt pen to lightly indicate the ribs on the top and bottom of all flying surfaces. Use a fine black pen to put the serial number on both sides of the vertical tail. Use a grey or black felt pen to color the entire front end of the fuselage to a point about 1/4 inch aft of station four. Now use a brown felt pen to color the top of the wings, top of the fuselage, sides of the fuselage, both sides of the vertical tail. Be careful not to overlap your roundels because you can't erase felt pen from balsa..." 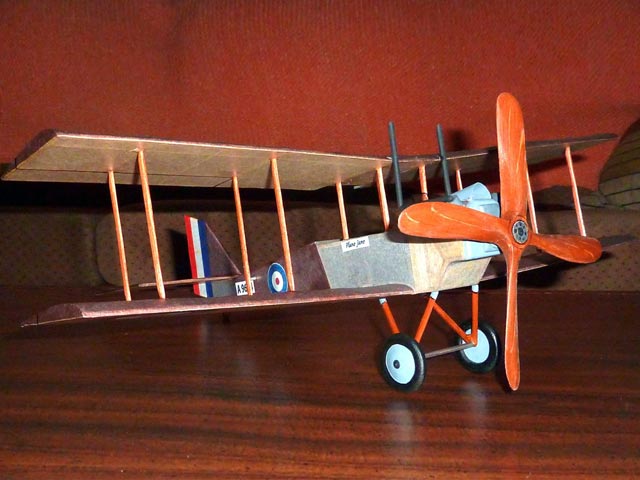 I’ve got another old favorite for you… the DeHavilland DH-6 [main pic, 006-011]. When Walt Mooney’s little peanut model made it into print years ago, it was an awakening for many modelers. The DH-6 is such a simple design, no curves, nothing complicated, just basic construction, and yet it is so elegant, so successful at its endeavors… just like DeHavilland's original bird. I was inspired to create a much larger radio controlled version, which was equal to the design, a joy to build and fly. That was fifty years ago. I’ve always wanted to construct another 'Clutching Hand.'
So here, based upon Mooney’s no-frills design, is an enlarged 18” wingspan version… this time it’s rubber-powered with a carved four-bladed propeller, just like the original… and a forest of wing struts. I’ve named her 'Plane Jane,' because that’s probably what many of those trainees thought of her… but her real name should have been 'Faithful Jane' or 'Guardian Angel Jane.' She’s a sweetheart.
Another face for another Outerzone plan, DeHavilland DH-6 (oz10693). Thank you again, Steve and Mary.
Neal Green - 17/08/2020
Add a comment