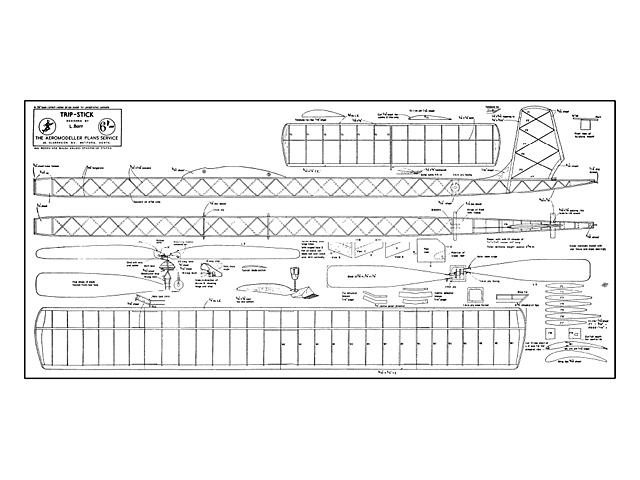 THIS MODEL WAS originally drawn and built within the short space of three evenings during late 1959, for an SMAE open rubber event. Time was at a premium, and Laurie drew upon ideas and experience used on rubber models, designed in 1949! Although the model flew well right from the start, there was not sufficient time to trim it properly, and no great score was returned at that time.

Thereafter some trouble was taken in obtaining perfect trim, and subsequently another identical model was made. Laurie followed this with the present Trip Stick, which differs only in the total weight (reduced by one oz. by careful selection of wood) and changing the type of prop. The latter change made a very significant difference to the climb, the improvement being clearly seen as a gain in height of some 40 percent over that of its predecessors.

Models one and two, had a long string of near misses, after being in fly-offs in every open event entered, placing third in all comps. that paid out to second place, and was once fourth in a comp. that paid out to third place?! Eventually, Trip Stick was persuaded that the idea was to win, and nearly did so in the open rubber at the Nats in 1961, being only a few seconds behind the fly-off winner at some 9.00 mins odd! and followed this by winning the Fairey Cup at the Northern Heights gala at Halton. At this point in the history, Laurie started using the present model, and it was used by the Hayes club in their hard fought battle for the London Area Challenge Trophy, finishing the season by coming second in the Bill White memorial cup at Chobham in perfect weather, having reached the fly-off, and producing nearly five minutes for second place.

The model is drawn exactly as used and is fully developed. If correctly built, it can be relied on not only to return high times, but is very consistent and can be used in all weathers. In thermal conditions, getting it down can be quite a problem, as normally it will be high enough to make recognition difficult, and careful adjustment of the tailplane dethermalising angle is well worthwhile.

In construction, the important thing to note is the proper selection of wood, and if you see a piece of wood in the shop with thumb nail marks in it, do not use, as Laurie has probably tested it and discarded it before you! Anyone who has built a few models before (preferably rubber type) will have no difficulty in producing a sound model.

It is essential at all stages of the construction to ensure that all the parts are built true without warps (apart from the slight washout on both wing tips). It is no good hoping that the covering will rectify wings and tail that are built twisted. Similarly, the washout at the wing tips must be built in..." 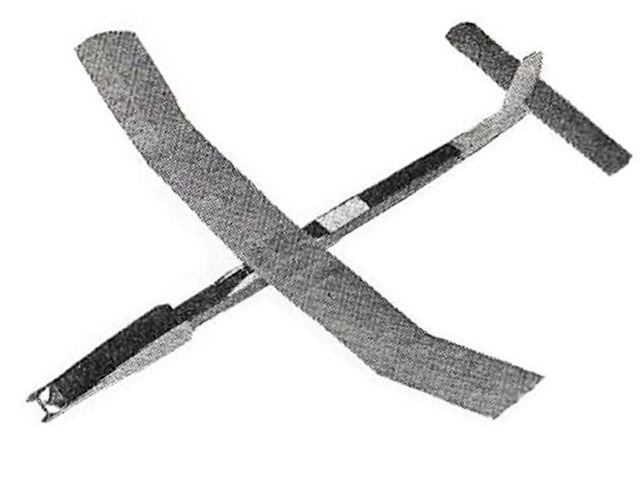