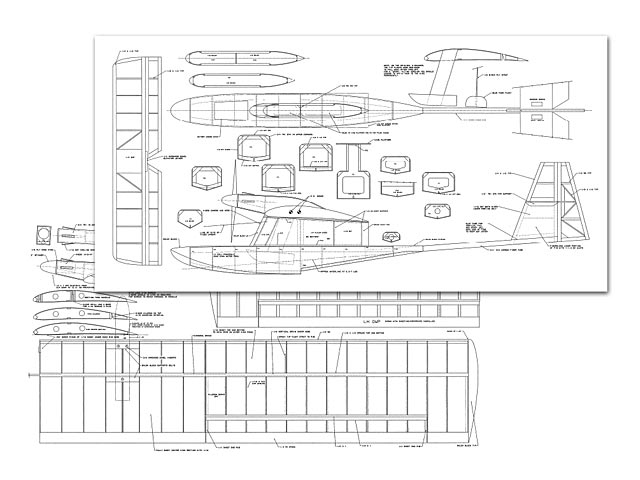 Quote: "On a cool, clear summer morning in July 2001, a group of modelers from the Silent Electric Flyers of Long Island (SEFLI) chased an electric-powered, radio-controlled seaplane across New York's Long Island Sound. This was the first crossing of the sound by an electric-powered model. The idea for this project came about when a sister electric-flight club on the West Coast proposed flying an electric model across the United States. That proposed flight, though not planned as a nonstop journey, faced tremendous technical and physical hurdles. I proposed that SEFLI do a 'small step' project to gain some experience with this type of endeavor. I had always wanted to fly an electric aircraft across Long Island Sound, and this seemed like a good opportunity to make such a flight and investigate long-range electric flight.

The Task. SEFLI decided to not make it too easy on us. We chose a trip from Port Jefferson Harbor on the north shore of Long Island to a point just west of Bridgeport Harbor in Connecticut, a distance of about 14 miles.

From the outset, we decided that our aircraft would be a seaplane. This alleviated some problems, but caused others. For example, it takes more energy to lift off from the water, though a good hull design can minimize this. Also, seaplanes typically have higher drag coefficients than other configurations, thus cutting the range of the model. On the plus side, the ability to take off from anywhere along the shore or land anywhere along the route reduced logistical problems due to weather and the abilities of the chase boat.

Early in 2001, the steering committee of SEFLI formed a team to begin sketching and analyzing various configurations. The technical team consisted of both active and retired aerospace engineers (many of whom worked at Grumman Aerospace, a company that has made many fine amphibian aircraft). Frank Dellamura was charged with preliminary design. Henry Prew and Nick Dannenhoffer did aerodynamic analysis. I was in charge of model design, propulsion, and system integration. Mario DiDiego handled on-board video instrumentation. Frank Bock designed, developed, and tested a downlink watt-meter (DLWM) for use during flight testing (see sidebar).

Shaping the Model. We investigated a number of different seaplane configurations. Pontoon types were eliminated early due to their high drag. A hull-type plane made the most sense, so single and dual-hull flying boats were studied, as well as high, low and gull-wing configurations. When all the data were in, a single-hull, high-wing model with either a single or twin-motor configuration seemed best.

But how big would the model have to be? That depended on two main variables: how much it would weigh, and how fast it would fly.

How fast the plane would fly depended in part on how fast the chase boat could go. SERA member Bob Erbe owns a 15-ft Boston Whaler capable of cruising comfortably on calm seas at 20 to 25 mph with three people (the boat skipper, the model pilot, and the communications officer) on board. With that as the model's base speed, we now knew how long we had to fly: about 45 minutes at 20 mph, or 40 minutes at 25 mph, to make the crossing in calm winds. Flying a model with continuous power (and no gliding or thermal assist) for that long is possible with new motor and battery technologies, but we had to design a model that would cruise very efficiently!

Brushless motors and nickel-metal-hydride (NiMH) battery technology would give us our best chance at making a 45-minute flight at 20-plus mph. Using ElectriCalc, I ran scenarios to determine basic performance while vary-ing inputs such as cell count, props, and motor types. Typically, a powered model cruises most efficiently at somewhere near twice its stall speed. Assuming a cruise speed of 20 mph and a stall near 10 mph, and using some practical experience in sizing models, the ElectriCalc exercises produced an aircraft with 10 sq ft of wing area. The airplane would have a total weight of about 6 lb. Using a single direct-drive Aveox 1415/4y motor and a dozen 3000-mAh NiMH cells produced enough power at takeoff to climb briskly and cruise at a low enough current to make a 40 to 50 minute flight. Henry Frew used basic aerodynamic per-formance equations to confirm the computer calculations.

In March 2001, we froze the design. Airframe construction began one month later. The final design was a single-engine seaplane with a wingspan of 100 in, a wing area of 1,500 sq in, and a target weight between 5 and 6 lb..." 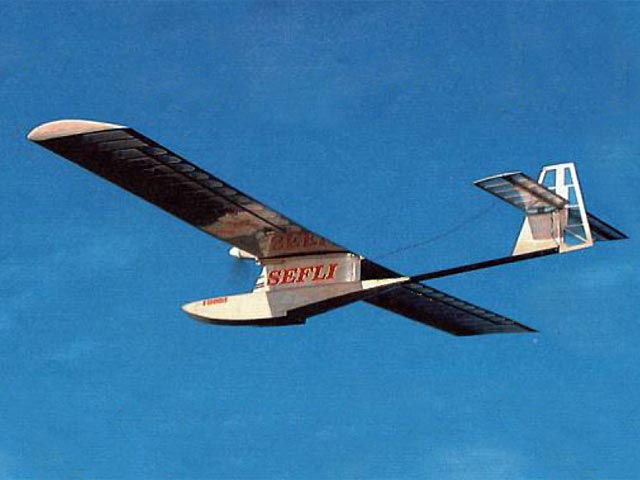