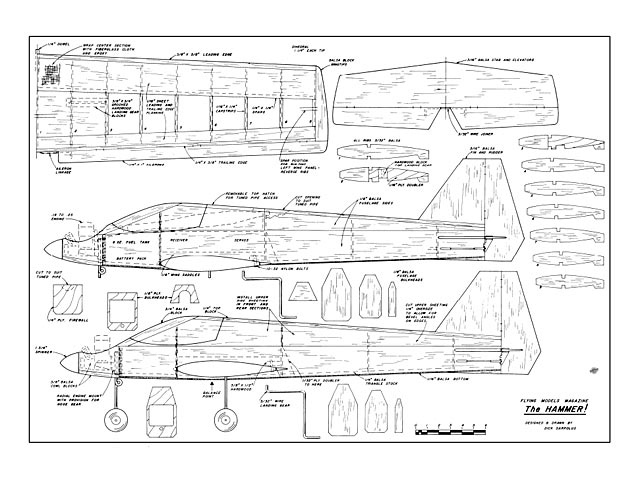 Quote: "Building your pattern skills? You'll need a Hammer. Nail down the basics with this .19-.25 size pattern bird. Build it with internal or external pipe. Hammer, By Dick Sarpolus.

Nineteen to .25 powered aircraft have been popular for the obvious reasons of low cost and smaller size, as compared to .40 and .60 models. The engines cost less, they burn less fuel, and the aircraft are smaller and easier to transport. A .19-.25 aircraft can accommodate today's standard size radio equipment; ultra small R/C gear is not needed. The .19-.25 size ship can be flown in almost any weather conditions. In R/C pattern competition where a .60 is the maximum engine size allowed, the competitive edge will always be with the larger, more powerful aircraft. But the smaller models do serve very well for sport, practice, or local club activities.

Probably due largely to the competitive demands of 3.5 cc (.21) R/C car and boat racing, there are many good, powerful, schneurle ported R/C engines in this size range on the market today. Like the .60 engines, tuned pipes and their header adapters are available in the smaller size also. Mac's Products has adapters and pipes to fit most of the .19-.25 schneurle engines, and some of the engine manufacturers offer their own pipe set-ups.

I designed and built the Hammer in order to try some pattern flying with a smaller aircraft, and to see just what the new, hot engines would do in a pattern aircraft with a tuned pipe. This aircraft resembles today's typical .60 powered pattern ships in a smaller size. Fixed gear was used as I felt any retract set-up would add too much weight.

Two versions of the Hammer are shown on the plans; my first version accommodates an upright engine with external tuned pipe or mufflef beside the fuselage; or, the engine could be side mounted with the pipe running beneath the wing. For a rear exhaust engine, another fuselage variation was laid out. Mac's Products offers a raised pipe adapter just for this sort of installation. The top of the fuselage was made removable to facilitate installation of the pipe; to provide interior room for the radio gear, the wing position was lowered to the bottom of the fuselage. The design was thus compromised to mount the pipe internally and it worked out quite well.

The aircraft has a 50 inch wingspan, 420 square inches of wing area, tapered wing planform and a 15% full symmetrical airfoil. The fuselage is 41.5 inches long with a gener-ous amount of forward side area. Structure is conventional and simple; the wing has two spars, planked leading and trailing edges, and capstrips. The tail surfaces are simply 3/16 sheet balsa. The fuselage is a basic box with thin plywood doublers, and angled upper fuselage side pieces with a rounded top block. The upper fuselage sides could have a more rounded appearance if the bulkheads were cut with curved rather than straight sections; take your choice. I framed up the prototype in less than a week's work, and a foam wing core would make it even easier.

The tuned pipe is good for at least 1000 to 1500 additional RPM on most schneurle engines, and is not a problem to install and tune. As an example, I'll go quickly through the steps taken to establish the tuned pipe length for a .21 engine used on one of the prototype Hammers. When discussing the length of a tuned pipe set-up, the measurement given is the distance from the center of the cylinder to the initial largest diameter of the tuned pipe, measured along the centerline of the pipe and its adapter. This length varies with the engine, prop, fuel used, etc, but with the broad tuned pipes used for pattern flying it's not nearly as critical as the specific RPM pipes used for racing events.

We set up an engine in a test stand, decided on an 8-6 prop as appropriate for this model, and ran the engine with 10% nitro fuel. With no muffler or pipe, just the open exhaust, it tached 13,500 RPM. The first pipe installation had a length of about 15 inches, measured as described. The RPM indicated was 13,500, and while it was quieter, we had no increase in power. The adapter was shortened several times, and at a length of 13.5 inches, the engine was turning 15,200 RPM. We switched to a different pipe, a non-muffled tuned pipe, and the engine turned less than 15,000 RPM. When this pipe set-up was shortened to 12.5 inches, the RPM went up to 15,200 again.

Shorter lengths tried with both pipes resulted in lower RPM's. Obviously, the correct length also varies between different styles of the pipes. It's better to have too long a pipe than too short; if too long the gain won't be as great, but if too short the engine can go excessively lean, a potentially damaging condition. So after an hour or so of bench running we had arrived at the correct pipe length for use of two different pipes with this particular engine, and had gotten 1700 additional RPM, along with a lower noise level. For optimum aircraft performance, different size and style props could also be tried. If all this seems like too much trouble, use an engine with its stock muffler and relax.

Flight testing of both Hammer design variations was rewarding. The plane has no bad habits although it's certainly not for a novice pilot; smaller planes are not automatically easier to fly. I prefer the version with the external pipe while my friend Lance Schneider, who built the enclosed pipe version, feels his flies just as well and is faster. They do all the maneuvers that we can ask them to do, and look good doing them. The rolls are particularly nice; four-points are quite easy. The plane snaps and spins easily and tightly; when the controls are neutralized, it stops spinning immediately. During the coming season it will be interesting to see how the Hammer makes out in our club's pattern competition flying against larger aircraft. One thing that is welcome is the burning of less fuel; and the planes are easier to get in the car and carry around. I plan to do a lot of flying with my Hammer.

Now to get into the construction of this model. The usual first instruction for scratch building applies; cut out all the parts first and make your own kit. This will speed up your work as you won't have to stop and cut out parts as you build. This is also the procedure that stops many modelers from building from magazine plans. If you haven't scratch built before, start now. There are so many good designs presented in the magazines..." 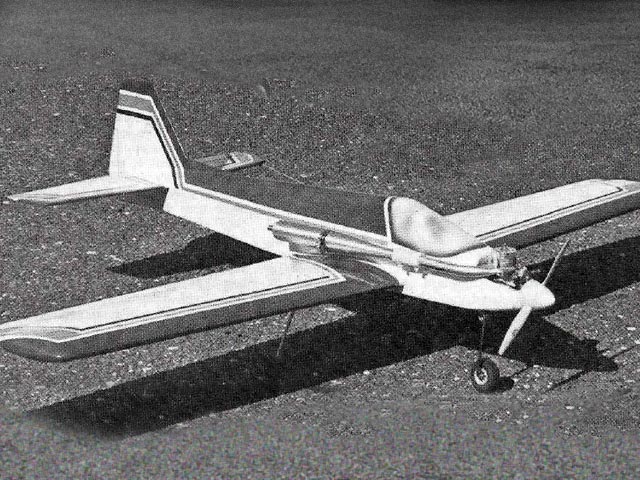