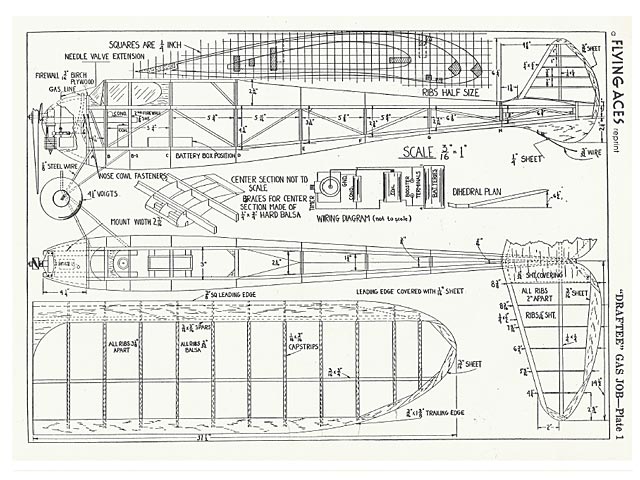 Quote: "THE 'DRAFTEE' is designed for the fellow who likes a good-looking ship that will give a good account of itself in competition with 'Freaks' built for high time and super-super stability. During the time I had it in my possession (two models of the same design flew out of sight after mare than 90 flights each) no trouble of any kind was experienced. We did, however, have to limit the motor run as the Draftee was always chasing after those nice big cumulus clouds. On a 12-second motor run it consistently did over two and half minutes flight time. A sister ship took first place for beauty and design at the 1940 New York World's Fair. It has also won first prize for the highest flight time on two flights, the second flight time being 7 minutes 49 seconds out of sight. The reason for this performance lies in the tight left spiral climb and flat left glide without any dip, after which she starts thumbing her way cross country. But enough said, let's get down to work and build it.

FUSELAGE AND LANDING GEAR: First thing to do is to draw up the fuselage plans full size. This can be done on ordinary brown wrapping paper. After that is done, lay out the 1/4-inch square longerons for the fuselage. It is advisable to build the two sides at the same time so that both of them will be identical. After the sides are glued and dried cut them apart and go over all the joints with plenty of glue.

Assemble in the conventional manner, so that we now have a rectangular frame. While this is drying cut out the side, top and bottom formers and the plywood firewall. The farmers are glued on, and while they are drying proceed to bend the landing gear.

There is a small amount of right thrust, enough to offset the torque.

Be very careful when wiring the ship as it is mostly the cause of all the motor trouble. Make all the wires as short as possible and all joints should be cleaned and soldered in order to get the most out of your batteries.

The next job is to put the stringers on. The stringers should be fairly hard because after the paper is doped they will have a tendency to pull in and cause ridges, but not so hard that they will cause difficulty to work with. The stringers are 1/8 by 1/4 and then extend 1/8 above the formers so that there is a smooth contour across the fuselage adding much to its streamlining and good looks.

WING AND TAIL SURFACES: It is best before starting to make the wing ribs to first make a master rib template out of heavy cardboard or wood so that you can duplicate all the ribs needed. The ribs are made out of 3/32 soft sheet. After we have all the ribs cut and sanded to uniformity, lay the main spar down on the wing plan. Then slide the ribs on and line them up, and put a drop of glue on all the ribs to hold them in place. Add the smaller spars and glue them making sure that all the ribs are in line. Next add the leading edge and the trailing edge. Do not sand the trailing edge until the cap strip is glued on.

Now put on the wing tip. Lay some carbon paper over 3/16" sheet and trace the shape, then cut it out and glue it together, and when dry glue it to the wing. This applies to one half of the wing. The other half is made exactly the same.

The center section with the center section spars is made separately and the two halves of the wing are joined to it. Each tip is raised 6-1/2 in at each tip and then glued and left to dry thoroughly. However before further..." 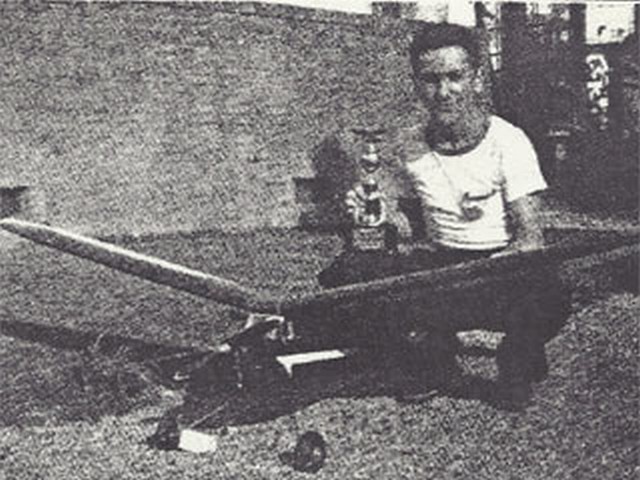