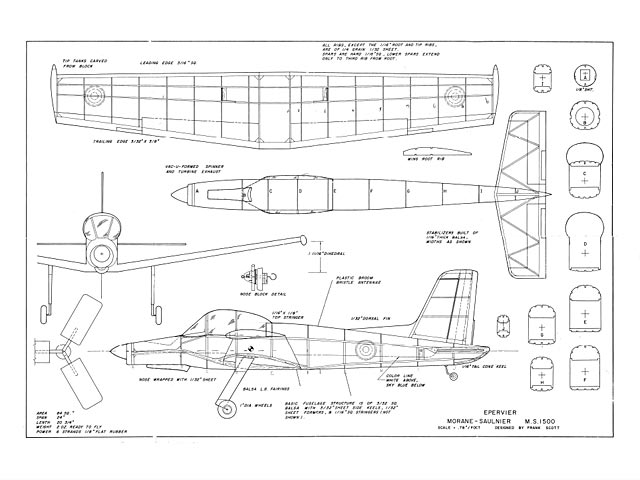 The contest was but a few weeks away and I had not yet selected a plane to build. Typically the rubber scale model has either a parasol or high wing, and indeed on the imaginary tarmac of my mind there sat a phantom Helio Stallion and Turbo-Porter, but in spite of their fine proportions such aircraft just wouldn't do. Something different was needed, but what? Certain features were essential: a long nose and tail to contain a long motor, good propeller clearance, large tail surfaces and dihedral for stability, and clean, pleasing lines.

While browsing through a copy of The Worlds Fighting Planes, 1959, by William Green, my fingers were guided to just such a plane, the Morane Saulnier MS 1500 Epervier, a two-seat multi-purpose turboprop airplane designed to a French Army requirement for an inexpensively built and easily maintained machine for use in limited conflicts in a variety of roles ranging from observation to close support. First flown in the Spring of 1959 the Sparrow Hawk was destined to never see produc-tion and the two prototypes seem to soldier on as test beds.

International politics not withstanding I hastened to build a model of the first MS 1500 (Marcadau turboprop powered) and finished it, as is my custom, the day of the contest. The proof of the pudding being the first place trophy, it won in tribute to long stable flights fol-lowing smooth rolling take-offs.

Construction is not difficult, but may be a trifle different in places. Start by pinning down the 3/16 sq leading and3/8 x 3/32 trailing edges and cement the unnotched ribs into place. When the cement is dry, mark the locations for the 1/16 sq spars on the root and tip ribs and then carefully cut the notches in each rib with a razor blade and straight edge. This will result in straighter spars than notching before assembly, note too, that only the upper spars extend to the wing tips. After blocking up each wing tip 1-11/16, the spars are cemented in place as are the gussets. The wing may then be turned over to add the lower 1/16 sq spars and 1/16 sheet landing gear mounts.

After carefully sanding the wing, the 1/32 diameter wire landing gear is securely cemented to the mount, ribs, and lower rear spar. The wing may be covered with blue Japanese tissue which is water sprayed after attaching the light scrap balsa tip tanks.

Fuselage: Begin by cutting the two nose keels and stabilizer supports from firm 3/32 sheet and build the fuselage sides from 3/32 sq in the usual manner. As these keels are very important to insure the alignment and mounting of the nose and wing, cut and cement most carefully. After separating the fuselage side start cementing in the 1/32 quarter grain sheet formers starting with C and E, continue by cementing the rear of the fuselage together and follow with nose block A, and former B securely cemented to and located by the triangular locating pieces on the keels. Now the remainder of the formers except for lower formers D and E are placed and the turtledeck stringers put into place..." 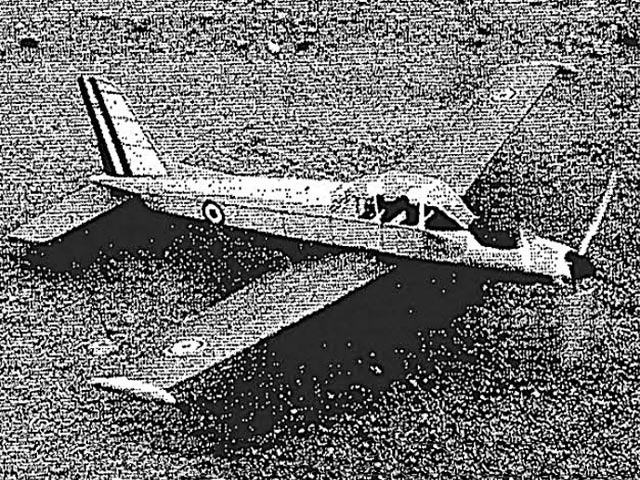