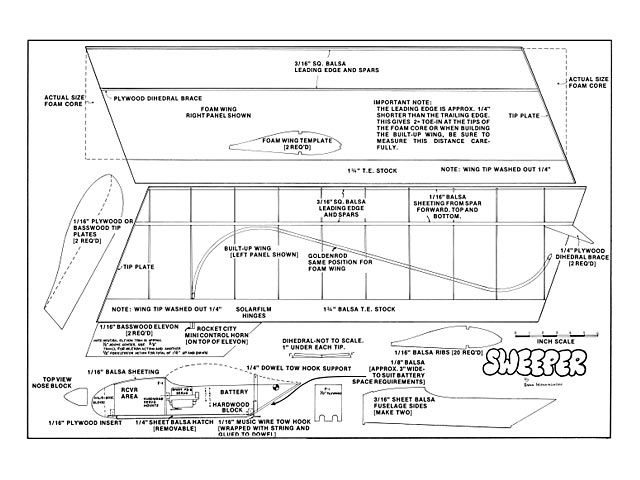 Quote: "I suppose that it is nearly every model designer's dream to one day design a full-scale man-carrying aircraft. That's how this one came about. To make a long story short, let's simply say that Sailbird Flying Machines of Colorado Springs, Colorado, in search of a higher performance hang-glider, asked me to design a rigid flying-wing type machine. Sailbird's Rogallo type hang-glider is probably the strongest, most stable, and most reasonably priced on the market today. It is extremely well-constructed but suffers the same problems as all standard Rogallos - a poor 3 or 4 to 1 glide ratio. They wanted a glider with at least a 10 to 1 glide ratio that was still stable and transportable. The only design restrictions were that it had to have a swept wing and it had to be tailless. I don't know a whole lot about the aerodynamics of such a device, but I set to work anyway.

It was decided to build it quick and dirty - that is, the easiest and fastest possible construction with only secondary consideration given to weight or durability. A value of 20 degrees sweep per panel was determined to best suit our needs as a relatively optimum trade-off between stability and controllability. Incidentally, controllability was to be one of the very great advantages the Sweeper was to have over a Rogallo - elevon control was a must. Liberal applications of old stand-bys like dihedral, washout, tip plates, a little undercamber, relatively-blunt leading edge, and a forward center of gravity helped to overcome some of the unknowns like high sweep angle, no horizontal stabilizer, and finless yaw stability. Apparently, the right mix of all these things was achieved, since the Sweeper flew beautifully with no changes since the first test flight.

If you like unusual gliders, let's get to work. The prototype used a foam wing, but you may want to use the built-up version, also shown on the plans.

Cutting the foam wing follows normal procedures, except that both ends are cut off to provide the sweep. Make sure that when you cut off the wing tips - shorten the leading edge approximately one-quarter inch so that you get 2 degrees of toe-in on the tip plates for stability. Glue the leading edge, trailing edge, and both spars in. With your grinder, rout out a groove for the Goldenrod in the bottom of the wing, until you get to the elevon area, then run it out the top of the wing. Glue the tubing in securely. Sand the dihedral break in the middle so that you will have one inch under each tip. Glue the panels together.

Cut the plywood dihedral braces, rout out a hole in the foam for them behind the spars and glue them in. With glass cloth and epoxy (resin will eat the foam) reinforce about 4 inches either side of the center. This has been the only area damaged by crashes in the prototype. Glue on the tip plates, and you're ready to cover! Use Solarfilm or other 'low heat' covering material so that the heat from your iron won't melt the foam..." 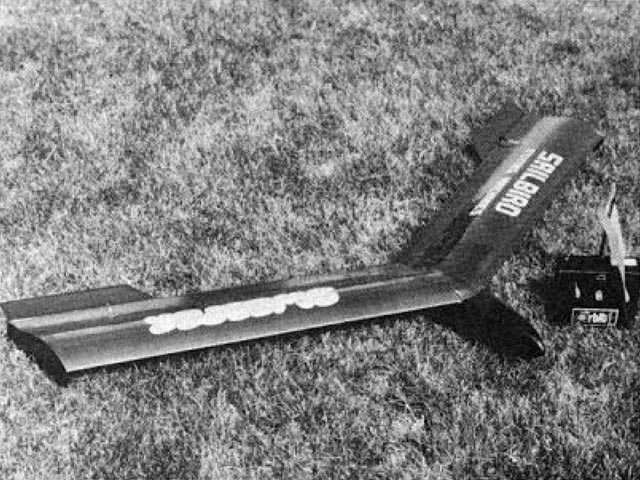