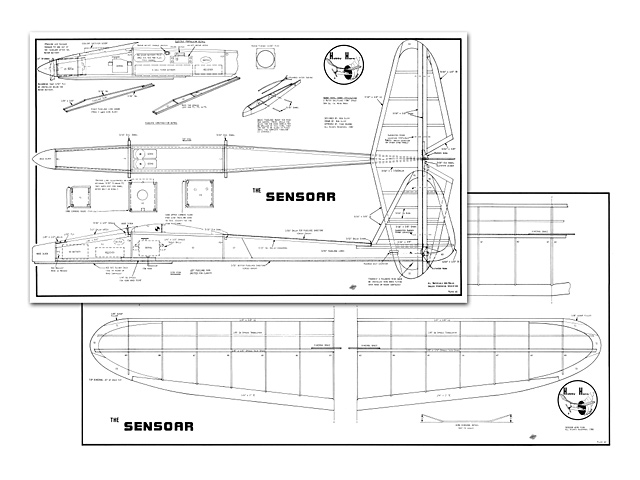 The Hobby Horn 'Sensoar,' designed by Bob Sliff, is a two-channel, two-meter polyhedral glider suitable for beginning builders and fliers. The model is well designed, easy to build, pretty to look at, and impressive to fly.

I first saw the Sensoar fly on a slope soaring trip to Cape Cod. I I iked the airplane's attractive appearance and graceful flight, and I decided to build one. This article is really the story of two Sensoars, the first constructed by my friend Rudy Coletti and the second by me.

KIT CONTENTS: I was pleasantly surprised to find the kit is available from Hobby Horn for a mere $18. For this modest price the kit contains all the balsa, plywood and spruce parts needed to build the model. Hardware, covering material, and adhesives are supplied by the builder. Wing ribs are machine cut as are the fuselage sides, formers, doublers, curved wingtip parts, and other small parts.

The kit includes two sheets of full-size rolled plans, and an eight page instruction manual which contains building, trimming and flying tips useful to those who are new to R/C gliders. According to the plans and instructions, the Sensoar can also be built as a motorglider, launched by electric or .049 gas power.

CONSTRUCTION: Detailed building instructions are given in a logical sequence. Construction uses traditional materials and common adhesives, and I believe most builders will be comfortable with the process.

The builder begins by pinning the wing center panel parts to the building board and assembling the pre-cut ribs to the leading edge, trailing edge and bottom spar. I used CA glue for the ribs and spar shear webs and aliphatic resin (tan carpenter's) glue for the top spar because a little longer working time is needed.

The wing outer panels are assembled in the same manner, and the pre-cut parts provided for the rounded wingtips save substantial time over making them yourself. The tip panels are joined to the center panel with pre-cut plywood parts, installed with epoxy. The result is a light, strong open structure, and the wing is completed by sanding and covering.

The stabilizer/elevator and fin/rudder are built like the wing, by pinning parts over the plans. Again, pre-cut rounded parts for the curved tips are provided. I used CA glue for wood assembly, epoxy to install nylon hinges, then covered the wing and tailfeathers with transparent MonoKote.

Fuselage construction is straightforward, and consists of installing longerons along the edges of the pre-cut fuselage sides, installing formers and doublers, and gluing the rear sides together using the plans as an alignment guide. The bottom sheeting and nose block are glued in place and the control rods and servo mounts are cut and installed. Again, CA glue was used for small parts and tan carpenter's glue was used for larger parts where longer working time is needed. I used a hot-melt glue gun to secure the control rod outer tubes, but I believe epoxy and specialty adhesives wi II work too.

When the top sheeting is installed and the hatch is fitted the fuselage is completed. The final finish on my fuselage is two coats of spray primer and one coat of spray enamel, sanding between coats.

Final assembly of the airframe consists of installing and aligning the tail parts and connecting the control rods.

The only portion of the construction sequence I found confusing is that the plans appear to show the trailing edge of the fin and the trailing edge of the horizontal stabilizer intersecting. It's as if two sticks are shown occupying the same space, and the instructions do not clarify the situation. Rudy's approach was to cut the fin stick; mine was to notch it. Both solutions worked out fine in practice.

CONSTRUCTION MODIFICATIONS: I made four changes to the construction procedures given in the instruction manual, based on watching Rudy's Sensoar fly. His model needed five ounces of nose weight to balance, and his fuselage cracked more than once in front of the wing during hard landings. Note that Rudy's model flies fine, I just thought that if I could lighten the tail to reduce the nose weight required, and strengthen the forward part of the fuselage, then I would have an improved airplane.

Two changes were aimed at reducing the weight of the tall. The first was to substitute smaller balsa stock for the trailing edge of the rudder and elevator. The second was to use thinner balsa sheeting for covering the bottom of the rear fuselage..." 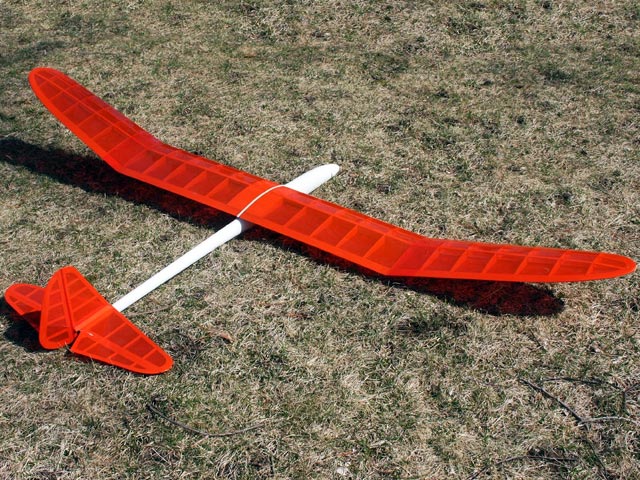