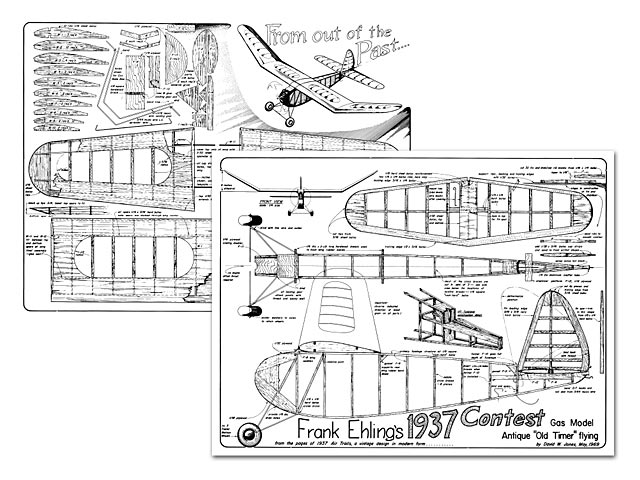 Quote: "Half-size Version of a great Old-Timer. A proven design that has been a consistent winner at many meets, said this magazine over 30 years ago. Contest Gas Model', by Frank Ehling.

(Publisher's Note: In 1937 editors weren't much for dressing up titles and it is a shame we don't have a great name, say like Starduster, for this great ship which won so many meets for Frank Ehling. So we say it like it was: 'Contest Gas Model.' This article probably makes Frank the first designer in history to have the same craft published twice - but 32 years apart. And by a coincidence your present publisher was then the editor of this same magazine - and couldn't think of a decent name apparently. Anyway, these things flew like birds. Build it, enjoy it - but by gosh don't let it fly away. It wants to. The following text is taken from the inscriptions on the Egyptian pyramids of prewar days.)

A gas model must be fundamentally sound in design and construction to withstand the wear and tear of flying. The fact that this model is recommended by Frank Ehling, its designer and builder, is proof that it fulfills this foremost requirement. His many years of experience with gas models has taught him what features to in-corporate in a successful design.

Other than simplicity and durability of construction, Ehling makes the following recommendations for gas models: The wheels of the model should be placed forward of the propeller, to prevent damage in the event of bad landings resulting from poor adjustment or from hitting an obstacle and diving to the ground.

A moderate-thick wing section should be used. It produces a slower flight under power and a better glide than excessively thin or thick airfoils.

The model should be finished with clear dope to give a transparent wing, with color dope used for the outline or scallops on the wing. This color combination will keep the model in sight the longest possible time.

Flying: The model weighs 3-1/2 lbs. The wing area is about 7 sq ft, making the ship rather lightly loaded. Test flying should be easier under these conditions. The model will suffer less from bad landings than a heavier model. Balance the model at the mid-point of the wing chord. The stabilizer has zero-incidence setting. The wing has one-degree positive incidence setting.

The model was adjusted to fly against the torque (to the right with a righthand propeller) and was adjusted to glide in the opposite direction. This was accomplished by offsetting the motor a slight amount to the right. The rud-der was set at neutral and the left wing was 'washed in' a slight amount. This allowed the model to turn in a smooth flight without any hair-raising banks and turns that accompany so many gas-model flights." 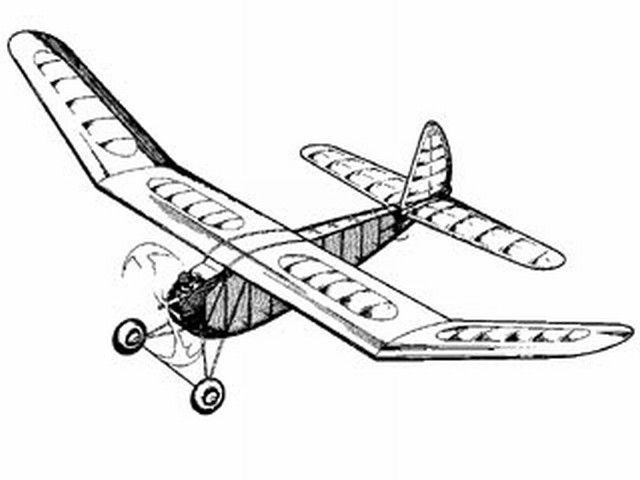