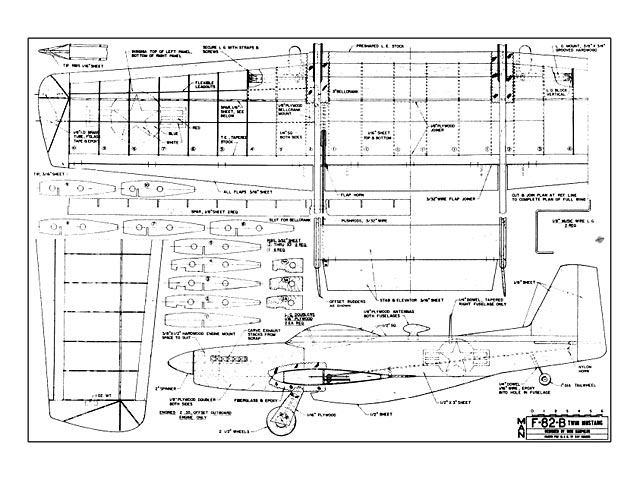 Quote: "Pure excitement is the keynote of this fine semi-scale profile control line stunter of the famous time and distance record-holder of the late fifties! F-82B Twin Mustang, by Dick Sarpolus.

This model is quick and easy to build, offers the excitement of twin engines and scale appearance, and flies well! The P-51 Mustang is probably the most modeled aircraft ever; the P-82 offers the same popular appearance in a double edition. Easily recognizable by the well known P-51 fuselage shape, the P-82 is really more than two Mustangs coupled together.

North American began the P-82 project in 1944 and finished the first two aircraft in 1945. Many changes were made to the P-51 design to achieve greater range at higher speeds. I visited the Air Force Museum at Wright-Patterson Air Force Base in Dayton, Ohio, recently (for about the twentieth time) and was able to stand where I could see both the P-51 and P-82 aircraft on display there. The design differences between the two planes are apparent: The P-82 fuselages are over 6 ft longer than the P-51; the rear fuselage contours are different; the underneath air scoops have a much different shape.

Over 250 P-82's were built and delivered to the Air Force during 1947 through 1949. They were powered by two Allison V-1710 engines, could operate up to 42,000 ft, approach 500 mph and were unusually versatile aircraft. They could operate as fighters, interceptors, night fighters, long-range escorts, light bombers - could even carry 2,000-lb torpedoes. The left cockpit had a full range of instruments for the aircraft commander, and the right cockpit had instruments for relief and emergency operation. In its night fighter role, the right fuselage carried a radar operator rather than another pilot.

P-82's, redesignated F-82's in 1948, were in Japan and Korea in 1950 at the start of the Korean 'police action' and were some of the first USAF aircraft to see action against the enemy. An F-82G is credited with shooting down the first enemy aircraft in the conflict. Although the F-82 came along too late for WWII, it did maintain our long-range fighter capability during the postwar period when our country was switching from piston engine to jet aircraft.

I am sure the most famous P-82 is the ship now on display at the Air Force Museum, the Betty Jo. Its claim to fame was well established during its nonstop Hawaii to New York flight in February, 1947. It covered the 4,968 miles in 14 hours and 31 minutes, averaging 342 mph. At takeoff, the plane weighed 30,000 lbs, carrying a total of 2,215 gal of fuel with four 310-gal drop tanks. The drop tanks could not be dropped due to malfunctions; this added drag, and bad headwinds made their trip rougher than planned. The craft had no auto pilots, so the two pilots alternated flying, without sleep or any food.

Of interest to modelers is that the command pilot, Lt Col Robert E Thacker, is now an active Radio Control flyer and has been pictured in several magazines with his R/C model of Betty Jo. He received the Distinguished Flying Cross from Air Force General Carl A Spaatz in recognition of the historic flight which demonstrated the P-82's capability.

This is the first Control Line model I have built in about 10 years. During that time I have been concentrating on R/C design and competition flying in all events, but after deciding to do some Control Line flying again, I wanted to scratch-build an interesting project. It was to be fully aerobatic, profile construction for simplicity, large and twin-engined to be different. The P-82 fills the bill in all respects.

The overall proportions are suited for good flying performance, and its appearance is stand-off scale. Wing area is 800 sq. tn., large enough for two .35's. The design does tend to be noseheavy; this is one reason why Fox Stunt .35's were used They are very light and, to this older Control Line competitor at least, have the reputation of being the absolute best engine for the job. The DuBro mufflers were picked for their light weight.

Enough preliminaries, now we'll get into construction of this project. If you're looking for a true shortcut and think immediately of using a Midwest P-51 Mustang (oz7079) kit as a base to cut down on the scratch building, yes, this can be done. Most of the time-saver would be in the wing since you would only have to cut ribs for the center wing section. The kit fuselage would have to be considerably modified; nose shortened (for balance), tail lengthened, air scoop contour changed, etc. New tail surfaces would be necessary; and a duplicate fuselage would have to be made. The plans show all necessary details to build the complete model, so for those of you who don't take the kit shortcut, we'll continue with general construction notes.

Wing first, the pre-shaped leading edge stock available at most hobby shops saves a lot of time. Cutting out the wing ribs is not much fun, but there's no easy way, and there really aren't that many ribs. The full depth spar, egg-crated into the ribs, makes a warp-resistant wing. Install the bellcrank mount solidly; the twin .35's put a good strain on it. The grooved landing gear blocks are set into the ribs and reinforced with the plywood rib doublers..."