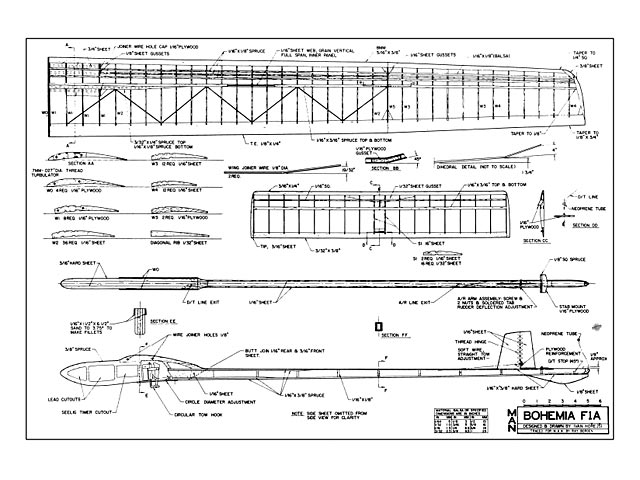 Quote: "Excellent competition glider by the Czechoslovakian whom the usually conservative Bill Hartill claims to be the world's finest FAI A/1 flier, the very best! F1A Bohemia, by Ivan Horejsi.

The Nordic Bohemia was designed after the World Champs in Sweden in 1971. I was a bit disappointed with my performance there. It was the fourth World Championships I participated in and after the series of good results in the previous Champs - I placed 13th in Kauhava, Finland 1965, 8th in Sazena, Czechoslovakia 1967, 6th in Wiener Neustadt Austria 1969 - I felt very strong. It seemed that improvement in the first round would do. I had spoiled only the first round at all of the previous contests. All of my models were furnished with the very new inventions of that time which was the hook for circular tow. One of my models had been developed particularly for flying in calm weather (94 in span) and its performance in conditions like that was at the 180 second boundary. Both early morning rounds turned out well but the disaster came later, in the 3rd and 5th rounds. I placed 18th at the end.

The eventual winner of the contest was my teammate Pavel Dvorak. From his models it could be seen that you do not need these thin, high cambered airfoils for the highest performance. In fact, Pavel's airfoil was rather thick but the wings of his plane were very rigid, despite the high aspect ratio. The glide of Pavel's model was really beautiful. I have to admit these models were a source of inspiration for me (among many others, indeed).

However, these ideas were brought to reality only a year later, in winter 1972-1973. When looking for some thicker airfoil which would allow for the high A/R but still rigid enough wing, I combined two of my favorites: B 7457 d for top and the good old Lindner for the bottom. The result appealed to me aesthetically and was reasonably thick. To meet the target, the tough wing, the double tapered wing layout was selected. As far as the tip shape is concerned I cannot say anything but I liked it.

The rest of the model - fuselage and stabilizer - does not differ from my previous gliders.

When the model was built up, it really proved reasonably tough. However, I cannot say the model was an instant hit. The glide was not as good as expected and the model did not turn properly in windy weather. Later on, the former was improved by the thread turbulator, the latter was cured when I cut away a piece of the fin.

I was happy enough to make the team for the WC in Wiener Neustadt in Austria 1973 again. I did not use the described glider for any official contest, however, it was my reserve. The things went wrong that time. In the third round I launched my model into something that looked like good lift but one minute later it turned into an awful downer. It was enough for me to place 51st and to wait for two more years for the uncertain opportunity.

In winter 1975-1976 I re-covered the wing. I used Jap tissue this time. It proved to be bad. The wing fluttered at launch. I was losing tension in line and the result was a violent stall. For this reason I had to re-cover the wing again in haste shortly before the WC in Bulgaria.

There in Bulgaria I succeeded with a string of maxes. I was very happy but my feelings changed a little when standing in the line of more than 40 people waiting for the fly-off. I took off as soon as possible to avoid a line tangle, ran ahead without circling on line and waited for some lift. I was happy enough to find a path of lift and end-ed fourth. In fact I was told I was third that evening. The mistake was discovered only on the following day but I cannot say I was too disappointed. The atmosphere of each W.C. is fantastic. It is worth it to meet people from all over the world though you are not able to speak with many of them. All of us are of the same stuff, does not matter which language we speak and which country we live in.

But back to the model. I prefer to start by building the wing first as it is the most complicated part of the model..." 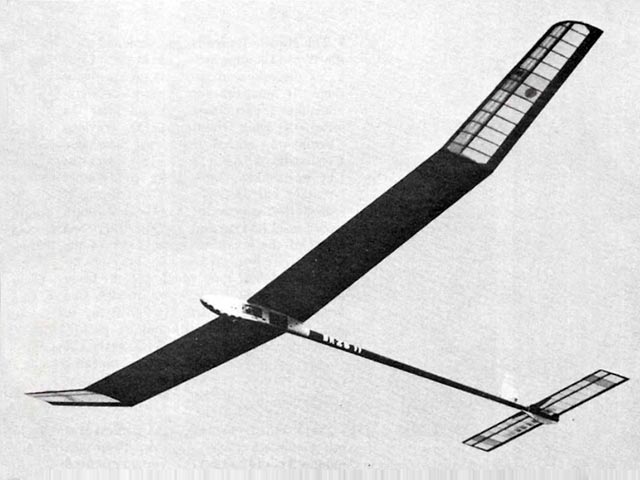