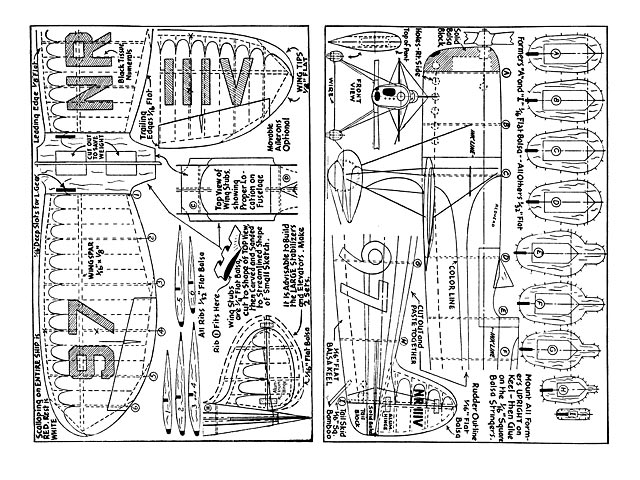 Note this design was first published in the Omaha Nebraska World Herald, October 1934. This here is a reprint from MB in 1975.

Quote: "Except that the plans had to be reduced by 97% in order to meet the 13 inch span limit for Peanut models, the construction article presented herein is reproduced word-for-word and line-for-line from two consecutive Sunday editions of the Omaha Nebraska World Herald, October, 1934. The model was designed by Ted Vogel, and the article was written by 'Bud' Schleh.

NPMRA President Glen Spickler sent us prints of the original newspaper clippings, and Walt Mooney built the Peanut model shown in the photographs, using the plans as printed on the following two pages.

Considering that they are over 40 years old, the plans and text are surprisingly modern. About the only thing missing is the word 'epoxy!' Wait's model is a fine, stable flier, and on the day photographed, it put in several 30 to 40 second flights. The most noticeable modifications are the installation of Walt's favorite music wire shock absorbing landing gear, and the rear motor peg relocation, to keep rubber weight forward. All of the flying and landing wires are nylon monofilament.

Perhaps no ship at the last Omaha air races holds more interest for model builders than Gordon Israel's Redhead. Many requests have come to me for flying scale plans of this sleek little racer, and here they are This model, much larger than any shown on this page up to now, and (don't get discouraged) requires a great deal of time and patience to build. However, the finished job will well repay you for your efforts.

Due to the length of the fuselage, it is necessary to show the side view in two sections. Cut these parts out with shears and paste them together to form a continuous side view then start construction. Note that along the bottom of the fuselage, from end to end, runs a keel using the dotted and the solid lines shown. Cut the keel from good, firm 1/16-inch flat sheet balsa. With a pencil, mark the position of the form-ers on the wood. Then, from 1/16-inch flat balsa, cut out formers A and I. The rest of the formers B to H inclusive, are cut from 1/32-inch flat balsa.

This type of construction (formers glued to keel, then connected) automatically lines up the fuselage from end to end, eliminates the need of a top view drawing, and also the need of building a box fuse first.

Between formers D and E, cover the cockpit with 1/32-inch flat balsa, sanded thin. Cut out the hole for the pilot's seat with a razor blade. Don't apply the celluloid windshield until after the ship is covered.

Make the nose-block from a block of balsa cut to the general outline of former A, then carved and sanded to shape. The inside should then be hollowed out, and a hole drilled for the nose plug. Then glue the nose-block to former A. To add realism mark the openings shown on the front view of the nose-block with India ink. Or, carve them in with a knife. On the real ship these openings provided air cooling for the motor. The six round dotted holes on the side view represent exhaust ports. They are on the right side only, and are either drawn on with India ink, or made of thin discs of balsa, painted black, and glued to the cover job.

The vertical fin and the rudder are built up from 1/16-inch flat balsa, using the outline given in the drawings, and have two connecting ribs built into them. These are shown by the double broken lines. The single broken lines simply indicate the scale number of ribs in the real ship's fin and rudder. The bottom part of the rudder is made of balsa block shaped to conform to former I, then tapered to the tail of the fuse. It is glued to the rest of the rud-der, and moves with it on aluminum hinges. The tailskid is made of 1/16-inch bamboo, securely glued to a notch cut in the keel.

Although the landing gear is not mounted to the ship until after the wings are built in, it is just as well to make the landing gear struts and wheel pants along with the fuse. The struts are made of 1/8-inch flat balsa cut to two and one-eight inches length and 1/2-inch width, then sanded so that the rear is tapered to an edge. Each wheel pant is built up of three pieces of flat balsa..."

Update 13/07/2020: Added alternate plan, thanks to Planeman, with full layout on a single sheet. This was previously a duplicate entry, and has been moved here from the old slot of oz1518. 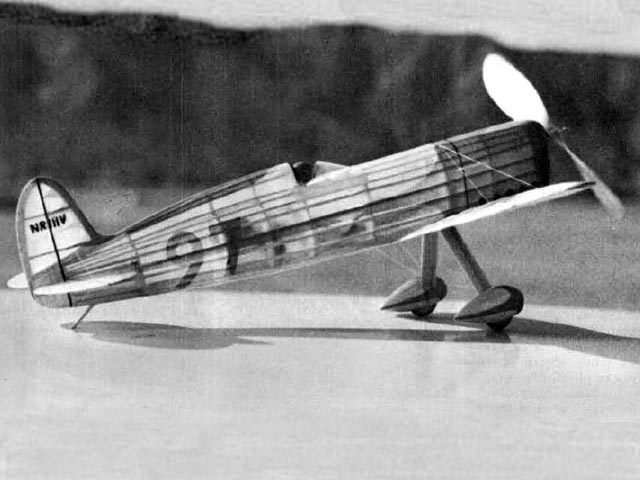