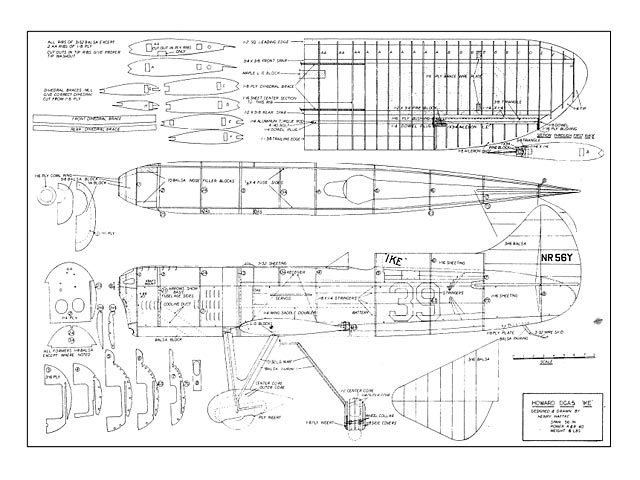 Quote: "From the Golden Era. Howard Ike 'Miss Chevrolet' by Henry A Haffke.

Model has exact scale outlines with no deviations, scale stringer locations and rib spacing. Scaled from 3 views in Charles Mendenhall's 'National Air Racers in 3 Views.' Additional details from Paul Matt's 'Historical Aviation Album' #13. Flight information and additional details from Harold Neumann who piloted 'Ike' to many racing victories and owned the aircraft in 1936 and 1937 when it appeared as 'Miss Chevrolet.'

During the Golden Era, air racing was one of the most popular spectator events. The names of the top pilots were household words. One of these top names was Ben Howard, whose racers were well known and achieved many wins; the feats of his last racer, Mr Mulligan, are still talked about. It was the only aircraft ever to win both the cross country Bendix Race and the closed course Thompson Trophy Race. It achieved this feat during the 1935 National Air Races. Mr Mulligan was Howard's last racer and it was developed into a commercial aircraft which has become one of aviation's classics. His first racer was a tiny, low-powered aircraft named 'Pete' and was a very successful winner over a period of several years.

Between Pete and Mr Mulligan came a pair of near identical gleaming white racers built for the 1932 National Air Races. These Menasco-powered aircraft were known as 'Ike' and 'Mike'. In the 1932 races, Ben Howard flew Ike and won two firsts and one second place. Bill Ong in Mike also did well and to top off the meet Gladys O'Donnell flew Mike to victory in the Aerial Trophy Race, winning a purse of $2,250.

The 1933 races were held in California and Howard engaged Roy Minor to pilot Mike as Ike was left at home. Roy won four firsts, two seconds, two thirds, and one fourth, including third place in the prestigious Thompson Trophy Race, winning a total of $7,000 in prize money. Later at the Chicago International Air Races, Minor took five firsts and one third, while Harold Neumann in Ike took third in the Baby Ruth Trophy Race.

In 1934 both racers were in top shape early in May and Neumann in Ike and Roy Hunt in Mike went on a barn-storming exhibition tour. At the National Air Races that year, Mike took two firsts, one second, one third, a fourth, and a fifth, while Ike took a fourth before damaging a landing gear, putting it out of further competition.

Neumann and Hunt then toured with the All American Air Aces Airshow. The pair of sleek white racers were real eye-catchers and thrilled crowds everywhere with their mock air races and acrobatic duels.

At the 1935 National Air Races, Harold Neumann in Ike won the Greve Trophy Race three straight days in a row. The sweep netted the racer $4,500 and Neumann received a check for $1,085 from the Cleveland Pneumatic Tool Co, sponsors of the races. Neumann then piloted Howard's Bendix winning Mr. Mulligan to victory in the Thompson Trophy Race, with Joe Jacobson bringing Ike in fourth in the race to win another $1,500. After the races Howard sold both Ike and Mike and Harold Neumann bought Ike for $1,500. After flying it in many airshows and in some races, Neumann sold Ike to Bob O'Dell of Pittsburgh in the spring of 1938. Early in 1939 it was sold again, this time to Fred Rovner of Cleveland. Ike sat around in various places and in 1950 Frank Bender of Fre-mont, Ohio, bought both Ike and Mike with intentions of restoring them. He has owned them for over 25 years now and little progress has been made toward their restoration. Howard's racers were truly great aircraft and hopefully Ike and Mike will be back in the air again some day. Mr. Mulligan has recently made its first test flight after being re-stored by Bob Reichardt. Pete is also flying today but has undergone many changes and has had many owners and would be unrecognizable as it was origi-nally flown.

I have wanted to do a model of Ike for many years but shied away from it because of its extremely long landing gear. I always thought it would be impossible on the ground. My desire to build a model of it overcame my fear of its ground handling and the model was completed. I engaged the services of our local test pilot supreme Sidney Clements to take it aloft for the first time. Its first flight was a thing of beauty, as after some taxi tests on both asphalt and grass showed no problems at all, Sid pointed it down the runway and applied power to the K&B .40 up front. The tail came up immediately and after a very short run Ike lifted beautifully into the air. The craft flew very smoothly and was looped, rolled in both directions, and spun in both directions on its very first flight. It was very stable and also proved to be very stable in inverted flight. Sid slowed the model and at low throttle with full up elevator, no stall or falling off occurred and full control was maintained easily in this condition. Satisfied that everything was fine, Sid brought the model in for a beautiful landing. My fears of takeoff and landing problems with the long gear were completely dispelled. Sid asked for a little up elevator trim as the model was a little nose heavy and also wanted a little more aileron throw to quicken the roll rate. These adjustments were made and a second flight was made with everything being perfect.

The model has proven to be a very successful contest bird in its first season of flying. Its first contest was the big West Jersey Mall Show held at the Depford Mall in Depford, NJ. Ike was judged best in Civilian Scale and also took home the coveted 'Best of Show' award over more than 60 beautiful models. Next, another trophy was earned at the Pleasantville Mall in Pleasantville, NJ. During the season it has flown in various AMA scale events held in New York, New Jersey and Pennsylvania, and has fared no poorer than second in any of these events. Only two models have beaten the Ike and these are well known to all, as both have been winners in previous National meets. Ralph Jackson's Windecker Eagle, and Bob Wischer's Douglas Mailplane are the only two models to top the Ike in AMA events to date.

All of the flight maneuvers that I do with Ike in its contest flight pattern are scale maneuvers which Harold Neumann performed in his air show routines with the real aircraft. Mr Neumann, who still actively competes in acrobatic competitions today with his all white Monocoupe called 'Little Mulligan', sent me a list of his entire acrobatic routine that he used to perform in Ike on the air show circuit. It was a great acrobatic performer as well as one of the most successful air racers in racing history.

Building the model of Ike is not a difficult project. Everything goes together quite easily. It may seem like a large model for a .40 but the structure is very light... " 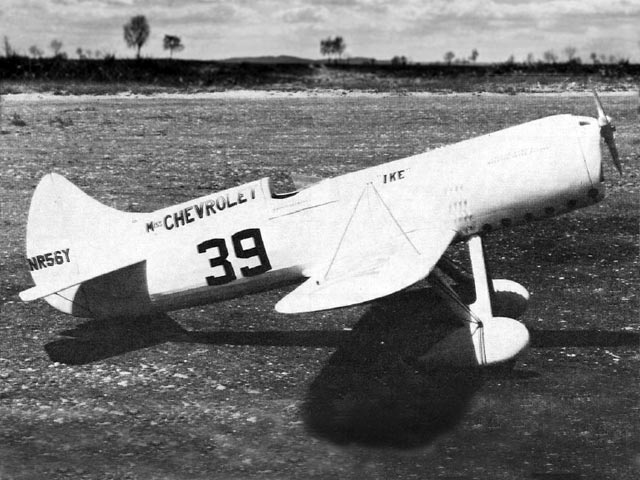