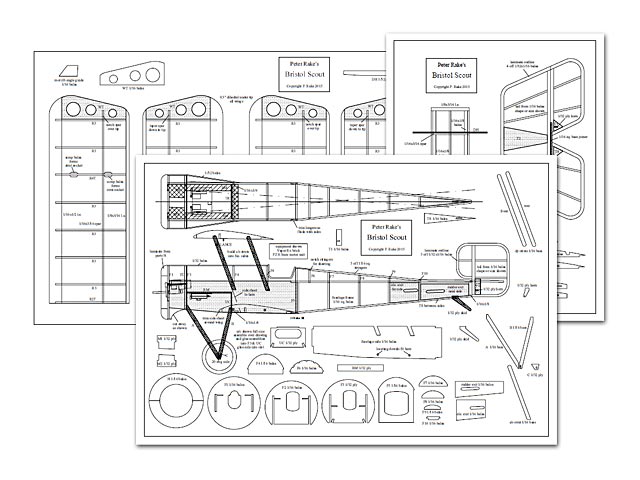 Note Peter Rake released at least two versions of the Bristol Scout design, online. This one here is 18 in span. See Bristol Scout (oz11569) for a smaller version at 14 in span.

Quote: "I'm not just throwing a plan at you and leaving you to work it all out for yourself. Thanks to Paul McCaughey we have a few photos to study and a more than fair indication as to how the model works out using the equipment shown on the drawings. Although Paul has only flown the model indoors, for which it has proved admirably suitable, we also have Spring rapidly bearing down on us, with all those gloriously pleasant, calm days for nipping along to the nearest park and annoying those pesky dog walkers by buzzing around at low level. Low level passes and the odd strafing run is usually enough to send them running for cover.

Equipment: There's nothing too complicated involved as far as equipping the beast is concerned. Everything you need is readily available as a spare part from virtually any model shop (even if some will have to order it). but a quick trawl of the inferweb thingy will reveal alternatives to the precise equipment shown on the plan. Different receiver 'bricks' and different 8,5 mm geared motor units come in many forms and of varying prices. Whilst what's on the plan isn't the cheapest by any means it is all well proven and reliable equipment that most of us have easy access to. Also important, especially for indoor flying, is that it's about as light as you'll get from a ready to run set up.

The one thing I would not advise doing is replacing the brushed motor unit with a small brushless motor. The geared motor is hard to beat for efficiency and will provide more than adequate power for this particular model without the need to resort to heavier, 2S batteries. The trouble with using brushless motors in these models is that the models themselves tend to fall into a sort of in between bracket. The brushed motors generally produce more thrust than the 1S brushless motors and are well matched to the model. 2S brushless motors, however tend towards a higher overall weight and far more power than is required. Great if you want a 3D Bristol Scout, not so good if you have to fly at absolute minimum throttle all the time. A moments distraction, or a slight slip of the thumb and your model has just smeared itself over the opposite wall. Yes, I know that can also happen with the brushed unit but usually not quite as violently because there isn't such a margin of excess power.

Okay, I know there are those out there who simply have to throw a brushless motor at every model they build, obviously they will do what it is they do. At least now you know why I advise against such a course of action.

The Build: As you can see from the plan and photos, there's nothing particularly complicated about the build. That being the case, and because of space limitations I'll restrict what I say about it to points I think you might need to know.

First and foremost, don't be tempted to 'beef up' the structure. I promise you, its perfectly strong enough exactly as shown. On models like this adding 'strength' is actually counter productive. All it does is increase the weight and mean the model has to fly faster to carry said weight. Flying faster just means that when it does hit something it does it that much harder, causing more damage than would have been the case with a lighter, slower model.

The basic fuselage box is built as two parts that are then joined and have decking formers, sheeting struts and stringers added. Build it as front ad rear sections and then join them over the plan to arrive at a straight, square basic box. Please note that the top longeron is tapered slightly where the tailplane will attach (aft of F10). That isn't a drawing error, it is deliberate and is why there is a 1/16 square doubler piece immediately below that area. I just find that having a small amount of positive incidence on the tailplane is more effective, and creates less drag, at keeping the tail up than applying down elevator trim.

Although the tail surface outlines are shown as laminated they don't have to be made that way. it's far and away the lightest and strongest (for the weight) method of producing them, but simple strips and corner gussets will work almost as well. Paul had trouble laminating his rudder outline, so made it from solid sheet. Not only the heaviest method he could have chosen but, as you'll see from the photos, also very prone to warping. I hasten to point out that Paul's model still flies well but I still maintain that lighter is better - especially that far behind the balance point. Remember, one extra gram that far back may require as much as seven grams in the nose to counter it. A total of almost 8% of the weight of the entire model.

When fitting those exit plates (which can be lightened if you are careful how you do it), bear in mind that they only work as intended if the receiver brick is in exactly the position shown on the plan. Otherwise there's a risk of the pushrods binding where they pass through the exit plates. Please note that the plan actually shows them on the wrong side..." 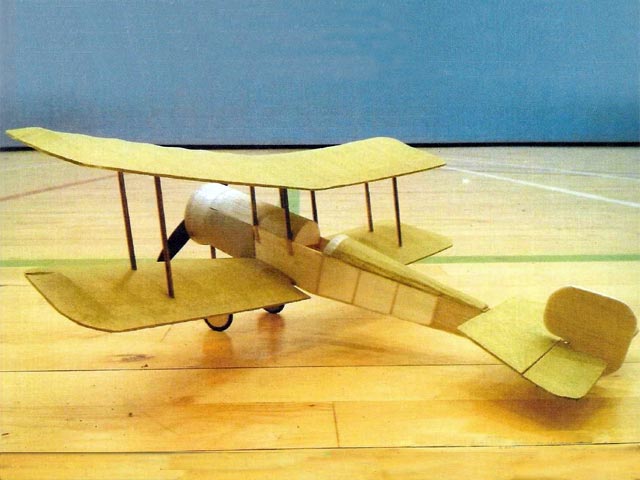