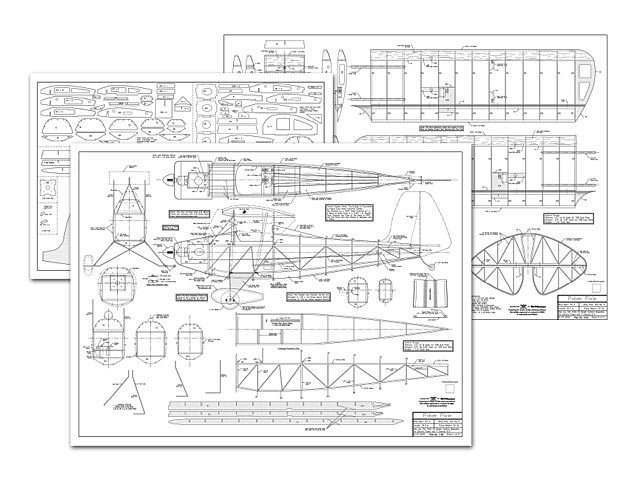 This plan is a free download available from the Model Aviation site at http://www.modelaviation.com/pober-pixie where it appears along with the full build text and some great build pics. Also a free download of the plan in tiled format.

Quote: "The Pober Pixie was designed by Paul Poberezny in 1974 in response to the EAA’s Project Econoplane. The goal was to develop a homebuilt airplane requiring minimal fuel consumption. The Pixie is an offshoot of the Heath Parasol in that it’s a single-seat, open-cockpit parasol monoplane. The prototype was flown using a Volkswagen 1,835cc engine, consuming only 3 to 3.5 gallons of fuel per hour. The design also featured full-span ailerons, which provided a good roll rate with minimal adverse yaw.

Later versions of the Pixie were set up with 65 hp Continental and Lycoming engines, as well as other lesser-known powerplants. The full-scale Pixie has a 29-foot, 10-inch wingspan, a gross weight of 900 pounds, a cruise speed of 83 mph, and a climb rate of 500 feet per minute. Construction is a welded, steel-tube fuselage and wood wings with fabric covering.

The Model. The Pixie is a 1/6-scale park flyer with a 60-inch wingspan, electric power, and four-channel RC. The outlines are true to scale, including the full-span ailerons. Construction is primarily of wood and features removable plug-in wing halves for easy transport. It requires no tools for field assembly. Power is provided by an economical outrunner motor and guided by four submicro servos and a 2S LiPo battery that will provide 15-minute flight times.

Before construction begins, take the time to read and study the plans to become familiar with the construction notes and assembly views. For those who would rather not cut the parts by hand, a wood and plastic parts package is available from Manzano Laser Works that includes the laser-cut, shaped parts and vacuum-formed cowl and wheel pants.

Preliminary Subassemblies. Begin cutting out and labeling all of the parts using the provided patterns. For the next three steps, there are 'How-To' articles available in Model Aviation magazine to cover these basic construction techniques. 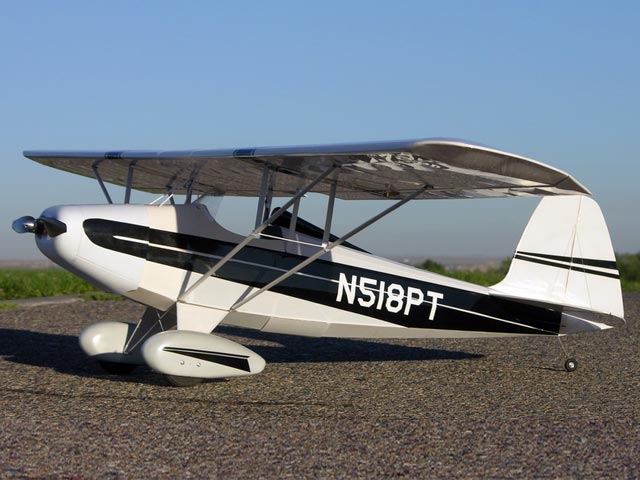