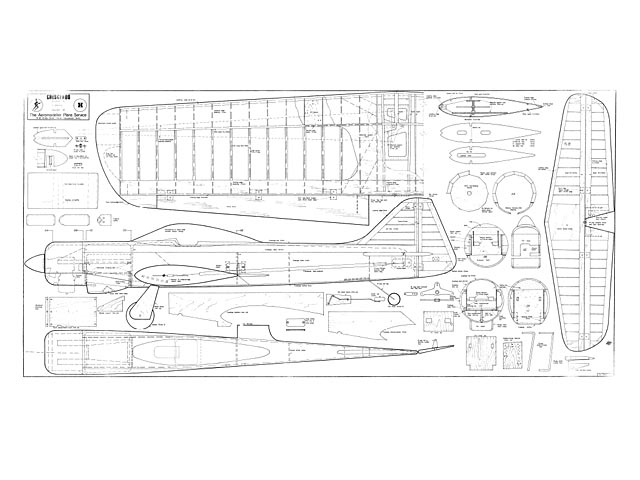 WHEN COMPETING at international level, you will notice a trend in model and engine size, a slight but steady Crescendo. The reasons may be different. In my case it often happens that I carry around an idea for a long time, I consider different pos-sibilities, look for information, talk to other flyers. One day I met the American, Al Rabe when he was on a short holiday in Germany. Our conversation provided the impetus to start designing my Crescendo and the biggest credit for the layout of this aircraft must go to Al.

At that time I had lost my regular flying field due to a judicial flying prohibition because of a noise complaint. This caused me to look for a really silent solution. I think that a considerable part of the noise is created by radiation of sound waves by the muffler itself, it was therefore clear that it should be enclosed in the cowl. In order not to reduce engine performance too much, the muffler should not have too small a volume which also helps keep the engine temperature within reasonable limits. The resulting dimensions required quite some space within the fuselage to allow reasonable clearances - after all, I didn't want my aircraft to catch fire in mid-air!

I was not too afraid of the drag resulting from the fuselage cross section, as at least that bulky muffler was not hanging out in the breeze. Finally. I was impressed by those magnificent flights by the Frenchmen Billon and Lavalette with their huge stunters. So I had enough reasons to look for a suitable 60 engine, the Super Tigre ST60 being by far the lightest of this family. The big engine was able to: handle the (expected) weight; ignore the power loss caused by the muffler; overcome the drag of the thick fuselage; swing the required large diameter propeller; take the necessary pump desired for fuel flow (forced upon by tank location); run at low RPM (reducing noise and heat); last but not least, produce a wonderful sonorous sound.

While waiting for the engine I realized that I was running into problems concerning tank location. Not wanting to make the fuselage still more 'roomy', the tank had to be placed right onto the engine bearers. As I knew that I had to produce my own carburettor venturi, it was impossible to bring spray bar and tank centrelines to the same level. I was nearly giving up the whole project when I remembered the American Perry Pump. The maker claims that tank location can be forgotten when using this pump and the pump action would probably help fuel flow, which is so important in control line stunt.

The American expert Clarence Lee anticipated one drawback which I read in his monthly column: if there was the slightest air bubble in the fuel pick up line (which would only
cause a tiny hiccup with normal operation) the pump would run 'dry' for a sort period of time before delivering fuel again, or the engine might even stop. So some extra thoughts were given to the tank design to provide safe and steady fuel flow. Fortunately a Perry Pump is available for the ST60.

While brooding on details of the design, I felt it was time to try some trimming devices to allow fine tuning adjustments on the finished model. As I did not intend to make the wing removable, fearing increased weight, some access to the horns is desirable, also the ability to change rudder offset, tip weight, and line rake.

To me drawing up a completely new design is a challenge, which I overcome by studying new technology and old wine - a very exciting time indeed. Since the approach was now completely different I could not use much from my earlier aeroplanes. The wing airfoil was all I took from my earlier Palatin design. The span is 64 in, if I have calculated right the overall wing area is about 950sq in. The airfoil tapers from 15% thickness at the root (including flaps) to about 18% at the tip. The fuselage nose was drawn rather short to compen-sate for the increased weight of the engine. Since there had to be enough room for a long tank - it had to be flat! The nose still looked relatively long, so the tail moment was lengthened considerably. To ensure good line tension, the fin and rud-der are of generous size.

The cylinder head should protrude from the fuselage as I expected increased temperature from the type of muffler. This engine installa-tion dictated the nose cross section. A 5mm clearance is kept between muffler and cowl with the resulting diameter of a scant 120mm and a well rounded nose, which is not too much area to keep the prop from working. While the cylinder head is well cooled, the rest of the engine should get enough fresh air from the front gap. The airscoop was felt necessary to cool the muffler. The hot air disappears through the rear of the scoop and two additional slots at the fuselage sides. The tank cover keeps the muffler from heating the tank. Special attention was given to the bellcrank bearing, platform and supports. I have never pulled a bellcrank out of any of my airplanes and I won't do so with this one either.

Before construction began, there was quite some work to be done. Running-in of the engine took place with throttle to be able to change speeds quickly and easily. Later an 8mm diameter venturi was turned with a spray bar of 3.5mm o.d. As the engine would not run rich with this carburettor the diameter was reduced to 6.5mm i.d. Fuel consumption was tested to give an idea of the final tank volume. At last the Perry Pump was added to chock operation with this device.To my surprise, a change of tank location height of two feet (1 ft up, 1 ft down) did not produce any difference in engine speed. A noticeable RPM drop or increase was found beyond these limits only. Change of the pump set-ting changed speed naturally. But after correcting the needle setting, running characteristics were the same again. So the pump was set at medium stage.

During my 'speed phase' many years ago, I had some experience in aluminium welding. So I tried to make the muffler and adaptor from this light material. l won't tell you how many mufflers I threw out. I asked my friend Arno Wamper, a well known engine man, for help. All he told me was: use steel! Now the muffler is constructed of 0.3mm tin and the 'elbow' is of steel. Weight is almost double that of aluminium but - at last - it keeps together. I used a Camping Gaz blow torch and silver solder, it works quite well. If you are an impatient character forget about it! Asbestos sheet and cloth of different type were also used..." 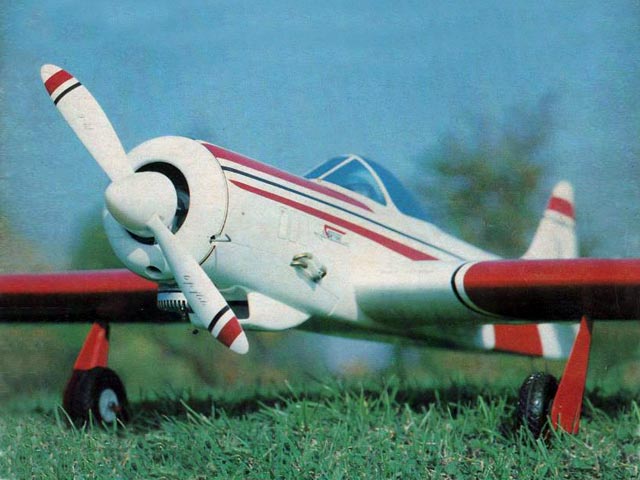