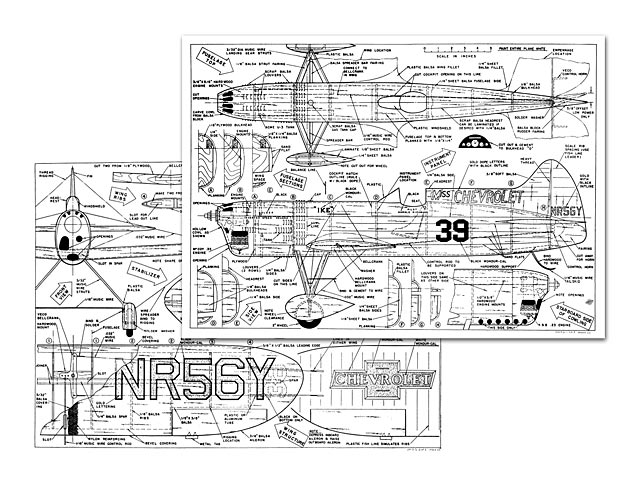 Quote: "One of the most popular racing planes to be duplicated in model form during the past three decades is the Howard Ike. This attraction to model builders is readily under-standable when we observe the clean, uncluttered, simple lines of the design which are not only pleasing to the eye but also reflect the fact that this, plane is easy to build, The beautifully enclosed engine unquestionably contributes to its attractiveness.

Successful race plane designer and air line pilot Ben O Howard developed the gleaming white Ike and its twin, Mike, during the 1930-1940 racing era following his outstanding Pete design. The Ike-Mike design attained its highest racing average speed when it won the Greve Trophy Race in 1935, piloted by Harold Neumann, at 213 miles per hour. These craft also placed in the Thompson Trophy Races of 1933, 1934 and 1935. Ike was powered by an air-cooled, inverted, six cylinder, 200 horsepower, Menasco engine.

The Ike was so small that the upper portion of the fuselage in way of the cockpit was removable in order to allow the pilot to enter the cockpit. When the cover was in place only the pilot's head protruded through the cockpit opening.

Our model is built to the scale of 1-3/4 in equals one foot. This size produces a model that can comfortably accommodate any engine from .19 to .35 cubic in displacement completely enclosed within the cowl. Despite the fact that the full size plane was fabric covered, the prototype model is covered with sheet balsa for strength and durability. Ribs are simulated with plastic fish line for a true scale effect. Scale rib spacing is shown on the plans.

Before construction is described, the author wishes to express his sincere appreciation to Mr Myron E Scott of the Chevrolet Division of the General Motors Corporation, for his kindness and assistance which made this article possible.

Carefully bevel the leading and trailing edges of the lower covering to follow the contour of the rib upper camber. The upper covering is added now; be sure to cement it to the bevelled portion of the lower covering as well as to the ribs and spar. A slot must be cut into the upper covering, to accommodate the control rod, before it is cemented in place. The wing tips are laminated with sheet balsa and cemented in place to the spar and tip rib. Note the lead-out wire tubing in the in-board tip which is inserted during the laminating operation..." 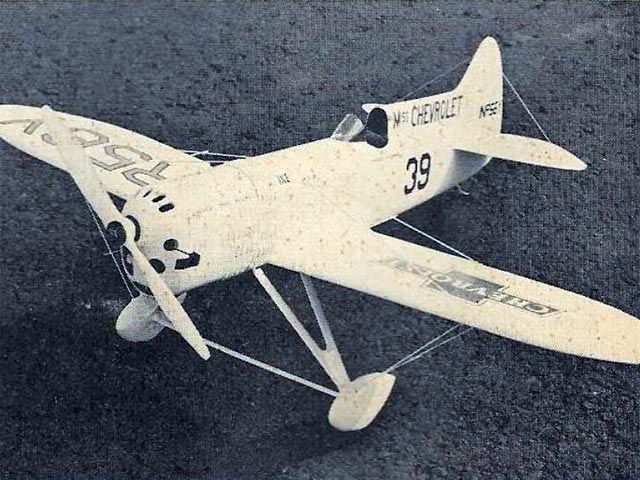