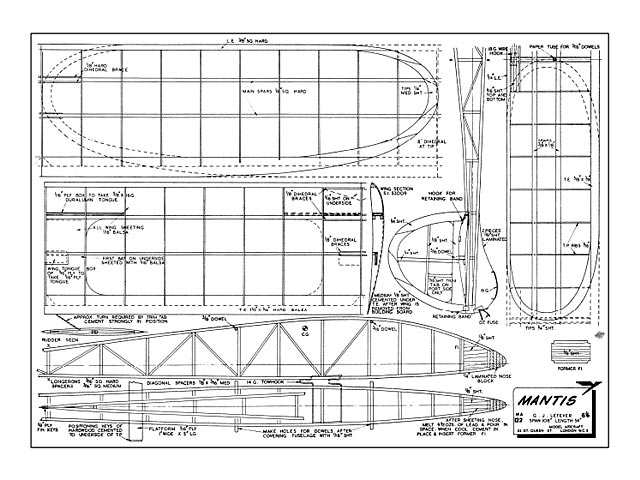 EARLY in 1950 the need was felt for a large FAI glider that would turn in good flights in any weather, and Mantis was designed to this end. Test flights were carried out in April 1950, and all through the summer the model averaged flights of 4:45 in cool evening air. Since then it has consistently made maximums in a wide variety of conditions.

Building. The construction is perfectly orthodox on the whole, the only points requiring more than usual care are the centre-section of the wing and the correct rigging of the tailplane assembly.

The two fuselage sides are built in the normal manner one on top of the other. The 3/16 sq longerons may have to be spliced to make up the required length but this will not matter in the least. The 3/16 x 1/8 in diagonals are added to ensure that the rear of the fuselage does not straighten out when lifted from the plan. Join the two sides with spacers and hold the fuselage together with plenty of rubber bands until dry.

Add the nose former and bind the 14 SWG towhooks in place with silk. At this stage the entire fuselage is sheeted with 1/16 in med hard balsa: sides first, then the top bottom. This may sound expensive, but it is definitely worthwhile and a fuselage results which will stand up to almost anything. Pour 9-1/2 oz of molten lead into the box formed by the nose sheeting and the nose former. When the lead has cooled down squeeze cement into the front of the box and then cement the laminated noseblock in place. A piece of silk is stretched out and cemented to the fuselage from the front towhook to the noseblock. This prevents the sheeting from being torn up when runway landings are made. The fuselage is now completely sandpapered, the holes made for the wing dowels, the ply tailplane mount and underfin are added. The fuselage is covered, wing dowels fitted and finally are added the address label and a piece of tinfoil on the underfin where the DT fuse burns through the small rubber band.

Wing. The two wing panels are laid down on a board in the normal manner. Eight inches of dihedral are installed under each wingtip and the hard balsa dihedral braces are cemented in position. Join the centre sections together and pin down as one unit for the purpose of sheeting the leading edge - with a piece of 4 ft balsa if possible. After the cement is dry the wing is again cut apart. By using this method a perfect join is obtained..." 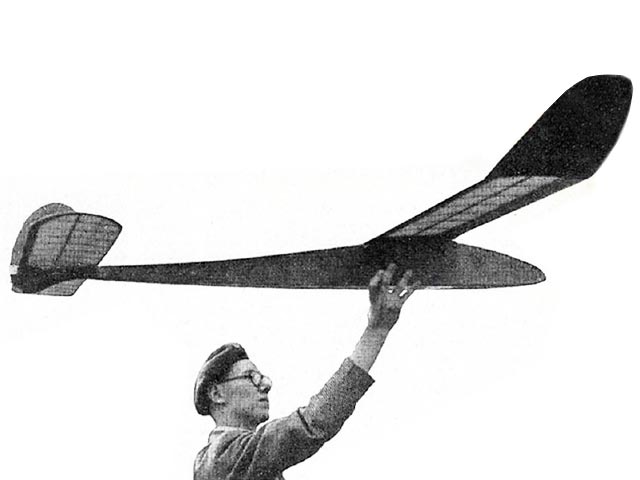