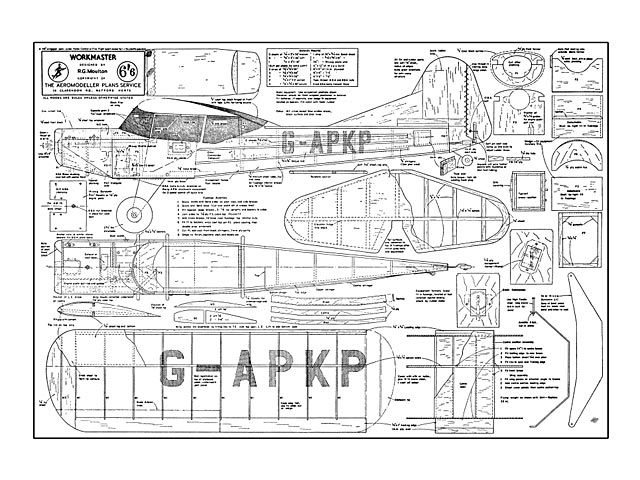 THIS MODEL is no stranger to the locals. The airframe was built in August 1958 to a specification laid down at that time for a model to fill an enormous gap in the plans and kits available on the British market

The specification was as follows: The model should be of a size to suit most pockets, 1-1.5 cc engines; it must look right and fly right: it must have a specialized structure for its purpose of single channel radio control. It should be a weight carrier; have a voluminous interior and be adaptable to a wide range of equipment and engines; it must be repairable without risk of affecting trim; tough, up to date and practical.

For appearance sake, the near scale approach so well explored by deBolt kits has greatest attractions. Coincidentally, Austers had just announced in 1958 their hybrid airframe for agricultural purposes with large tail surfaces, stronger undercarriage and big wheels plus a broad cowling for a horizontally opposed engine. This, then, was to be the inspiration, and Workmaster is in most aspects a true 1/9th scale model except for enlargement of the tailplane, solid windows, simplified undercarriage and lack of struts.

Completely new thought was inspired in fuselage structure. All sheet construction with single creases in sides and base, one bulkhead and one former make for the easiest possible form of assembly. The volume within the fuselage under the wing is sufficient to take the most bulky of equipment. Bearers fitted to the fuselage sides, braced by a ply-former at the front and the replaceable engine mounting plate form ideal vibration dampeners. The double laminate windshield adds rigidity where wanted and the dowels are so arranged that in a really serious prang, the wing slides straight off.

Tail surfaces with anti-warp features are fixed after the initial glide tests. Slight adjustment made on the prototype is incorporated in the design.

The wing is made to work. That is to say, airfoil is NACA 4415 sheet surfaced over the working area where it matters, with the result that the Workmaster will lift a loading of up to 20 oz/sq ft without difficulty. The normal operating loading is about 12-14 oz/sq ft. Spruce spars and three dihedral braces have kept the wing together after innumerable cartwheel landings. Over the centre section, the dummy cabin top lifts to reveal a space sufficient to allow access for tuning.

The dural undercarriage is simple but in case of difficulty of supply could- be replaced by a built-up 12 swg wire frame with sheet filling. Despite many ups and downs, the only damage suffered to the prototype has been shock tears in the silk covered wing panels, which will give an idea of the strength of the structure. The cabin top has ripped off, and once, when a wing tip caught a fence, the impact as the fuselage swung round was sufficient to break away a large area of the rear fuselage (see pictures for repair detail).

In every respect the Workmaster has more than lived up to its name and met every aspect of its original specification. It has been subject to all the trials and tribulations of working out best installation for new equipment and its current gear is still the original Mini-Reptone, Elmic Commander Compound and F Rising 4 position clockwork escapement for engine speed. The AM.15 is most responsive on a 9 x 4 propeller.

Every effort should be made to insulate mechanical rattles. Connections from push rods to escapements should be covered with Systoflex or thin fuel tubing. Battery supply to the receiver should be regularly checked. The editor uses 4 DEAC 225 cells to provide 4.8 volts instead of the normal 3 U7 dry batteries. Those who intend to use the same set-up are strongly advised to study data sheet 12 issued with Radio Control Models & Electronics for September 1961, which covered just about all the possibilities and condensed most valuable information on the Mini Reptone. Full building instructions are quoted on the plan and should be sufficient for the relative novice.

Flying the Workmaster is by no means nerve racking. It performs admirably without radio control, and will hold a reasonable course although it is no competition model. " 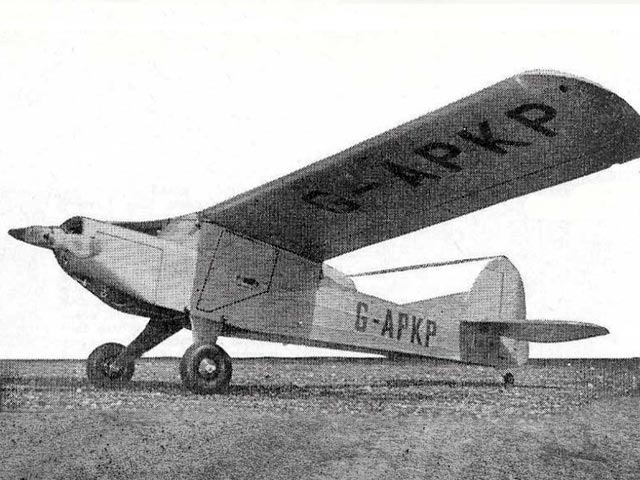