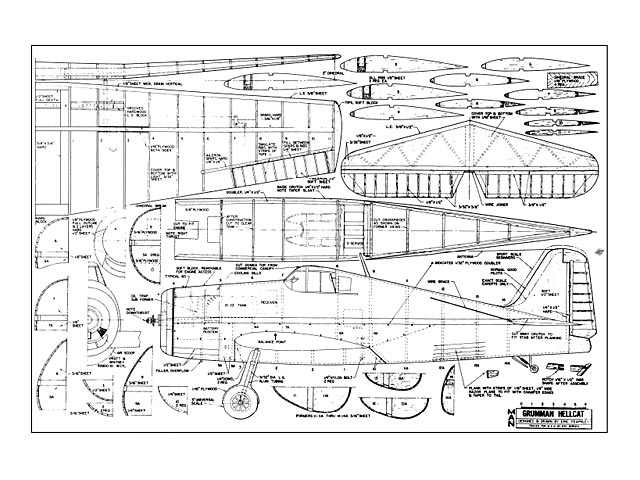 Quote: "Famous World War II Naval Air Force fighter in all its pristine beauty for the fellow who likes to fly as well as build. Typical scale construction methods make this a project for the average builder! Grumman Hellcat, by Eric Fearnley.

I build scale models to re-live the stirring adventures the real planes experienced, rather than worry about the next competition and what the judges will think of my model or my flying.

I have only one set of gears, so I build for general Sport flying rather than Concours. This doesn't mean that I am satisfied with a low standard of accuracy; in fact, I try to keep as near to scale as I can, but I do build simple and light, as heavy scale models just don't fly for the simple reason that the heavier the model gets, the more work the wings and tail have to do, which in turn means the faster the thing has to fly to even keep in the air, which means the more work the engine has to do, which means the bigger the engine, the heavier the model will get and so on ad infinitum.

As a veteran who was building scale models 30 years ago (without radio to control them), long before most of our present guys were born, I advise that you keep the weight down, particularly at the tail end, as all scale jobs end up tail-heavy. The Hellcat is flying without ballast, which outlines the care in choosing the right wood - light at the tail, firm at the stress points.

The Hellcat, you will see, is small, and powered by one of the outstanding 61's, the Webra, which is not only powerful, but also thoroughly reliable, throttle-wise. The finished aircraft is small, light and fast, be-ing very sensitive to control, making it safe but spectacular. It's no good building a scale Hellcat unless it flies like one, and this sure does.

Do not attempt this project unless you can handle a fairly hot FAI Pattern ship - the Hellcat is probably a little easier to fly, as it is so well balanced. The fin looked so small I was tempted to fiddle with it, but thought 'Grumman knows best' and stuck strictly to the outline - that is, to the outline I finally chose. In fact, I have four drawings of the Hellcat and a plastic kit. All are slightly different, some hopelessly so. I studied photos and drawings till my head ached, and finally chose the one that looked right. This was blown up photographically for accuracy, so it should be a fairly good likeness.

The result is a very well-balanced aircraft. The Friese-type ailerons are necessary due to the small area, but built to the plan they really bite, but very smoothly. The ailerons alone produce lateral roll only (as they should) and prolonged use of them means a side slip effect that few home-designed ships can manage. The elevators are also light and easy, needing only a touch of the stick, and the aircraft is most pleasant to fly, except for the speed, which does not allow day-dreaming.

It's a funny thing to study the history of the fat Navy fighters. In the thirties, the Navy just would not buy liquid-cooled aircraft - it had to have a radial engine. As power went up, it became necessary to fatten up the bodies to streamline the ship, but this fatness never seemed to slow them down. The original 'fatty', the Grumman F2F1, and the Buffalo, the Russian Polikarpov I-16 are examples of this theory.

The model looks like a barrel with gnat's wings attached in the air, but it is surprisingly fast, being able to hold its own against a sleek model of equal weight and power. The large cowl has little effect on the flying, but of course in building small, it was possible to concentrate a big motor inside the cowl without having the pot sticking out.

My first Hellcat had an inverted engine (which the comp boys will follow) completely hidden. My test flight was a complete disaster. The brand new radio gear went mad, and I got a knife-edge on take off, inverted flight at 30 feet and a hairy circuit followed by a snap roll straight in. At the time I thought I had finally built myself a monster, but after my Skyraider came in I realized that the radio was out. The trouble was the battery pack spot welding.

When I re-built, I decided to have the pot level with the top of the cowl, as the Webra wanted two flicks to start inverted instead of one when upright (I'm a lazy guy), and I wasn't bothered about what the judge would say. It is invisible at a few feet, so who cares? In the re-build, I added a few modifications to make for a better flyer, and the result is a smooth ship. I do advise the use of the downthrust - it helps the pilot fighting trims all the time. As the plan shows, it flies power on, power off without change of attitude directionally or longitudinally, which is one thing less to worry about.

The real point is that it does not want to exceed seven pounds dry, ready to fly; it must balance exactly where it says, it must have the surfaces (wings and tail) all true, the controls smooth and return centering accurate, and the rigged incidences as per plan. Follow this and you will fly the ship, otherwise it will fly you

Now let's get the building board out. I am not going to give full instructions as this is an advanced project and if you are capable of flying it you will know how to build it. However, I will cover one or two points.

The fuse is built on a jig made of 1/4 x 1/2 in wood. You will see that the rear twists in to meet the angled cross pieces. This is best done with a little steam if the wood is difficult. The engine plate is ply, built into the jig. Note the downthrust angle, and pack it up suitably.

The formers are added top and bottom, and the control tubes added. It is then planked up in sections. Some areas can be covered in fairly large pieces; others will want 1/2" strips tapered rearwards. Don't forget the doublers which fit below the jig at the wing position..." 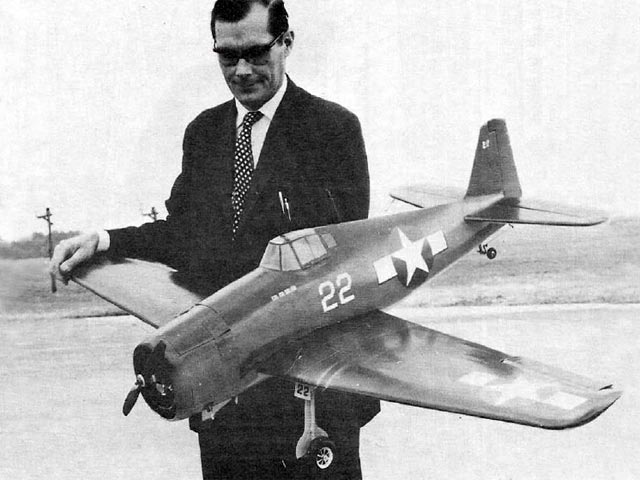