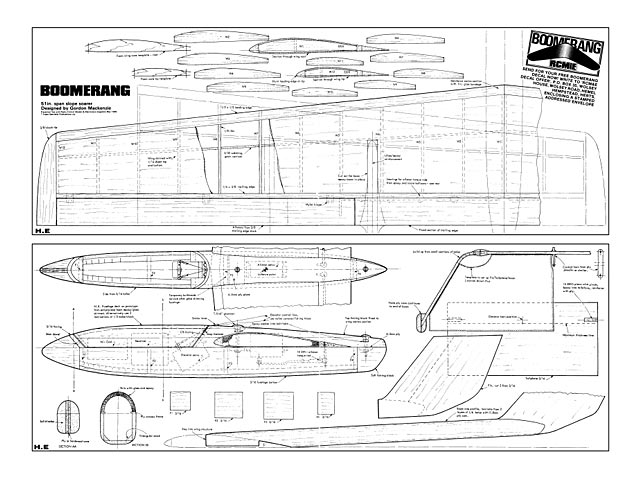 BOOMERANG has many of the attributes of that famous Australian aboriginal flying device. It is launched by hand, it usually comes back to somewhere near the point of launch, it is made from wood and it originated in Australia. I only wish I could take it one step further and say that it was designed by an Aboriginal Australian, but with a name like Gordon Mackenzie I think you will realise that my racial origins are elsewhere.

I've had a lot of fun with 'Boomerang' and it has claimed more than its fair share of attention both from flyers and interested members of the public who frequent our flying site. There have also been many requests for plans over the two year period during which this machine has been flying. To these requests I have usually said: 'There it is; measure it and look at it all you want and then build it your own way.' This does not seem to suffice however, as most people like to have plans and instructions before they will start to build. If I think back a few years I would have been the same so I can sympathise with these conservative but discerning attitudes.

I didn't build 'Boomerang' with any particular function in mind, it's not 100% aerobatic because I simply cannot contemplate symmetrical or near symmetrical wing sections for gliders. Anybody will recognise that the Eppler 205 section is not happy upside down for long, but it has good penetration and speed range characteristics. It has become obvious to me that the role of the 'Boomerang' is in slope pylon racing because of the apparent efficiency in conservation of momentum in high rate turns and the good penetration and acceleration at low wing loadings. A pylon racing version would have to incorporate more space for ballast, however. I have entered the 'Boomerang' in a pylon race in which it came second mainly because I could not ballast it up enough. I say that anyway to save face: it's likely that my flying was at fault.

The second aeroplane of the series; which shall be nameless, had a short coupled tail, still with an all moving stabiliser and a low cambered bi-convex section. It was built purely as an aerobatic fun machine. It flew quite well but was not without vices. Most notable among these was its entry into a spin any time full up elevator was pulled. This could have been corrected quite easily by limiting the elevator movement and perhaps reducing the tail area slightly but it was fun to have a 'bag of snakes' on my hands and it was interesting to watch anybody else who asked for a fly trying to handle this slippery and mean little machine. I eventually tired of flying it in its original form and it now awaits conversion back to longer tail moments having in the interim been used as part of a canard type slope soarer. As you can see; I'm into experimentation.

The third aeroplane in the series was an attempt to produce a compromise design suitable for pylon racing and aerobatics. It had ballast tubes in the wings which were loaded from the middle of the wings with lead slugs about 15mm diameter by 50mm long. This gave a total ballast of over a kilo which is not bad for the size of the aeroplane. Reverting back to the more understandable Imperial units, this allowed me to go from 12 oz/square foot to 23 oz/square foot by adding ballast. The wingspan was 60 inches and I had modified the Eppler 205 to give some inverted performance and generally cleaned up the design. This aeroplane was shaping up to be a great performer when I overcooked it on the elevator whilst it was halfway through an outside loop carrying full ballast on a very windy day. I admit that you should at least build them strong enough to withstand any aerodynamic load, but I had simply been lazy and the wings parted at the centre joint. The earth shook as the ballast slugs buried themselves and the air was filled with confetti and undeleted expletives. A lesson well learned.

Construction is, I assure you, easy because I am a naturally lazy slob and I'm always looking for the easiest way to do things. These days I wouldn't even consider a built-up wing for a slope soarer, so I hope that foam cutting is not outside your range of capabilities. The only other departures are some epoxy resin, light glass cloth, some rn-icroballoons and if you are lazy and impatient like me, cyanoacrylate and 5 minute epoxy. You don't need to build the thing my way, but here's the way I did it.

Construction methods. Start by cutting the foam cores from the root and tip templates given in the drawing. The section I used was the ubiquitous Eppler 205. No washout was included in the original machine and it does not appear to have suffered any ill effects. Fully sheet the wings and add the leading edges. Go along the inboard trailing edge joint with cyanoacrylate to add stiffness. You don't need to go beyond the point where the boom comes out of the wing as you will be fitting solid balsa ailerons outboard of the booms.

Note photo of completed Boomerang model was found online at https://www.rcgroups.com/forums/showthread.php?60991-Boomerang-Twin-Boom thanks to Urbanarmitage. 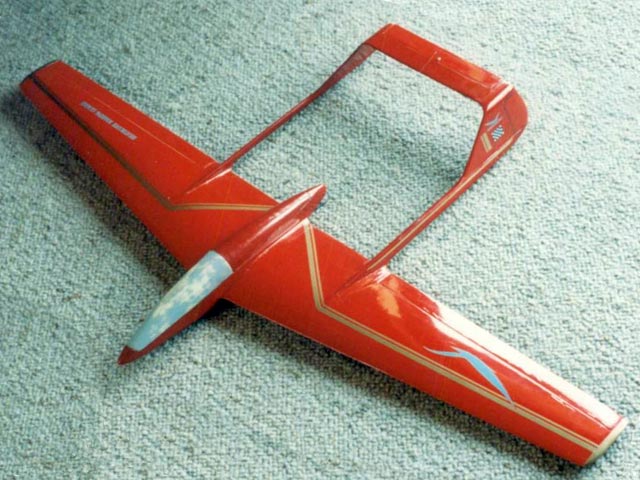