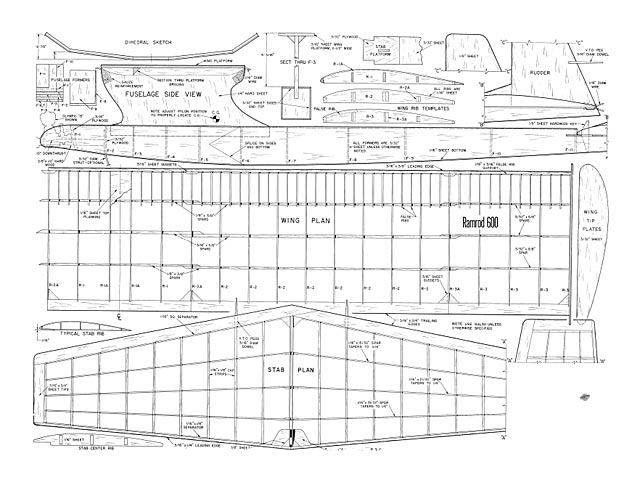 With the announcement of the 1959-60 AMA rules, many free-flighters have raised the question of how to best cope with the new power loading, which has been raised from 100 ounces per cubic inch minimum to 173.4 ounces per inch.

We feel that a gradual, rather than abrupt, change will be made in designs to conform to the new power loading. The first phase in converting will be in the direction of utilizing older models. Half A's will be loaded to 8% ounces with perhaps an extra section being added to the wing, 19 jobs will drop to 15's, and 29-35 models will utilize 19's and the new 20's. It is felt that this is a logical interim change, in that it permits the use of already existing equipment.

The purpose of this article is to show how a Ramrod 600, designed originally for 19's and 23's, was first adapted to the new rules. In our case, we simply rehashed a 600 built one year previously. You may wish to take advantage of the availability of full size plans to build your first 600.

In converting the 600 pictured on these pages, we first pulled the radially mounted 19, mounted the gear on its own plywood bulkhead, cut two holes in the old firewall to accept hardwood mounts, and finally bolted a new Cox Olympic 15 to them. With this hot engine, maxes come almost as frequently as they did with a 19 pulling a model weighing two ounces less.

Except for a slightly longer fuselage, the Ramrod presented here is aerodynamically the same as those flown four years ago. Most other changes are of a structural nature and were dictated by experience. Wheels were found to be unnecessary. (Making a conventional ROG with just a strut convinced us of this.)

It might be well at this point to pass on something else learned by experience: Ramrods seldom break up, but when they do it is generally because of a lack of decalage, or incidence, the model zeroing out, so to speak. For this reason the Ramrod CG has been moved ahead to 80% of the wing chord back of the leading edge. This will insure a little more decalage. Also, it is highly recommended that no plasticizer (castor oil, TCP, etc.) be added to the dope to retard shrinking. A great deal of any surface's rigidity is in the covering, and we do not want a very flexible surface - here is why: The center of lift of most wings is behind the center of structural strength, or bending line; so, as the speed of a model increases, there is a tendency for the wing to flex in the direction which will reduce decalage and cause the dive in. This tendency is predominant on lightly built, lightly doped, hot airplanes which are trimmed to nose up only a negligible amount under power. Such models may be suc-cessfully flown for months, but it may take only one hot, sultry morning, which will loosen the covering a little to result in their demise. To summar-ize then, keep the covering tight and use enough incidence to effect a definite nose-up tendency under power. This suggestion applies to any contest free flight model.

Construction of the Ramrod 600 is similar to the Ramrod 250 (oz6344), except that full ribs are used in the wing instead of the 'semi-ribs.' Plans may be scaled up by multiplying all dimensions shown by four, but of course full-size plans are available.

The wing is started by pinning the notched trailing edges and leading edges to your workbench. The 1/16 x 3/16 false rib support is then cemented to the back of the leading edge. Clean off all cement which could later hold up a false rib. Fit all ribs except at dihedral joints, and cement in. Since the tip spars are of an unusual sire it is best to cut them from 3/32 in sheet, as is done in the case of the tapered stab spars..." 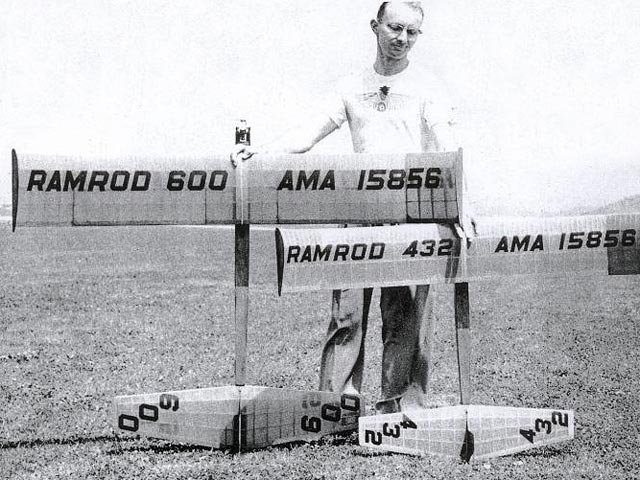