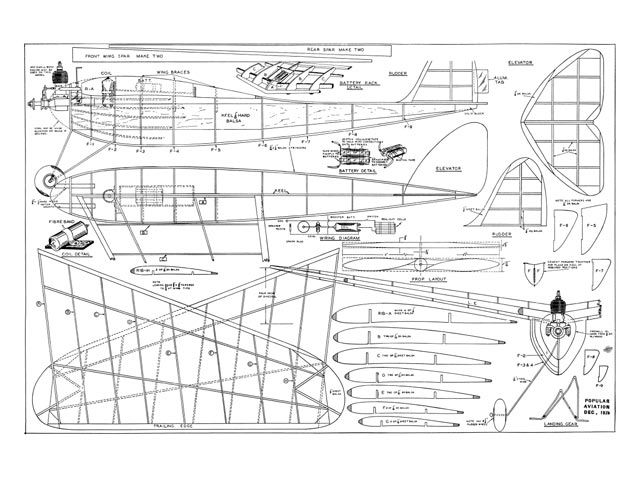 THE PA Special was primarily designed for unusual flying ability. The design as a whole is very simple in its construction and the model can be built in a remarkably short time. Motor and ignition unit are so situated that they may be easily checked and repaired.

Any color scheme may be used. However, for the benefit of readers, the particular model shown here was black and trimmed in orange. It may be powered with any 1/7 hp motor.

By enlarging the plans four times the size shown here with an ordinary pair of dividers, the correct size will be had for completed model appearing in this article. Weight of this model ready to fly should be approximately 18 ounces. Our model weighs exactly 18 ounces. However, this weight will vary slightly due to different type motors used.

Construction of Fuselage. Method of construction used here is of the keel and former type. The keel is made from 1/8 inch thick hard balsa Next cement all formers, which have been cnt from 1/16 inch sheet balsa, in their proper positions. Then attach the firewall, which is cut from 3/16 inch veneer. All stringers are made from 1/16 inch x 1/8 inch strips. In placing these on the fuselage, it is very important that they line up properly from front to rear. Eliminate any irregular curves which might occur in fastening the stringers to the formers so that a first-class covering job may be had.

Landing Gear. From 1/16 inch OD spring tempered steel wire, form the landing gears to their proper shapes. They now are ready to be cemented into the fuselage. Rein-forcement blocks are used at the various junctions where the landing gear ties in with the fuselage. Use cement exces-sively at these points as a great deal of strength is required here. Where wire landing gear comes together to form the axle for wheel, the best method for binding these together is to fix them with copper wire and solder.

Elevator and Rudder. These both are built of the flat section. Very little is to be said about their construction, as they are probably the most easily constructed parts of the model. It is suggested that you pin them down upon some flat surface while cementing, in order to prevent any warping.

Construction of Wing. The wing is of the cantilever construction and requires little more work to make than the ordinary straight wing, but the added performance and appearance one gains from this type of wing makes it well worth while to construct. From 1/16 inch sheet balsa cut the various ribs, with the exception of ribs 'A' which are made from 1/8 inch sheet balsa. Next to be cut to shape are the spars, leading and trailing edges. The various parts now are cemented together so as to form two separate panels. Wing tips are made from sheet balsa.

When the two halves of the wings have been completed they are blocked up to the proper dihedral angle and cemented to-gether at the center. Note the short reinforcement spars at center of wing.

Framework of wing is next cemented securely to top of fuselage. Provisions for battery rack now are made. Motor mount and other small details are clearly shown on plan and, if studied carefully, no trouble should be encountered here..."

Quote: "Hi Steve and Mary, Hope these scans are useful for the fabulous Outerzone. Kind regards" 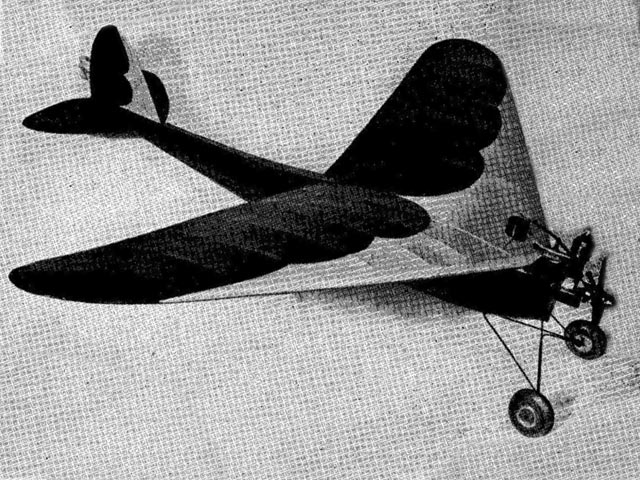