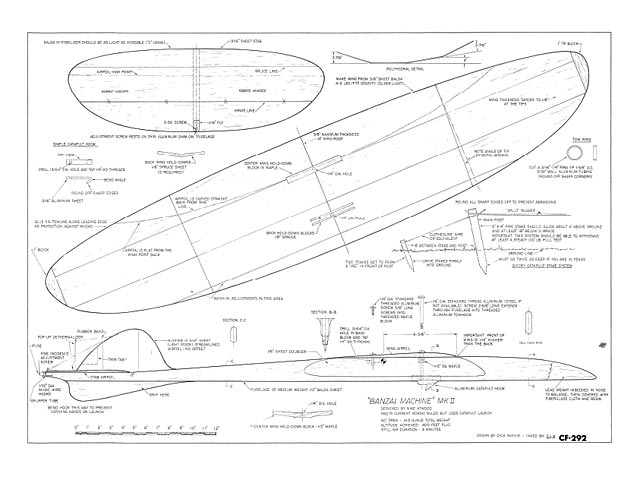 For years we have lived with the spectre of the 180 second calm air flight time Nordic as a seeming impossibility. Although some claims have been made for this type of performance in calm or near indoor conditions, doing this on a contest day has been close to impossible. Enter the 'Banzai Machine!' At the sight of it, grown men quake, the sun gods recede into the clouds, and the wax pops out of contest directors' ears.

Envision a Nordic glider climbing 500 ft and flying nearly four minutes in dead air. You may think it is impossible, but the Banzai Machine is getting close! In fact, flights approaching this have been made even without the use of the blue cape with the red 'S' on it. As you may have guessed, the BM is no garden variety Nordic. Some will say it sprung from the valley and a green giant flies Handlaunch with it.

In actual fact, this airplane borrows heavily from hand glider technology. Even the launch is scaled up hlg, using surgical tubing or shock cord for an 'arm.' Stretch the rubber 'arm' to 80+ lb tension and let fly with it. The speed of departure is impressive.

All seriousness aside, let's look at the history and theory behind this development. The first thing that had to be settled was the legality of this procedure. In the opinion of AMA Technical Director Frank Ehling, FF contest Board Member Buz Averill, and FAI FF Program Administrator Dave Linstrum, this airplane and its launching technique are legal under present AMA and FAI rules. The trick set up is having a towline that does not exceed 164 ft under a pull-test of 4.41 lb, as specified in the FAI rules. The important thing to note is that there are no restrictions on towline length at greater tensions.

This small step that may result in a giant leap (literally) for the airplane is a projection to the logical extreme of present flying trends. For several years the Europeans have been catapulting their A-2's from the towline with various devices. The difference with the Banzai concept is only a matter of degree.

The history of 'Project Banzai' began some months ago when I studied tension release towhook designs, looking for the best combinations. In looking for ways to gain a few extra feet of altitude, I considered changing aircraft design to allow a more severe toss off the towline. Then that weird and wonderful thing that resides between my ears began to run amuck! A thorough reading of the rule book convinced me a super-stretchy towline launch was legal and possible. I talked over the possibilities with Frank Perkins and Dick Mathis. It was in a conversation with Dick that the project finally gelled.

Within a couple of days, a crude experimental ship was strapped together using a foam wing from my FAI power plane, a Starduster 350 (oz6330) stab, and what amounted to a pine log for the fuselage. Five flights were made with 15 lb tension on 16 strands of 3/16 contest rubber 15 feet long, with the best flight going over 120 ft high. Then, giving in to Fast Richard's coaxing from the side lines, I tried a full bore run (50 lb). Have you ever seen a goose hit by a 12 gauge at close range? The airplane began to explode immediately on launch. One wing did a beautiful pirouette around my head, pieces of stab were strained through wing spars like so much soup, while the fuselage convulsed into a perfect Lomecevak. I started crying softly, and after all the pieces were laid to rest (and the hysterical laughter from Fast Richard subsided), it became obvious that a stronger craft with more rubber should perform exceedingly well.

Planning on the 'Banzai Machine' com-menced - theory being at that point that a brick will fly three minutes if it has enough altitude; sinking speed would be traded for height. As all airplanes represent a design compromise, so does the Banzai Machine. The gliding ability is limited by the strength built in to survive the launch. The compromise point was reached in a practical way. Wing and fuselage length were limited by 48 in wood.

Using this method, I arrived at a 399 sia (square inches of area) projected wing and a 125 sia stab. A parabolic development was used for all the flying surface contours to add structural integrity. Airfoil selected was a 5% thick, 30% high point, flat back style. The flat back airfoil is the easiest to carve since it can be checked with a straight edge. The tail moment was kept short to make balance easier. For the same reason, the nose could belong to Jimmy Durante!

The number 1 airplane weighed 22 oz because I built in too much strength. This is a good time to remind you to select your wood carefully.

The wing was bolted to the fuselage and the stab glued on solidly. A word about these attachments -anything less than rigid mounting may allow movement of wing and stab at launch, resulting in a spectacular but short flight. The front wing bolt goes through the fuselage and threads into the towhook, thus transferring the launch load directly to the wing. The CG location was found to be critical and had to be moved rearward to prevent looping as power was increased.

Some Army surplus shock (Bungee) cord, thanks to Bernie's Hobby House, was used for the launch. The first days' flights really settled the issue. Performance was staggering, with 300 ft high climbs and I still hadn't learned how to trim it! Later tests indicated that enough rubber would punch the thing up to over 400 ft, with witnesses estimating a capability well over three minutes. That's when the Banzai Machine earned its name.

The shock cord used was 3/16 diameter and had an elongation of 300% at 30 lbs. The first flights were made on a single 100 ft strand, graduating to four strands at 25 ft. Incidentally, lengths are measured unstretched. More experimentation is the order of the day. It was also found that too much rubber cut the altitude due to its weight.

Work on the number 2 'Banzai' started with a swift run to M&P Enterprises' balsa emporium. Here I gleaned some superfast wood from a bin marked 'indoor wood'. All this while Fast Richard was occupied with my three year old son who had been trained to bite him on the ankle as a distraction.

The evil deed accomplished, I retired to my lair to build BM #2. This is basically the same airplane as #1, except for much thinner airfoils and lighter wood. The thin, 3-1/2% wing and stab airfoils also help to reduce weight to a respectable 14.7oz.

Select light straight grained wood for the fuselage. A 1/2 x 3 x 48 inch board weighing about 5 oz will be close. As a suggestion, purchase a small postage scale ($2-$4) and check its accuracy at the nearest drug or grocery store. Then take it with you when you shop for wood. (Hobby shop owners will love me for this.) For the wing wood, any width combination to get 3/8 x 12 x 48 in should weigh 12 oz. Use the same weight wood for the stab.

The first step is to laminate the boards together to form wing and stab blanks..." 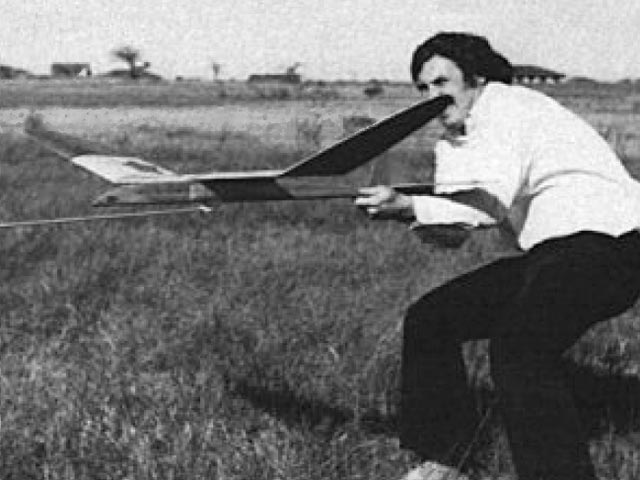