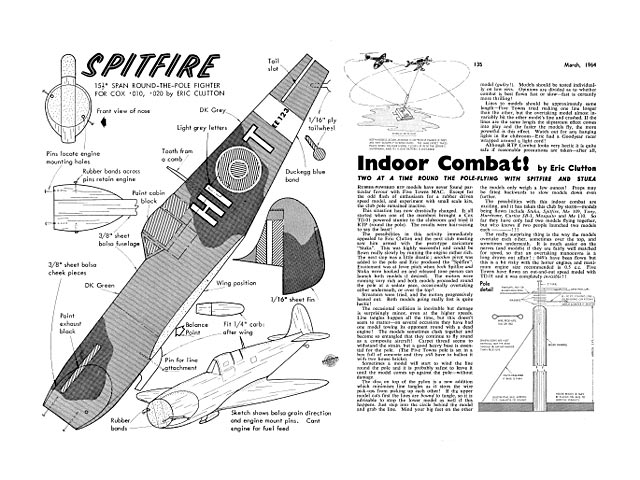 The RTP Spitfire and RTP Stuka (oz10605) both appeared in the same article titled 'Indoor Combat!' in Aeromodeller, March 1964.

Quote: "Indoor Combat! by Eric Clutton. Two at a time round the pole flying with Spitfire and Stuka.

Rubber-powered RTP models have never found particular favour with Five Towns MAC. Except for the odd flash of enthusiasm for a rubber driven speed model, and experiment with small scale kits, the club pole remained inactive.

This situation has now drastically changed. It all started when one of the members brought a Cox TD.01 powered stunter to the clubroom and tried it RTP (round the pole). The results were hair-raising to say the least!

The possibilities in this activity immediately appealed to Eric Clutton and the next club meeting saw him armed with the prototype caricature 'Stuka'. This was highly successful and could be flown really slowly by running the engine rather rich. The next step was a little drastic; another pivot was added to the pole and Eric produced the 'Spitfire'. Excitement was at fever pitch when both Spitfire and Stuka were hooked on and released (one person can launch both models if desired). The motors were running very rich and both models proceeded round the pole at a sedate pace, occasionally overtaking either underneath, or over the top!

Streamers were tried, and the motors progressively leaned out. Both models going really fast is quite hectic!

The occasional collision is inevitable but damage is surprisingly minor, even at the higher speeds. Line tangles happen all the time, but this doesn't seem to matter - on several occasions they have had one model towing its opponent round with a dead engine! The models sometimes clash together and become so entangled that they continue to fly round as a composite aircraft! Carpet thread seems to withstand the strain, but a good heavy base is essential for the pole. (The Five Towns pole is set in a box full of concrete and they still have to ballast it with two house bricks).

Sometimes a model will start to wind the line round the pole and it is probably safest to leave it until the model comes up against the pole - without damage. The disc on top of the pylon is a new addition which minimises line tangles as it stops the wire pick-ups from picking up each other! If the upper model cuts first the lines are bound to tangle, so it is advisable to stop the lower model as well if this happens. Just step into the circle behind the model and grab the line. Mind your big feet on the other model (guilty!). Models should be tested individually on low revs. Opinions are divided as to whether combat is best flown fast or slow - fast is certainly more thrilling!

Lines to models should be approximately same length - Five Towns tried making one line longer than the other, but the overtaking model almost invariably bit the other model's line and crashed. If the lines are the same length the slipstream effect comes into play and the faster the models fly, the more powerful is this effect. Watch out for any hanging lights in the clubroom - Eric had a Goodyear racer wrapped around a light cord!

Although RTP Combat looks very hectic it is quite safe if reasonable precautions are taken - after all, the models only weigh a few ounces. Props may be fitted backwards to slow models down even further. The possibilities with this indoor combat are exciting, and it has taken this club by storm - models being flown include Stuka, Spitfire, Me 109, Tony, Hurricane, Curtiss SB-1, Mosquito and Me 110. So far they have only had two models flying together, but who knows if two people launched two models each!

The really surprising thing is the way the models overtake each other, sometimes over the top, and sometimes underneath. It is much easier on the nerves (and models) if they are fairly well matched for speed, so that an overtaking manoeuvre is a long drawn out affair! 049's have been flown but this is a bit risky with the hotter engines and maximum engine size recommended is 0.5 cc. Five Towns have flown an out-and-out speed model with TD.01 and it was completely invisible!" 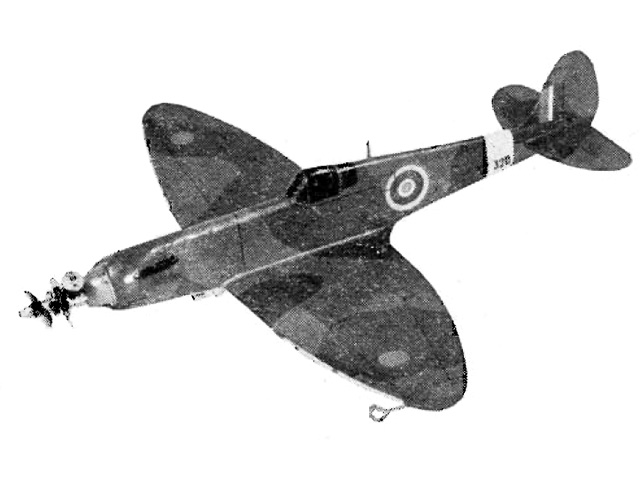 Looks like a page two of the spitfire plan is missing. No details for the wing or tail surfaces are on page 1 TIA.
anon - 10/11/2018
Spitfire is missing stabilizer & wing layouts.
anon - 11/11/2018
Doh. My mistake. Turns out DBHL have only this one page scanned, and I myself put this plan up on Oz without even noticing the missing wing. So. Can anyone out there send us in a scan of page 2? Thanks all.
SteveWMD - 13/11/2018
Add a comment