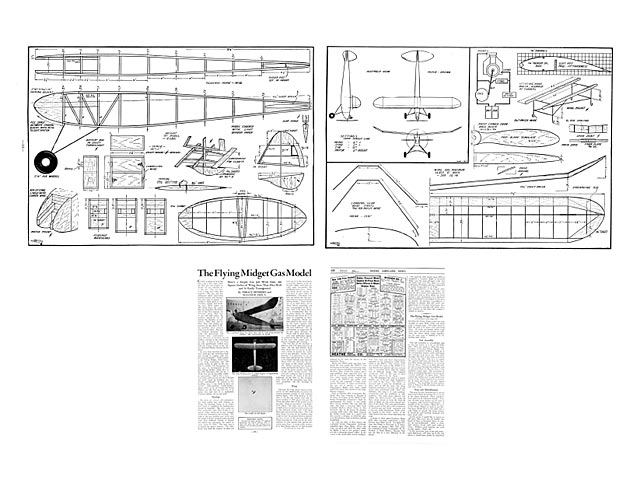 Quote: "Here's a Simple Gas Job With Only 300 Square Inches of Wing Area That Flies Well and Is Easily Transported. The Flying Midget Gas Model, by Thracy Petrides and Malcolm Abzug.

COME to think of it, it has been only a few years since the first gas job leaped, or should we say wheezed into the air. But we have come a long way since that moment. The gas job has undergone many interesting transformations and changes. The first type to appear resembled a light plane in construction, weight, and handling ease. We'd rather not talk about these, the sooner they are forgotten, the better. Out of this first attempt, the 'box-car' grew. This type of gas job still enjoys the greatest popularity of all among the majority of gas-jobbers. They find that its blunt lines and clumsy appearance do not affect its flying qualities, most contests being won by them. But just as airplane designers are using the monocoque and stressed skin construction more and more, so are many gas job builders turning to the streamlined gas job. A treat to the eye, these gas jobs significantly walked away with the Texaco Event at the last two National Meets - watch out for them !

An even later development is the very small gas job, sometimes built tiny enough to compete with rubber-powered models. Such a model is our Flying Midget, which boasts of a wing containing only 300 square inches in spite of the fact that it carries 1/5 horsepower in the nose. A development of the first Flying Midget, which flew at the 1936 Nationals, this job has a climb that can be described mildly as spectacular. Add to this a fast, level glide, and you can see why I thought the week spent in building her very wisely squandered! In regard to her handling ease, I can claim at least one record; (metropolitan model-builders please note); as far as I know, the Flying Midget was the first gas job ever to be taken into and out of a moderately crowded subway car as one unit!

Fuselage. The plans are almost self-explanatory, but some points may need clearing up. When the fuselage frame of 1/4 square hard balsa is completed, the landing gear should be installed. The wire struts are first accurately bent, then bound to 1/4 square strips, which are in turn strongly bound and cemented to the fuselage. The joint of the two landing gear struts near the wheel is firmly wrapped with annealed wire, then soldered, welded or brazed. Air wheels are important; the model always comes in 'fast.' The next step is to install the motor runners..."

Note this is not a full size plan, this is a scan of the magazine pages as originally printed, 1937.

Note: for a later (smaller) version of this design, see the Vic Smeed Flying Midget (oz6140) plan from Aeromodeller, which is still for FF but at half-size. 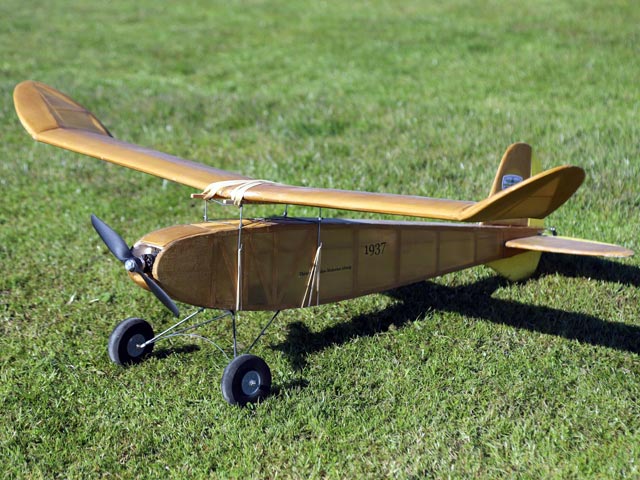 Dear Outerzone, Hereby a picture of my Flying Midget replica [main pic]. Mods: elektro Emax 2215/20, prop 8x6, 2.4RC, non thickened Gott 497, full D-box instead of half covering, adjustable pylon. Covering: silk, stains of dope gave it an unwillingly ''attick find' appearance. The suggested CG of 50% is unflyable. At CG 40% and adjusted angle of incedence its ok. Makes it an ok, docile and characteristic flyer. Bad (well, my bad): flew a tail of a happely cruising Thermalist at remaiden. Thank you for all the good work with Outerzone, Regards from The Netherlands,
Peter den Ouden - 02/06/2021
Forgot to mention: mine is RC but will fly FF of course.
Peter den Ouden - 06/06/2021
Add a comment