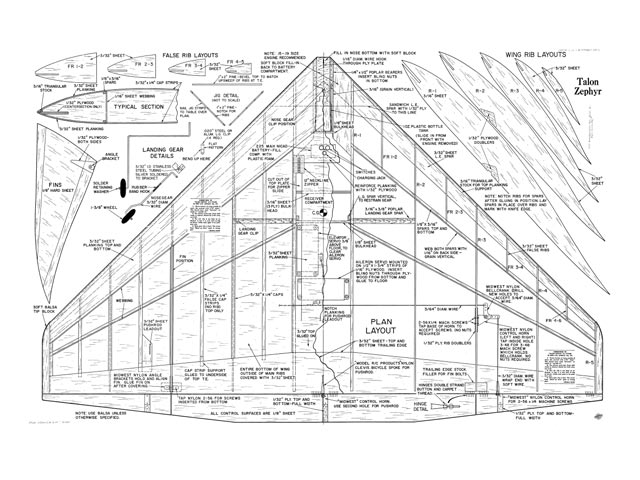 Quote: "Witnesses to 'Talon Zephyr' flights at the '62 Nats all agreed that it was the fastest ship entered in the Pylon event. The belief that the Delta configuration is best for speed was widely expressed. For the benefit of those who have expressed a desire to build a .15-size ship, the plans are presented herewith. Should you have no interest in pylon flying and want only a high performance aircraft, the Talon Zephyr will still meet your needs. The craft will climb out of sight vertically since thrust can exceed weight.

Bob and I had built many deltas before we began plans for our 1960 model. We had worked together in his basement for many an evening incorporating the best features our previous ships into the design.

Bob began construction immediately, but prior to completion of mine, I had heard of the new Tee Dee .15 and decided that this one would be built around that engine. Some delay ensued while I laid out plans for the little ship, but construction proved simple, and my craft was ready to fly before the Hustler (oz2873) was completed. Having used Talon zippers, at Bob's suggestion, I called it the 'Talon Special'. The Special was destined to a short life.

On the first flight excessive up trim resulted in too much altitude too fast. A prolonged dive to bring it back resulted in too much speed and the point at which vibration found the right aileron reed was soon reached. Surprisingly, the ship was not damaged beyond repair, but since construction is simple, I decided to build anew.

The phenomenal climb of Talon Special sparked a thought which was to be used in the new ship - VTO. Considerable weight can be saved by eliminating the landing gear. Talon Special tipped the scales at three pounds. I figured that without the gear, and with lighter equipment, the ship could be flown at 2 pounds even. The Special flew with three servos, one being used for elevator trim, but it was decided to use only two in the Zephyr.

The receiver posed a problem until the Toledo R/C conference in February '62. While there, I saw the New Haven Superhet 10 channel. Immediately on returning home I wrote Jack Fisher and explained my problem, emphasizing the fact that I was concerned about vibration. He assured me that there would be no troubles..."

Article is online at http://www.airplanesandrockets.com/airplanes/talon-zephyr-1963-annual-edition-am.htm

Note this is drawing is scan from the full size plan, at 400 dpi. This is not scaled up from the small magazine print. 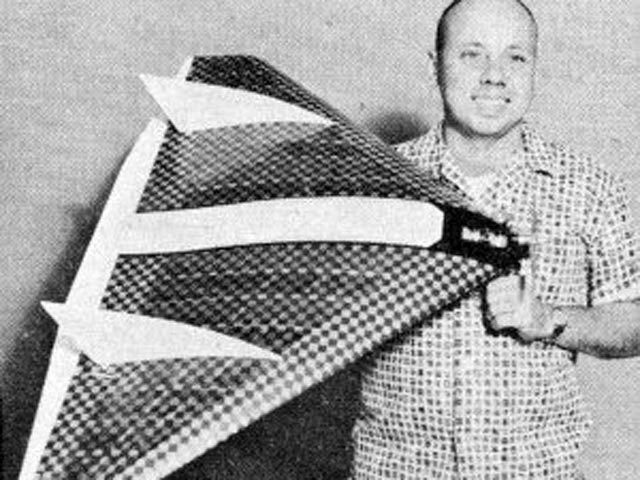