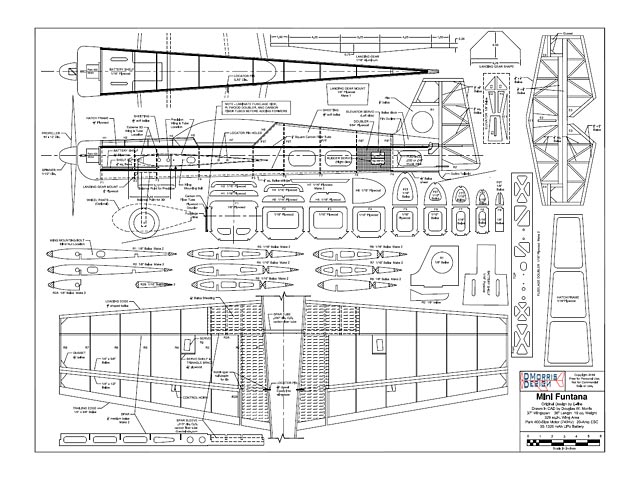 Quote: "The original Mini-Funtana was an ARF from E-flite, introduced in 2004. It was designed for Pattern aerobatics and featured a re-positionable wing that, when placed in the forward position, makes it suitable for flying extreme 3D maneuvers. It has been discontinued for many years and parts are unavailable. I acquired a much-bashed model that needed rehabbing. There are no plans available anywhere, so I carefully measured my example, looked at the pictures in the Assembly Manual, and looked at the damaged areas, and created plans in CAD. I have incorporated some reinforcing (thin plywood and carbon fiber)..."

Quote: "I see that my plans for this model have been added to your site. Great! I would like to post all of my plans at Outerzone.

There is a parts layout plan in PDF format and a .DXF drawing, which is a text-based file that is interchangeable amongst many CAD systems, and can be used with laser cutters. And there is a PDF of the original manual from E-flite that has setup tips and the control throws. They are attached.

Here is a picture of the original E-flite Mini Funtana.

And a note: The wing ribs shown on the Parts Layout Plan have been modified with a snap-off tab to support the ribs during construction. The wing has a unique design in that the rib thickness is a constant 1 in, meaning that the thickness of the rib increases (as a Percentage of the chord length) as the ribs get shorter due to the wing's tapered shape. Thanks."

Note the model pic currently shows an ARF Mini-Funtana, as that the closest image we have at the moment. When someone (hint hint, DaveH...) sends us a pic of a model completed from this plan, we'll use that.

Update: 03/11/2018: Replaced the parts layout PDF with revised version, thanks to DMorris.

Quote: "Then early version that did not have the snap-off tabs on the wing ribs and the fuselage sides would not be laser cut correctly when burn allowance was factored in, so I redrew that sheet using wider stock.

Also a suggestion: because of the carbon fiber reinforcement, it is possible that the receiver antenna could be 'blanked' by the CF. To minimize this, mount the receiver low in the plane on a scrap of 1/16 balsa mounted on the fuselage’s bottom stringers, then poke the antenna through the covering to point straight down. " 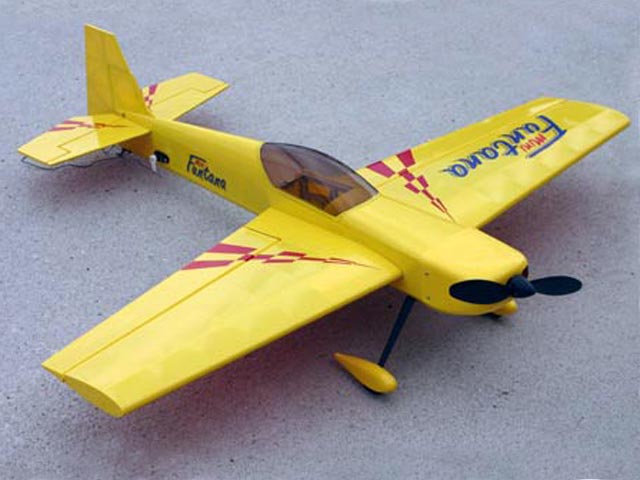 Excellent drawing!
rchopper56 - 01/11/2018
What an absolutely superb job, in every way! A joy to look at and work with. I'm fortunate enough to have easy access to a wide format printer and laser cutter. The plan is printing right now, the laser will be fired up shortly, and building will start today. Thank you all!
DaveH - 01/11/2018
Doh. I have now put the DXF file where it should be, inside that previously empty CAD zipfile. My mistake.
SteveWMD - 03/11/2018
Add a comment