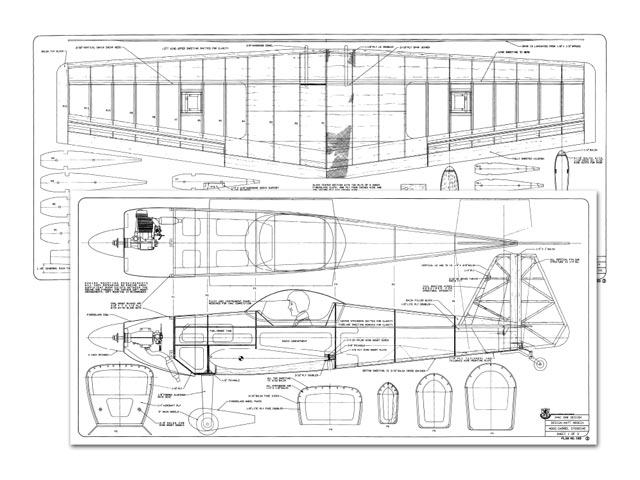 IMAC, following the lead of its full-scale counterpart, has developed a 1/3 scale model of the International Aerobatic Club's new One-Design acrobatic airplane. IMAC's mandate, as promulgated by its charter members, is to replicate full-scale aerobatics with R/C aircraft. The planes flown in IMAC competition are required to closely resemble aircraft that have been flown in full-scale competition. Minor deviations are allowed, eg a 10% variation in fuselage length, control surface area, etc and 20% reduction in fuselage height and width.

There are presently four classes of competition in IMAC: in ascending order of difficulty. Basic, Sportsman, Advanced, and Unlimited. The acrobatic sequences flown are virtually identical with the sequences of the corresponding full-scale classes. The new class, to be known as the One-Design class, will be added to the competition schedules as sufficient planes are built to justify a separate competition sequence. Meanwhile, the One-Design may be flown in any of the present classes.

The One-Design concept is an attempt to 'level the playing field' to standardize the aircraft so that the winner of the competition will be determined by flying skill rather than (to use an auto racing term) 'cubic dollars'. In MAC, the One-Design aircraft configuration must match exactly the plans herein reproduced, and the maximum engine dasplacement is established at 1.20 cubic inches. Type of construction, materials, and weight may vary; but exterior must follow the outlines shown on the official IMAC One-Design plans.

Matt Mrdeza was asked to build a scale model from the original plans of the IAC One-Design, to check the design parameters of the full-scale plane. He built a 1/3 scale model, working closely with Dan Rihn, designer of the IAC plane. The plane flew very well, with all moments and distribution of surfaces acting as had been predicted. A special acrobatic airfoil was designed for the plane, which also proved to be exactly what the designers had hoped for. Matt subsequently brought the model to the attention of IMAC and the design was reviewed with special attention to the modifications suggested by Matt after flying the scale model. lMAC suggested scaling up to a 72 in wingspan, narrowing the fuselage at the front by 20%, decreasing the fuselage height somewhat, lengthening the fuselage by 10%, and adding area to the vertical fin and rudder. These changes were incorporated into the plans, and the prototypes built to the modified specifications.

Three prototype planes have been built, the first a test-bed plane to check out the basic features of the design. and the second to serve as the construction model for this article. The third, built by Matt Mrdeza, was built from the plans but included a smoke system and a much larger engine. This model would not qualify for One-Design competition. but would qualify for any of the other four classes of 1MAC competition.

Construction is mostly built up balsa and plywood. The first step is to create a kit for yourself..." 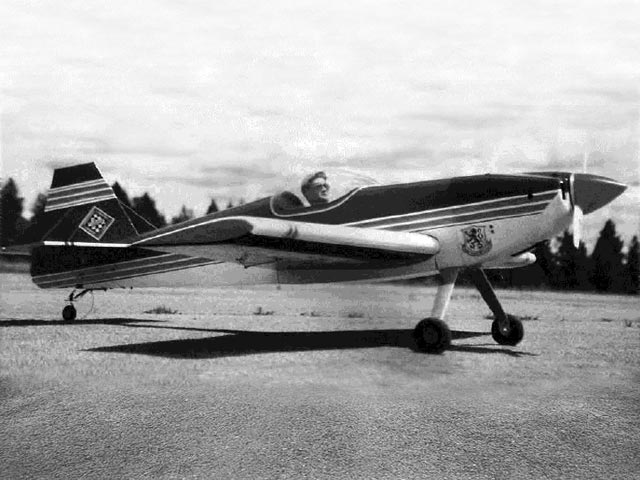