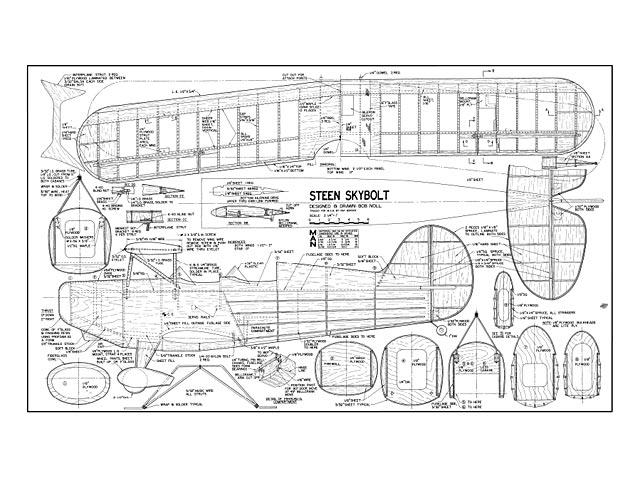 Quote: "Exciting scale development of the famous aerobatic hipe that has won every contest entered, including a Fourth at the 1976 Nats! Steen Skybolt, by Bob Noll.

Everyone likes biplanes, and I am no exception. Stay with me now and I will introduce you to a top performer and a good looker, the Steen Skybolt, an exact 2-1/4 in per foot copy of one of the most exciting homebuilt biplanes around.

Designed by LaMar Steen of Denver, Colorado, the Skybolt is a high perfor-mance aerobatic biplane. It can be found with either a 180 hp or 200 hp power plant and a gross flying weight of 1650 lb. The Skybolt is not factory produced, but rather is homebuilt using detailed construction drawings available from the designer.

First, let me explain how I came around to the idea of building my Skybolt. During the summer of 1974 considerable interest was developing in the sport biplane class of acrobatic competition. In the fall of that year, I decided that I would rebuild a 1960 Astro Bipe (oz4674) which I had had so much fun with during the early sixties, until it sustained some major damage due to inherent difficulties of the 'reed' system that I was flying at that time. The Astro Bipe was a .45 powered semi-scale Pitts special designed by Fred Dunn in 1959. As for the reeds, if you don't know what they are you're probably better off, and it won't show your age.

As most projects turn out, what was to be a simple rebuild began looking more and more like a total redesign in order to accommodate today's larger engines and improve general construction qualities. About this time I discovered that my heart was no longer in the project which was pushed to the back of the workbench.

Then it happened! I took a Sunday afternoon drive to Endicott's Tri Cities Airport to check the winter flying activities and a beautiful full-size red, white and blue biplane was sitting there glistening in the December sun. A closer inspection revealed that it was the magnificent 'Skybolt' that a friend and fellow modeler, Hale Wallace, had just completed after three years of work in his basement.

You guessed it, my sport biplane project changed instantly to a full-scale copy of Skybolt N1HW. It had everything I wanted from sleek design to eye-catching color scheme. Those who know me, know that red, white and blue airplanes with stars just turn me on as witnessed by my Yankee design (oz8766) that I have been flying in Pattern for several years. Who could possibly turn down the opportunity to copy a plane that is hangared at your local airport, especially when you can borrow the construction drawings that were used to build the real thing?

It wasn't long before the previously mentioned sport biplane project was moved from the back of the workbench to a not-so-safe place under the bench and a new sheet of drawing vellum was stretched out on the drawing board. Before I knew it, the model design began to develop using the set of official Skybolt construction drawings that Hale used to build his 'pride and joy.'

As the design progressed I found myself more involved in this project than in any previous one, and the idea of creating a full-scale model began to develop in my mind. Just imagine doing snap rolls, inverted spins, reverse spins and hammerheads all with a smoke trail and a parachute drop for added fun, with a plane that can win first place in sport scale as well. If you, too, are turned on by such things let me suggest the Skybolt for a very satisfying project and one which will make you the envy of many other modelers. Show me a modeler who doesn't get excited by a biplane and I'll show you a man who thinks Farrah Fawcett is a new kind of spigot.

Construction. Although the construction of the Skybolt is not as simple as that of a foam-winged monoplane, it is however very basic, but should not be attempted by an inexperienced builder. With this in mind, I will not give you a step-by-step construction sequence, but will highlight some of the different features used in this design. Oh, yes, the first thing you should do is purchase a set of full-size plans from MAN.

Wings. The wings are balsa built-up construction. You remember - ribs, spars, shear webs and cap strips. Of course foam wings could be built, but that would take away from some of the fun..." 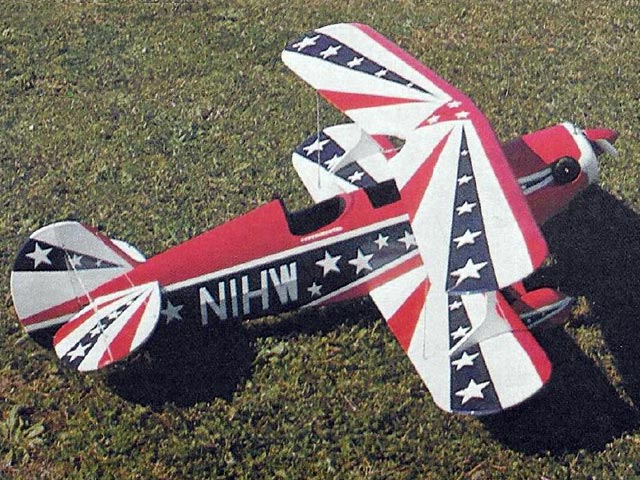 Hi Steve, Here is another photo [pic 007] to add to the several you already have posted about my Steen Skybolt oz10564. It was taken at Tri-Cities Airport in Endicott, NY where Hale Wallace built his full size Skybolt.
Bob Noll - 11/02/2021
Add a comment