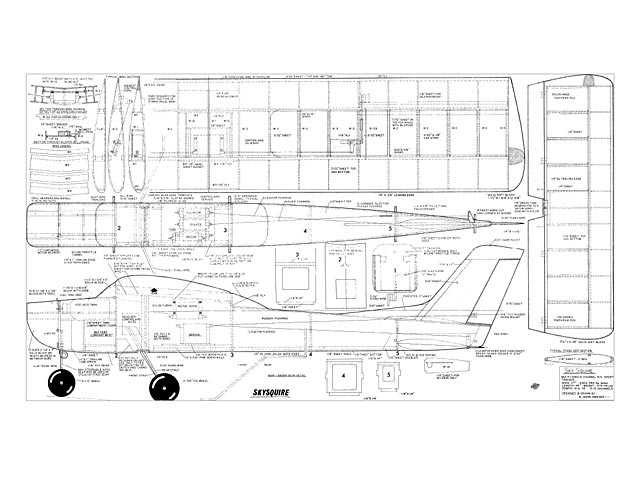 Note the Sky Squire was designed to allow a choice of 2 different wing sections. The plan shows all parts to build either a flat bottomed or a symmetrical section wing - with or without ailerons.

Note the Sky Squire was later kitted by Midwest. This here is the plan as it appeared when published in Grid Leaks.

Quote: "This magnificent multi-trainer takes anything up to 10 channels and .19 to .46 engines. Sky Squire, by R Jess Krieser.

YOU MIGHT SAY that the Sky Squire was designed by a beginner, for beginners - for when I designed it, I was a rank beginner at flying multi, and quite frustrated, to boot. I had been flying single channel, rudder only for several years. But when I started to learn to fly multi, I found a different set of circumstances with which to deal. After flying a number of designs, and going through a number of crashes, some of which were totally unrepairable, I concluded that if I was ever to become a skilled multi pilot, I just had to have a more stable, tame airplane to fly. And so, filled to overflowing with frustration, I sat down at my drawing board.

A good multi design, for training and sport flying, had to have three fundamental characteristics blended together:

1. It had to be stable. If you got into trouble, you ought to he able to throttle back the engine, and let the ship's inherent stability take it out of trouble, like a stable free-flight ship.

2. It had to have good performance - inherent stability as a trainer, but when you poured the coal to it, it should take on competition capabilities.

3. It had to be simple to build, and simple to repair. There's nothing as discouraging to a beginner multi pilot than a ship that takes an eternity to build and forever to repair.

To all of this I added a fourth feature - good looks, I felt that any ship combining these three features could also be given good lines that make it realistic looking - in flight, and at rest on the ground.

Putting these requirements together, I came up with a few fundamental specifications. Wing area should be around 600 square inches, to enable it to take the larger engines. Fuselage should be a box, which could be built fast by just putting sheet sides together with a couple of formers, and adding top and bottom sheeting. Tricycle gear was a must, as was a high wing, cabin configuration to give the necessary inherent stability. Stab would be stuck on the bottom of the fuselage, in the interest of fast assembly and simplicity. Both wing and stab would be of constant chord, again for simplicity and speed of construction.

I prefer to stay away from use of down-thrust if I can, so I set the thrust line at zero, wing at four degrees positive, and stab at 3-3/4 degrees positive. This gives the effect of downthrust without actually tilting the engine downward in its mount. By keeping the thrust line at zero, side thrust effects necessary can be attained with smaller settings. And, side thrust requirements would probably vary, depending on how much power was to be used.

Working with all of these specifications, my new ship began to take shape on my drawing hoard. I gave the fuselage simple, straight lines to facilitate fast construction, and simplify alignment of the fuselage when assembling it flat on the building board. I contoured the nose and windshield area, the cabin area behind the wing, and the fin and rudder to resemble the Cessna Skylane, since it is a beautiful, rakish looking airplane, suggesting at all times that it's poised ready to spring into instant flight. At this point, I had no name for the ship; that came later, almost by accident.

I originally planned to fly the ship on 6 channels, with a Veco .19 for power. I got carried away when installing the servos, and wound up with trim on the elevator, adding a bit of extra flying weight. I must have gotten carried away too on the tail moment arm, for when the ship was finished, with the Veco .19 in the nose, the tail sat firmly on the ground, with the nose wheel in the air. Oh, well, a little lead in the nose will fix that, I thought. But then when I started ballasting it, I found I would need over four ounces of lead, and where to put it? As I was contemplating pouring it into the back of the crankcase, l suddenly remembered something. I dove into one of the drawers in my workbench, pulled out a box with a brand-new Supertigre .40 in it, and stuck it on my scale. Eureka! It weighed enough that I could forget the lead!

So there I was, ready to fly my tame, stable new trainer, for beginners, with not much over 580 square inches of wing area, a wing loading of 22 ounces, and a .40 bomb in the nose for power. I got chicken! After getting the engine to idle right, turned the transmitter over to an expert for the test flying, putting it into the hands of Bob Baldwin. Bob took the ship off in a fast climb in a run of just a few feet, found the trim he wanted, checked rudder and elevator response, and decided we needed a little right thrust, a little more rudder and elevator throw. After making these adjustments, up it went again, and on the second flight, Bob rolled it over and was flying it all over the place, inverted, and with it's flat-bottom wing yet! Two more flights and Bob had pretty much wrung the ship out, doing everything in the book with it, and a few other things besides.

Two weeks and 30 flights later, I had flown the ship through a tree on takeoff, hit a telephone pole, landed in telephone wires, stalled and dove it into the ground on its nose three times, and landed it in a cornfield four times. All of this with only one small rip in the wing covering, and a few nicks in the nose. I was now a multi pilot! And 150 flights later I turned it over to my 13-year-old son to learn to fly on, and went to the Mark II version, which is pictured here.

The initial test flying took place late in the fall of 1964, but before good flying weather ended. I had become somewhat skilled at managing to fly multi on my own without getting into trouble. Bob became enthused about the ship as a good trainer and sport airplane, and Frank Garcher was looking for something new to kit for his Midwest Products Co. He looked over the ship and liked what he saw. And herein lies the story of how it got is name. It was originally patterned somewhat after the Cessna Skylane, and it would follow in the Midwest line on the heels of two very famous and classic R/C designs - the Esquire (oz384) and Tri-Squire (oz5667). So we took the 'Sky' from Skylane, added the 'Squire' from the other two, and there we were: The 'Sky Squire'. It was a name that came easily to mind and fit well into the Midwest line-age.

In the fall of '64, before good flying weather ended, Frank Garcher came out to the club lying field to see the Sky Squire perform, to fly it himself, to evaluate it as a kit possibility.

I set the elevator with just enough up trim so that I could make smooth turns on rudder only, and brought the ship down from high altitude, flew it around the field in a pattern approach, chopped the throttle on the downwind leg, brought it around in two gentle turns and lined it up on its final approach, all by using only the rudder. I then yelled to Big Frank: Look! No hands! - and held the transmitter out-stretched in my left hand, and let the ship come in and land itself, It touched down on the gear, bounced once about six inches, settled down again to roll to a stop, prop still ticking over.

I did the same thing again, but this time, when the ship was lined up on its final ap-proach. I turned off the transmitter, set it down on the ground, and folded my arms, while watching the ship land itself. It behaved just like before. That did it.

I got inquiries for the plans from around the Chicago area, and from out of state. By the time flying weather broke in the spring of '65, there were at least seven Sky Squires that I knew of, flying in three states, with good reports from all. One builder put a semi-symmetrical wing on it, made from foam, as he was short of building time. He also added ailerons.

I decided to make a few design changes, and emerged with the Mark II version. I shortened the tail moment arm by two inches, so that I wouldn't have CG problems with lighter weight engines. I also slimmed the fuselage about a half-inch through the cabin height, mainly to permit standard sizes of sheet balsa, and worked out a wing with a 2415 section, and with ailerons. Thus, we had a ship that could go from rudder-only to ten channels, be flown with or without ailerons, and with either a flat-bottomed wing, or a semi-symmetrical section.

My second ship was initially flown with the Veco .19 in it, mainly to see how it would handle on .19 power. It flew very well, differing little from the larger engine, except the takeoff rolls were a bit longer, and you couldn't pull the nose up quite as steeply after takeoff. After about 20 flights, I changed to an OS 5-35 R/C, which gave it almost the power and speed of the Supertigre .40. The third ship off the building boards carries ailerons, and a .46 for power...

Article, thanks to RFJ.
Review. 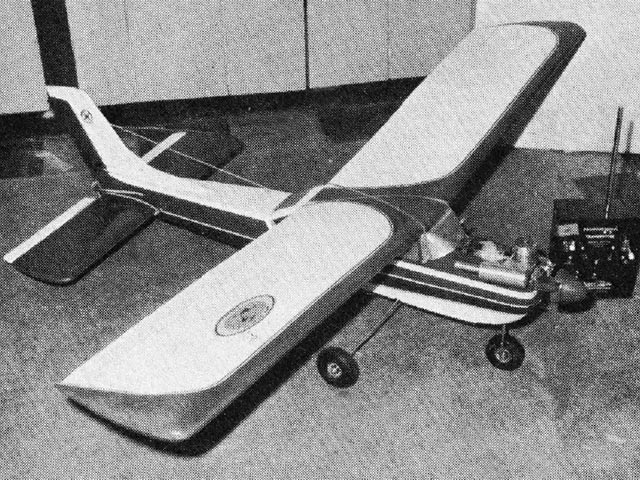