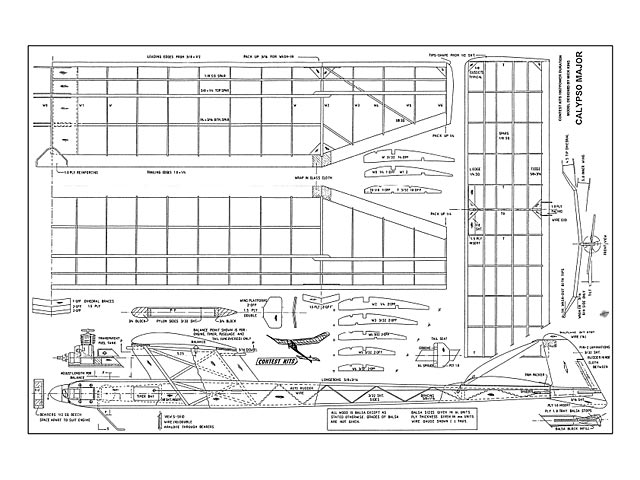 Contest Kits Calypso Major. Free flight power model. Originally released in 1957, this here is a later reprint of the plan in a nostalgia article from AMI, October 2001.

Each model belongs to its era and we need to define this in order to understand the relevance of the particular model. The development of competition power models follows closely the development of engines themselves and for a few years in the late 1950's and early 1960's the Oliver Tiger engine reigned supreme for FAI power duration models in the UK. Abroad, the K & B Torpedo 15, the MVS 2.5 cc diesel and other engines were highly rated. Free flight power models to the FAI specification powered by these engines, were designed for a fast steep open spiral climb. They needed the stability to naturally adjust to the glide trim, with no more than auto-rudder control.

It was into this field that the Calypso Major was launched by Contest Kits in 1957. It was claimed to have a performance of 6 minutes from a 20 seconds motor run. Remember, this was before the availability of more powerful engines, like the Super Tigre G 20S and others which initiated the widespread use of variable incidence tail (VIT) systems, to decouple the power and glide trims for the first time.

Mick King's company, Contest Kits of Leigh-on-Sea, Essex, had become well established in three years since its inception, with a reputation for competitive free-flight models, a quality strangely lacking in some of its competitors. One of the more popular rivals was Mercury with the Mallard (oz9749) designed by Henry J Nicolls, many examples being seen at competitions. Keil Kraft's Slicker (oz8877) range, by Bill Dean, had possibly become non-competitive by this time. Mick King had seen this potential opening and turned his attention to power duration designs. His entry level model, the 50 in span Calypso, powered by the new and powerful AM 10 diesel was already an acclaimed success.

Contest Kits expanded significantly in 1957, introducing the Empress A2 glider, the Stunt King, Voodoo (oz5232) team racer and several smaller designs. The company opened a shop in Leigh-on-Sea to offer direct sales and a mail order business. Mick King was fiercely competitive and, having already represented the UK in 1952 in the A2 class, he wanted to succeed in FAI power duration. The shop ordered a large batch of Oliver Tigers and we awaited their arrival for weeks. The prototype was flying in early 1957, achieving an early success in winning the East Anglian Area Winter Rally. The 64 in span Calypso Major was launched into the kit market selling at £1.15.0, with a favourable review in Model Aircraft of July 1957.

The Calypso Major was very much in the Contest Kits style. It was a simple and straightforward design based on well-established principles, taking about 20 to 30 hours to build. The structure was light and with an appropriate motor, it was a competitive open class power model,while with a little ballast, it suited FAI competitions also. It could handle the Amco 3.5 cc diesel, and powerful glo motors in the 0.15 cu in class. To achieve some recognisable individual style, the swept forward fin was mounted behind the tailplane, with an equally raked pylon shape. Mick King's models had white doped fuselages with red tissue covered wings and tail planes.

After starting the Oliver Tiger engine, it would take a few moments to warm up and come on song. This gave an opportunity to set the D/T fuse, check the timer and assess the local wind direction. Then a steep release sent the Calypso Major away in a searing right hand spiral with a vapour trail marking its flight path. With ears ringing, one awaited the timekeeper's confirmation that the flight was 'official' before grabbing the binoculars and sprinting off in pursuit.

The Contest Kits company was sold to Keil Kraft in 1958 and KK no longer chose to produce the kit alongside their own designs, so the life of Calypso Major was cut short. On the competition field other models were moving forward, including the ubiquitous Dixielander (oz3603) by George Fuller, from Yeoman Kits. VIT models were beginning to win the competitions, such as George French's Night Train..." 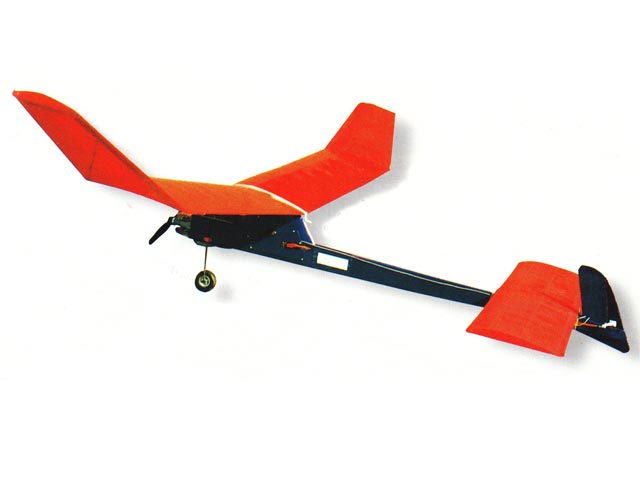