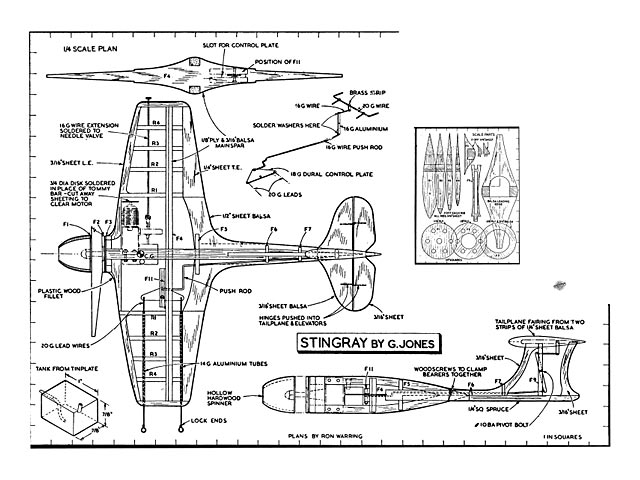 Quote: "Stingray is an 'out of the rut' model which has many features to interest control line speed fans. It is essentially a practical design - the prototype being evolved by eye, step by step, without a plan, as the designer describes in this article. The 68-70 mph achieved with a Mills Mark I is pretty fast and ample confirmation of Mr Jones's method of working.

THE Stingray was built because I felt the usual modeller's urge to build something different, and, as I had got the idea of C/L pretty well pinned down and had already built five or six controliners including stunt, scale and the usual 'knockabout' models, I felt something new was called for. Now I know that a sidewinder is nothing new, but the general aim was to cut the frontal area down to a minimum and still preserve a fairly decent appearance.

The model started life as two lengths of hardwood bearer bolted to a Mk. I Mills. As the model was to be a 'side-winder' the bottom bearer was in a position to take all the hard bumps and scraping, so it was decided to utilise a dolly take off. Now the idea started to form that this layout had possibilities as a speed design. As already stated, the engine was on its side so it was decided to enclose the cylinder head inside the mainplane. A former was cut from ply and with much cutting and sanding, made to fit between the bearers behind the engine.

An identical former was cut from balsa sheet and cemented into place also. This gave me something to cement the next of the bits to as I went along and showed me just how much the frontal area could be cut down. By judicious use of a rasp, this former was further reduced in size until, upon holding the framework and looking from the front. the former outline stood proud of the Mills outline by about one six-teenth. This cleaned up the front view and, after trimming the ends of this former until the required span was arrived at, I turned my attention to the side view.

The two rear ends of the bearer were now cut to the length required and chamfered so that they could be steamed and cemented at the ends. The next consideration was the rear half of the fuselage. For this I required something small in section, yet strong enough to take a fair amount of punishment when the model was set down roughly. I used two pieces of quarter square spruce which were cemented into place beneath the near end of the bearers. That was about all the weight I could afford back there as the engine was practically on the CG so I had to step carefully. The fin I decided should suppot t the tailplane as this would get it well clear of the ground and also allow it undisturbed air in which to operate..." 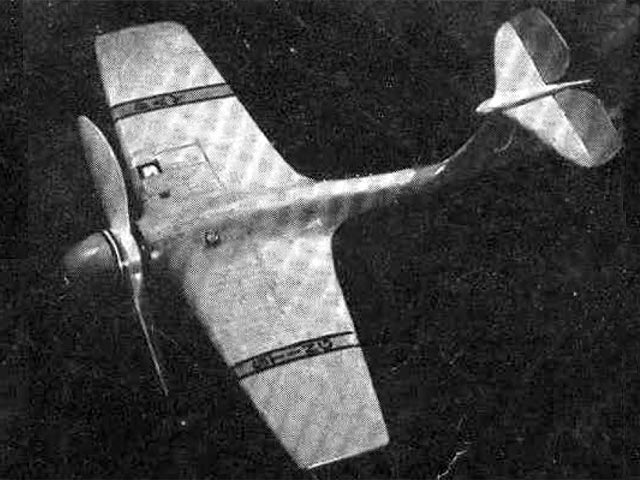