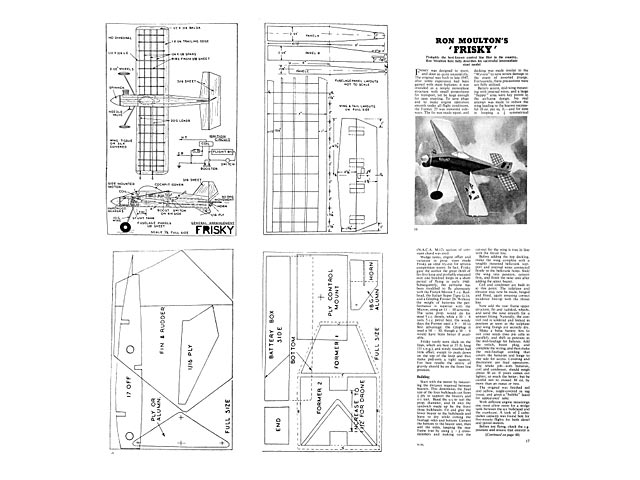 FRISKY was designed to stunt, and does so quite successfully. The original was built in late 1947, after some experience had been gained with stunt biplanes; it was intended as a simple monoplane structure with small proportions for transport, yet be large enough for easy stunting. To save plugs and to make engine operation smooth under all flight conditions, the Forster 29 was mounted sideways. The fin was made squat, and decking was made similar to the 'Wyvern' to save severe damage in the event of inverted prangs. Fortunately, these precautions were not fully utilized.

Battery access, mid-wing mount-ing with internal wires, and a large 'flapper' area were key points in the airframe design. No real attempt was made to reduce the wing loading to the known successful 10 oz per sq ft - and for ease in looping a 3/4 symmetrical (NACA M.12) section of constant chord was used.

Wedge tanks, engine offset and variation in prop sizes made Frisky an ideal try-out for serious competition stunts. In fact, Frisky gave the author the great thrill of his first loop and probably executed over one hundred loops in a short period of flying in early 1948. Subsequently, the airframe has been modified to fly alternately with the French Micron 5 cc Redhead, the Italian Super Tigre G.14, and a Gloplug Forster 29. Without the weight of batteries the performance is superior with the Micron, using an 11 x 10 airscrew. The same prop would do for most 5 cc diesels, while a 10 x 8 suits 5 cc petrol best. On windy days the Forster used a 9 x 10 to best advantage. On Gloplug it used a 10 x 10, though a 10 x 8 would have been better if available.

Frisky rarely went slack on the lines, which are best at 55 ft long (33 swg), and windy weather had little effect, except to push down on the top of the loop and thus make pull-outs a tight squeeze. For best results the centre of gravity should be on the front line position.

Building. Start with the motor by measur-ing the distance required between bearers. This determines the final size of the four bulkheads cut from 1/8 ply to support the bearers and u/c unit. Bend the u/c to suit the prop diameter, and fit into the sandwich made up by the front three bulkheads. Fit and glue the lower bearer to the bulkheads and leave to dry while cutting the fuselage sides and bottom..."

Note this is not a full size plan. Only the formers are shown at full size. 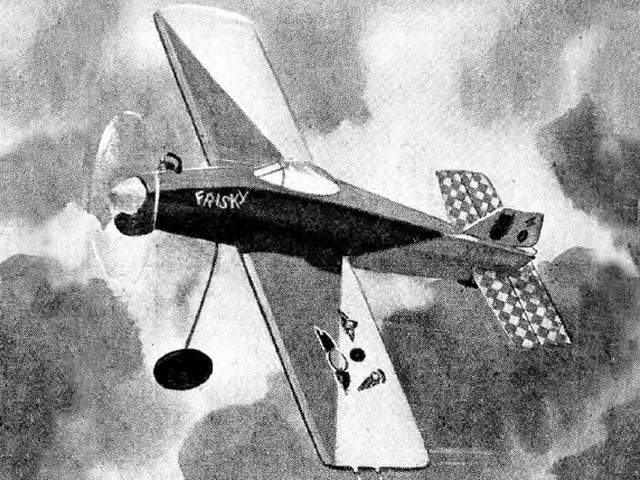