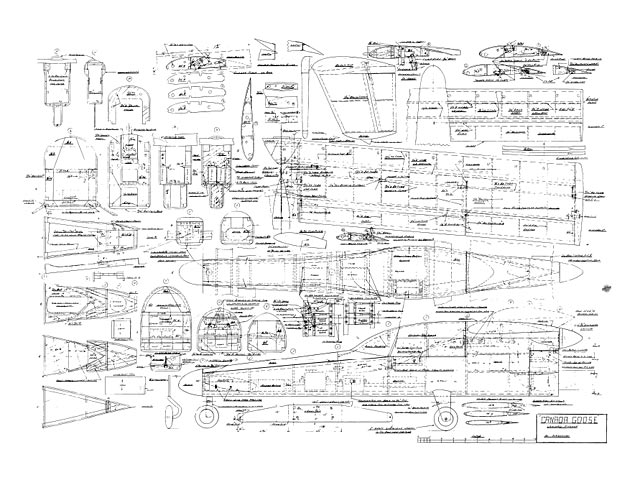 Quote: "Although it may be somewhat 'backward,' our feature aircraft shows some 'forward' thinking. Something a bit different for your amazement and amusement! Canada Goose, by AG Lennon

Modern R/C equipment can provide miniature aircraft with all the flying capabilities of their big brothers. It is now possible to design, build and fly small prototypes of your 'dream ship' that are limited only by your imagination. The flying field becomes both a wind tunnel and a flight test area; while crashes do occur, no lives are lost. This canard-pusher, or tandem wing biplane, is an example of just such a miniature aircraft.

The basic configuration of this model was conceived in 1972. During the following year seven balsa gliders of about 18 in span were designed and built to explore the characteristics of canards. The best features were selected and combined into one design, and detail drawings were prepared; the Canada Goose first flew in 1974.

Several crashes later, and after considerable rebuilding, it became evident that there was serious longitudinal instability when the model performed even a gentle zoom. In level flight, gliding or climbing, it performed well. A mild zoom, following a flare during a landing approach, resulted in an uncontrollable, shallow dive toward the runway - bad for both the model and the designer's ego. At that point my fellow Montreal R/C Club members were heard to mutter words such as 'Ruptured Duck.'

I was discouraged and frustrated, but persistence finally paid off and the prob-lem was solved. The original forward wing section (NACA 2415) arrived at 'zero lift' angle of attack as the nose dropped in a shallow dive. The main wing section, however, continued to lift, causing this dangerous characteristic. While pitch control could bring the model to level flight, some 25 feet of altitude was lost, and just wasn't there on the landing approach.

The forward wing was redesigned, using the same section as the main wing (NACA 4415). Its area was reduced both because of the higher lift coefficient of this section and because it was set at 3-1/2° angle of incidence versus the former 3°.

Further flight testing proved that the longitudinal instability was at last corrected. The model exhibited no undesirable characteristics, and flew very well indeed.

In 1976 a pilot error (mine) resulted in a 180° roll 10 feet above the ground, followed by a crash that required a new fuselage and forward wing to undo.

Subsequent flights indicated a mild dutch roll at high angles of attack and slow speed on the landing approach. Two fac-tors were responsible. There was too much dihedral on both the main wing (7°) and forward wing. (6°); this has been corrected in the drawings. Also, the two wing dihedrals were not aligned - the forward wing, when viewed from the front, was slightly out of skew with the rear wing. The dihedrals were, in effect, fighting one another; hence the mild dutch roll. The Goose is still in one piece and last flew in 1978.

During all this test flying, the model was plagued by frequent in-flight, inverted-engine quits at low rpm, leading to forced and sometimes damaging landings. This was overcome by the on-board battery installation; using tank pressurization via a muffler tap was a further improvement.

Design. The canard configuration has major advantages. The forward wing at higher angle of attack than the main wing will stall first, and thus prevent the main wing from stalling. Stall spins, a major cause of fatal lightplane crashes, are extremely unlikley. Also, both wings contribute to overall lift..." 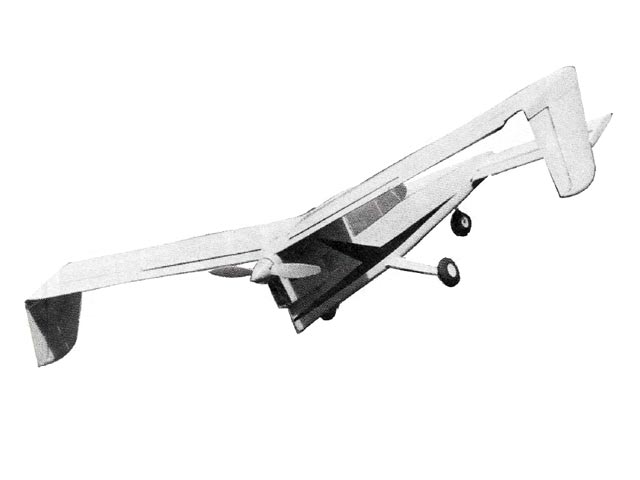