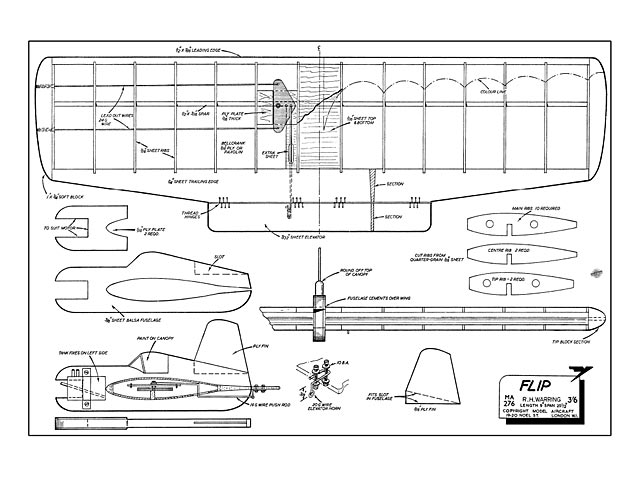 Quote: "Designed as the ideal model for a stunt or combat beginner. Flipper, by Ron Warring.

THIS model was designed for quick, rugged construction, but at the same time it had to be fully acrobatic on 0.8 cc motors. It is a very lively model with instant response to control movement, but is easy enough to pilot once you have learnt not to over-control. On 25 ft lines it is capable of performing the whole range of standard manoeuvres, including tight overhead circles and eights.

Toughness is ensured by using a thick balsa profile fuselage with ply plates each side at the nose. These plates extend well back beyond the wing leading edge, the extra strength saving the fuselage from breaking of short in a crash landing under full power. If the fuselage does break, it will do so at the end of the ply plates, which leaves ample area for cementing back so that it is as strong as before.

The wing is built by cutting a set of ribs as shown on the plan, pinning down the mainspar (medium light balsa) and assembling the ribs on the spar. Leading and trailing edges are slotted and cemented in place to complete the assembly. Remove from the plan when set and cover the centre section with 1/16 in sheet. Add the tip blocks and carve and sand to section when shaping the leading and trailing edges to section. The latter is cut from 1/4 in sheet and may be shaped to section before assembly, if preferred.

The bellcrank (2 in between lead-out wires) is mounted on a 1/16 in ply plate cut to it between the ribs. Mount on a countersunk 6 BA screw, pulling the screw head down flush with the underside of the ply, and then cement in the wing with the pivot point located over the mainspar.

The elevators are attached to the trailing edge with thread hinges, sewn in place with the aid of a needle. Bend the elevator horn and secure with to B.A. screws, washers and nuts, as shown in the detail sketch. The push rod can than, be bent from 16 SWG wire to fit. Before locating in the control horn, cut an extra strip of 1/16 in sheet for the bottom of the wing, slot to allow for push rod movement, slip over the rod and cement to the wing.

Attach the lead-out wires, which should he 20 or 22 S.W.G. wire, to pass through aluminium tubes pushed into the left wing tip. Check for freedom of control movement and install a 1/2 oz counterweight in the outside tip. Then smooth off the wing, as necessary, and cover with heavy Modelspan. Yellow tissue was used on the original, sprayed with four coats of clear dope lightly tinted with colour (yellow) dope. This gives a much denser and permanent colour without adding much extra weight.

The fuselage is simply a profile shape cut from 3/8 in thick balsa sheet. Cut an extra rib for marking out and checking the cut-out. The fuselage should slip easily over the finished, covered wing and is cemented permanently to the centre..." 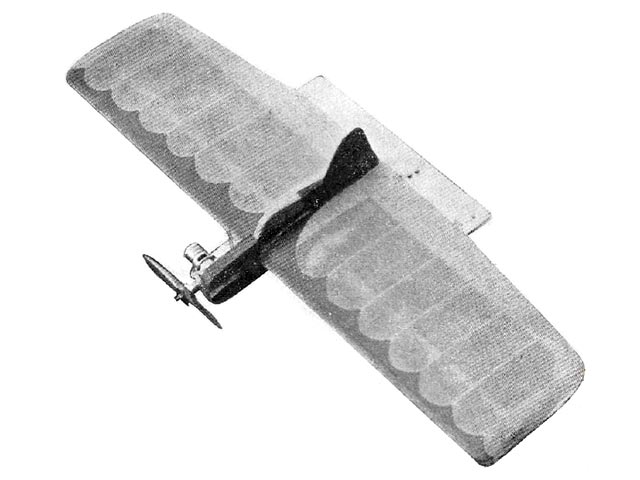