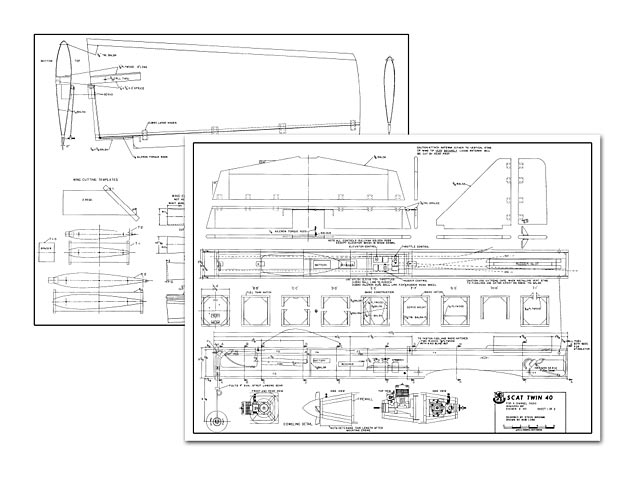 Quote: "If you want the awesome twin engine performance without the dead engine problems, this is the one for you! Scat Twin 40, by Steve Broome.

Have you ever wanted to fly a twin engine airplane, but just couldn't stand the thought of building a complicated twin nacelled airplane and then see it spin into the ground with one dead engine? Neither could I. That's why I designed a twin push/pull canard that I call Scat Twin 40. After some teething pains, there is finally an easy to build twin that will just slow down if you lose one engine. Scat Twin is also a joy to fly. After about ten seconds of flying, you,.won't think it is flying backwards either. I tell first time canard fliers to just think of it as a missile or a delta winged airplane.

Scat Twin was designed to be very simple to build, and yet sturdy enough to stay together with engines as powerful as 0.S. .46 SF ABC's trying to twist each end off. With the exception of the wing saddle, every piece of wood will be cut in straight lines, too. All of the building materials and hardware, with the exception of engines and radio, came from Balsa USA. I have always used Balsa USA for my wood and supplies, and have always been pleased with the quality of wood, and their service has been excellent. If you can build any of the various stik models on the market today, you can easily build Scat Twin. The 3/4 in triangle balsa in the fuselage allows for generous sanding, and along with the large canopy it doesn't look much like a stik. Even though vying bolts work fine and look good, for simplicity, this particular airplane uses rubber bands to hold the wing.

There are three things that you should never forget about the Scat Twin.

(2) Canards exert extra stress on vertical stabs. A canard, less its vertical stab, will flutter earthward like a falling maple leaf and, unfortunately, they always seem to get torn up! I have seen that happen three times! So, have a vertical stabilizer gluing party like I do so you will be sure to use enough epoxy to keep the stab in.

(3) Securely attach the radio antenna to either the vertical stab or the wingtip. If it comes loose in flight, your antenna will be shortened by the length that goes through the rear prop. Abide by these three rules and you will really enjoy Scat Twin.

Scat Twin has absolutely no asymmetrical thrust problems when one engine dies. I honestly cannot tell which engine is dead until it comes close enough to see the propellers. It has plenty of power to execute a downwind turn on one engine and then make a perfect landing. It will also take off on one engine easily.

If this airplane didn't fly and look so good, I would have become too discouraged to perfect it after all the bad luck with the early prototypes (maybe you can avoid some of my mistakes). Before I describe the initial failures, remember that they all flew well. I also had never seen a canard fly before (still haven't except for mine), and I had to experiment on the CG position until I acquired a computer program to do that.

#1 was a .40 sized twin pusher canard. (It was a stand way-off scale Beechcraft Starship.) The radio failed after about five minutes of the first flight. Destroyed!

#2 was a .20 sized push/pull canard. It lasted longer than most of the early ones. The vertical stab came off during a dogfight with a Midwest Twin Stik. We lost!

#3 was a .40 sized push/pull canard. (I have since settled on this size and design.) The vertical stab came off on its second flight. Destroyed! This one crashed before #2 so I marked it up to bad luck on the stab. But, when #2 lost its stab, I redesigned it with ply and triangular balsa braces inside the fuselage. This has solved the vertical stab problem.

#4 had all the bugs worked out so I really made it look pretty. Sorry! The radio failed on the second flight and it met the same fate as did #1. Destroyed!

This was when I switched to Futaba FG radios..." 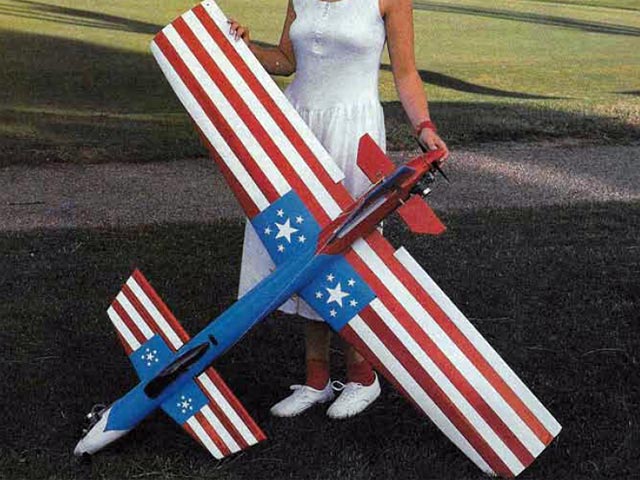