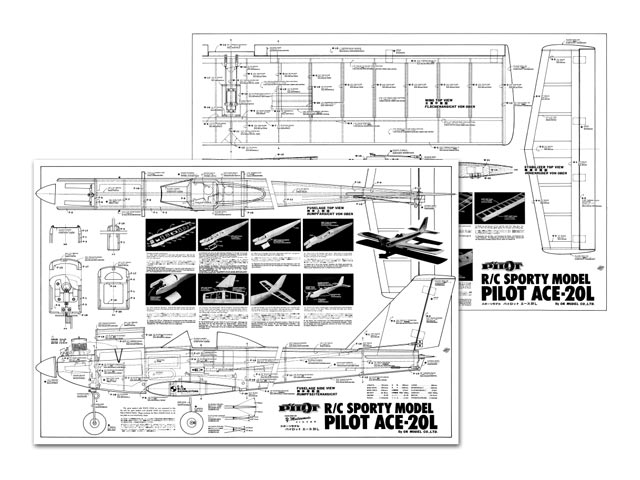 Quote: "Hello Steve and Mary, I got these plans from a club member, and I just had them scanned at the local copyshop to contribute to the best scratch build resource on the whole web :) ...keep up the good work! Julian"

For .20 to 20 cu.in. engines and four function radio, this ideal low wing trainer is reviewed by GRAHAM MOUNTFORD.

Having been flying models for a few years now, I have become very staid in my approach to modelling. This conservative attitude is not restricted to just me, for the large majority of model flyers do seem to fall in this category, having learned to fly competently, we stop progressing and stick with a high wing easy to fly aileron model which is likely to fall apart from use rather than from accidents. The extroverted part of me always wanted to fly a low winger with confidence but the cautious part always swayed the final decision. Knowing this, R/C Model World thought I would be an ideal person to review the Pilot Ace-20L and give a true picture of the model's claimed purpose.

The price tag on the kit is very reasonable, when you consider that it is produced to Pilot's usual renowned quality. On opening the box I was confronted with a nicely packed array of balsa strips, blocks, sheeting, etc and sealed bags of goodies, making one wonder how on earth can so much be crammed into such a small volume. So, prepared for the apparent quantity of wood increasing during the build, I used the box lid for a second part tray.

Fuselage: This is a simple affair consisting of balsa side panels interlinked using plywood formers, I deviated from my normal practice of using PVA, epoxy, six inch nails, etc, and used cyanoacrylate for 90% of the assembly. This quickened the already fast building time and I had the fuselage assembly finished ready for sanding in around four hours. The only problem encountered is an academic one in that the part recognition drawings are printed on the reverse side of the plan, so if you are constructing the model over the plan identify the parts before assembly.

Wings: These are straightforward with balsa ribs and spruce spars with sheet and webs to form a leading edge. Exposed ribs are capped in 1/4 x 1/16 balsa and reinforced at the centre section. This assembly takes around five hours to complete.

A few vacuum formed ABS finishers are supplied; cockpit area and wing, tail plane and fin tips. These were trimmed and fitted to check profile at the preocvering stage. Engine and radio were checked for fit, and the engine bay required a little trimming to accept the exhaust and needle valve on my OS 25.

Radio installation: I did find the servos on my Futaba 33M to be too deep around the cockpit base to fit into the servo tray. Luckily I had Futaba FD26 servos which fitted. Care has to be taken not to foul the throttle and nose steering linkages with the aileron connections. The nose leg required trimming at the top to eliminate the danger of cutting into the fuel pipe. When sanded down, the complete airframe was covered in solar-film as instructed and trimmed with film using solarfilm solvent. When covered the engine, tips, radio etc were reassembled into the finished airframe and control surfaces movement set up as per plan.

Acid test: The day chose me instead of me choosing the day and it was windy. The reason for this was simple. I was not going to test fly it but my stand in, namely Roy Garner, could only make that evening to test fly it. He had a poor excuse, 'I must take my family away for a holiday.'

The OS 25 was new and was running extremely rich for the first flight, but the nod was given and I hand launched my creation into the - hopefully not wild - blue yonder. (Reason for hand launch, the grass was too long.) My heart stopped as the Ace dropped down to within six inches of the deck, then slowly but surely started to climb. Roy's first comment was that the ailerons were soggy and required more throw. (Mind you, he flies a Panic.)

Everything else seemed to be very good, considering anunpeakedengine and gusty winds. After two circuits of the field, Roy started passing for the camera, included inverted. Pictures taken, it was my turn and my heart was in my mouth, you know what I mean. I endorsed Roy's comment on the aileron throw, for the roll was very slow.

Since then I have had more time fly-ing the Ace (I had to, Roy was away). With increased aileron throw, a run-in engine and no gusty winds, I find the model a joy to fly. At last I have brought the extravagent side of me out and I am looking forward to the next World Championships!

The Pilot Ace-20L is available from Irvine Stockists and the price is £35.25." 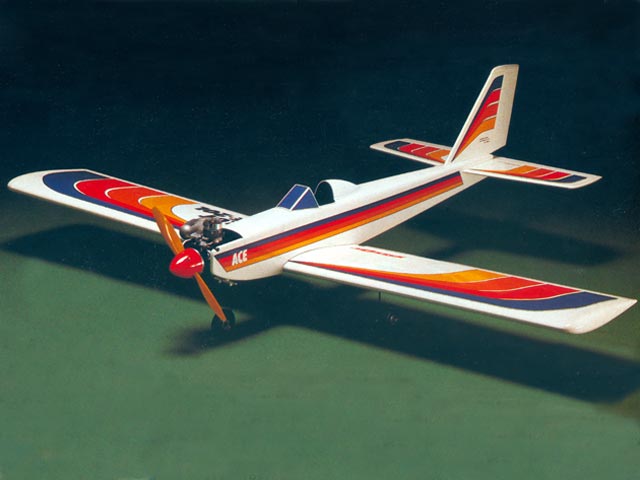