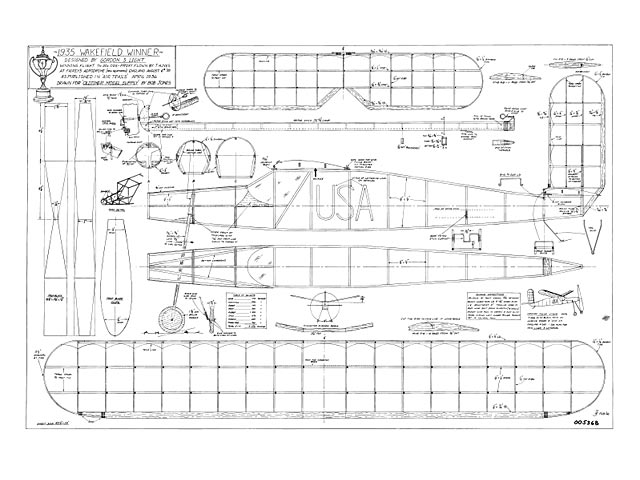 Quote: "IN presenting this month my 1935 Wakefield Winner, permit me first to give recognition to a high-stepping, patriotic cow that had much to do with the winning of the coveted Wakefield Trophy for the United States. Not that 'Bossy' helped to build or fly the model, to be sure, but there was a time she held its fate in her hands - or, rather, her hoofs.

It was the day before I packed up my model and shipped it to England. I decided to give the plane one last workout, and after an excellent flight it glided into a pasture in the midst of a herd of cows. No sooner had the ship touched the ground than the inquisitive creatures began giving it a thorough inspection.

Perhaps they wanted to check the wing and tail settings, or discuss the value of the wing section I was using. Anyway, during this procedure I was biding my time at a safe distance, fearful that if I frightened the herd the model would surely be crushed. But when two of the cows, attracted by small American flags pasted to the model, began to lick the fuselage, I lost patience and walked toward them. And that was when Bossy assumed the featured role in our drama. She did not see me until I was within a few feet of her, and when she began a hasty retreat the model was directly in her path.

But Bossy rose to the occasion. Perhaps she, too, wanted to do her part to help the United States regain the Wakefield. Anyway, she hurdled the model, the breeze stirred up by her flying hoofs gently rocking the plane as she scampered away. And thus, through Bossy's indulgence, the model went on to England to become the first plane ever to win the Wakefield Trophy when flown by proxy.

This trophy, which is 26 inches high, is to model airplane building what the Davis Cup is to tennis. Both are fought for internationally - France, Great Britain, and the United States being the principal contenders in both cases. Lord Wakefield of Hythe put this cup into competition in 1927, and since then four British and two American model builders have won the trophy.

The 1935 contest was held in England. Lack of funds compelled the six United States entrants to ship their models across the ocean to be flown by English boys since they, themselves, could not afford to make the trip. The 1935 contest was truly international - France, Great Britain, Australia, New Zealand, and the United States each being represented by a team of six.

Simplicity in building and flying is one feature of the 1935 Wakefield ship which will please you. TH Ives, the British modeler who flew the model, wrote to me as follows - It is simply amazing that a model could be constructed which would weather an Atlantic crossing in a ship's hold and fly straight out of the box, so to speak. I was handed the box about 3:30 pm, and had very little time in which to read your instructions, assemble the bus and test it. However, I found in the first test (with about 100 turns in) that it was in perfect trim. To make sure, I had another flight with about 200 turns and one off the board with 400. Each of these flights showed that no adjustment was necessary, so I left it at that. In the competition proper I put in 600 turns for the first flight, as I was confident of a good duration and did not want to strain the motor unduly. To my surprise, this was sufficient to get the model into the region of the thermal currents, and that was the finish, as far as I was concerned. There was little or no wind, and conditions were ideal, with strong sun and only a few clouds. The model soared almost vertically, and we were able to watch it until it finally disappeared in the clouds.

The accompanying drawings and text will enable you to build a duplicate of this model.

The construction follows the same general ideas of construction presented in earlier models of this department. We'll point out the important details of the procedure. So let's go.

Fuselage construction. First, make a full-size drawing of the side of the fuselage. The dimensions given in drawing ,#3 will enable you to draw a simple pencil outline, using a yardstick and a sheet of wrapping paper. Cover the drawing with a sheet of wax paper to prevent the cement from sticking.

The fuselage is built up of 4 balsa pieces 1/8 x 1/8 x 36 in. First sandpaper these longerons, removing all saw marks, and then soak them in hot water for several minutes. This soaking will make them flexible, so pin them to the drawing, following the outlines you have made. Let the wood dry before attempting to cement the cross struts in position..." 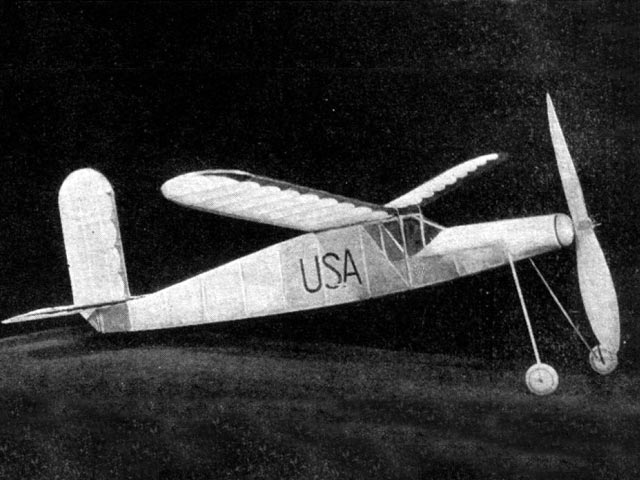